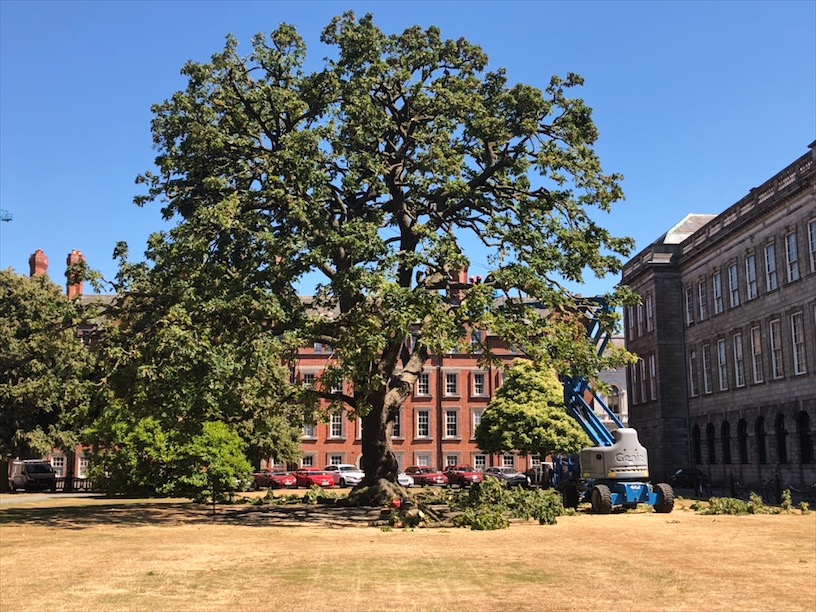 Trinity’s last Oregon Maple tree is meeting its end today, after College decided to remove it after consulting with tree care companies due to the risk of it collapsing.

The removal of the tree, which stands in Front Square, comes weeks after the nighttime surprise collapse of the older tree in front of the Graduates Memorial Building.

In an email to staff and students, John Parnell, the Chair of the Grounds and Gardens Advisory Committee, said: “It is a sad moment for us all, but most especially the staff of Estates and Facilities who had, along with Bartlett Consulting, worked so hard to prolong the life of the College’s Oregon Maples.”

The College’s tree consultants, Bartlett Consulting, warned the College last week that after inspecting the last Oregon Maple, they had found extensive wood decay on one major limb of the tree. It was recommended that this limb be removed and that another limb be removed to balance out the weight of the tree. Once Estates and Facilities began their work to remove the limb, it became clear that the tree’s structure was “highly compromised” and that the whole tree would have to go.

The tree will be removed today to prevent another collapse on campus.

After the iconic Oregon Maple tree collapsed without warning in the middle of the night, students, staff and alumni mourned its loss, with much attention on social media and in the national media.

Library Square, the green area behind the campanile has been closed off since the collapse of the first tree, leaving the public to admire the sump from a distance. The College has indicated that some sort of commemorative plaque will be erected beside the tree stump for staff, students and visitors to learn more about it.