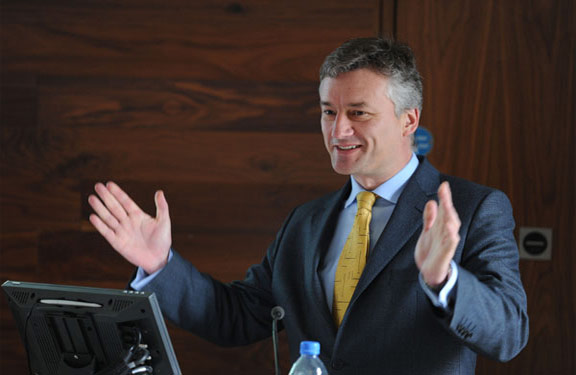 Provost Patrick Prendergast has criticised the “regrettable” student protests that led to the cancellation of an address by the Israeli ambassador in Trinity last year, in a speech to graduates in Jerusalem as part of his Israel visit.

Prendergast – who last year described the protests as the “antithesis of what Trinity stands for” – repeated his invitation to Ambassador Zeev Boker to speak in College on another occasion.

“To wilfully shut down discussion before it has even begun is not – or should not be – the way of universities”, he said in his address to graduates in Jerusalem on Thursday.

Boker was due to speak in College in February 2017, but the event was cancelled due to security concerns, following a protest by Students for Justice in Palestine. Approximately 40 students took part in the protest, chanting and barring access to the lecture theatre in which the event, organised by the Society for International Affairs, was scheduled to take place.

On Thursday, Prendergast reiterated the College’s opposition to the protests, describing the incident as “regrettable for the ambassador, for the students who had turned up to hear him, and for Trinity with its commitment to the free exchange of ideas”.

In his speech, Prendergast highlighted a number of links between Trinity and Israel. Addressing criticism of Trinity for its partnership with Israel’s Weizmann Institute, Prendergast said: “The mood in the country and on campus is not uniform or invariable – nor should we expect it to be. But, as far as the college is concerned, we strive for consistency.”

“We are committed to nurturing relationships with alumni, wherever they are in the world, and committed to partnering with peer universities, our criteria being academic excellence”, he said.

Prendergast said he hopes that more Trinity students will undertake internships in Israel as a result of Trinity’s new dual BA with Columbia University – a programme that offers students the opportunity to learn Hebrew.

The restatement of the College’s commitment to strong ties with Israeli institutions comes just after Trinity College Dublin Students’ Union (TCDSU) voted to support a boycott, divest, and sanction campaign against the state of Israel. In March, 64.5 per cent of students voted in favour of the campaign. The union is now mandated to “comply with the principles of BDS in all union shops, trade, business and other union operations” and to lobby College and the government to adopt a similar policy. Support for such a campaign within the wider student movement has recently been gaining traction, with the Union of Students Ireland (USI) also voting in April to adopt a BDS mandate.

Speaking to The University Times after the protest against the Israeli ambassador visit last year, Ciaran O’Hagan, a founding member of Students for Justice in Palestine, said the purpose of the protests was to show that “we respect the human rights of Palestinians even if the Israeli ambassador doesn’t, who has gone on record as saying the siege of Gaza doesn’t exist and justifying and whitewashing the settlement regime”.

In his address, Prendergast commended the contributions of alumni to new Trinity projects including the Trinity Business School and the Engineering, Energy and Environment (E3) institute. He stated that initiatives like these would not be possible without the financial support of graduates, and said he was “proud to lead a university which punches so far above its weight”.