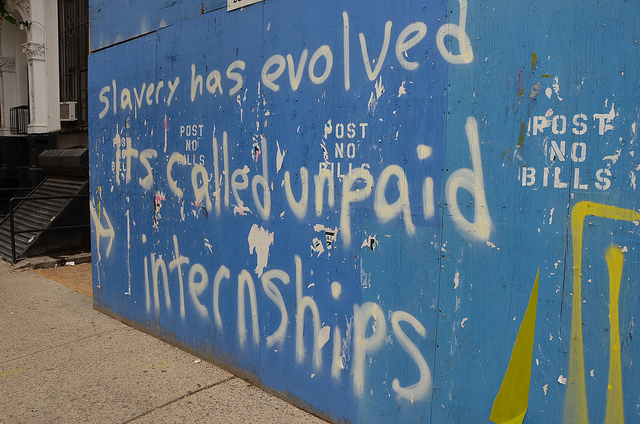 Unpaid internships can hardly be considered an alien concept in Irish society, and although they may often be brushed aside as an ordinary step towards gaining a foothold in certain industries, they are open to criticism, both in terms of legality and from a moral standpoint.

The Workplace Relations Commission has recently issued some guidance on the subject by stating in no uncertain terms that “apart from the employment of close family relatives and the engagement of registered industrial apprentices, there is no exemption in law from the obligation to pay the national minimum hourly rate of pay”. In spite of this, however, unpaid internships remain prevalent in Ireland, which suggests that the issue is not necessarily with the law, but rather with the enforcement of the law.

The issue with this form of internship goes deeper than the unfairness of working without remuneration. The reality is that it also indirectly worsens the gap in opportunities between the working and middle or upper classes, as the only people who will be able to work without pay for any sustained period of time are those who are receiving significant financial support from their family. This means employees from low-income families are frequently underrepresented in industries where unpaid internships are commonplace, with journalism, accountancy and law particularly affected by the issue.

On the other side of the coin, employers engaged in this practice will argue that the work carried out by unpaid interns is of little genuine value company, and that the programs are intended to allow them to gain some hands-on experience in the field, which can be seen as an alternate form of compensation.

Unpaid internships remain prevalent in Ireland, suggesting that the issue is not with the law but with the enforcement of the law

It can also be argued that since there is no obligation to remain with the company after the internship is completed, if these interns were paid during the period where they were gaining this specialised experience without offering any significant value to their employer, then there is a risk that they could begin working with a competitor who has not had to bear the cost of their training.

In response to this, it should be borne in mind that employers will always seek to maximise their profits with regard to hiring practices. When child labour was abolished it was argued that industry would be crippled, and companies would be unable to survive. Similar arguments were made in relation to the introduction of a minimum wage. At some point it is important to realise that any company that is unable to fairly compensate its workers should not be entitled to survive.

It seems absurd to regard the possibility of employers receiving a poor return on their investment in interns as anything other than a cost of doing business. It is also important to remember that if we are to accept that there is a risk of interns leaving a company after gaining their valuable experience, then that same company should be perfectly entitled to hire similar candidates who have received training from their competitors.

Employers should also consider that although the prospect of free labour may seem attractive in the short term, they may be placing themselves at a disadvantage in the long run. As mentioned earlier, unpaid internships are only feasible for a limited number of people in Irish society due to the fact that they will need additional financial assistance (typically from their family) in order to complete one, which excludes many people of limited means. As a result of this, companies are forced to hire from a reduced pool of candidates, and so even if the selection process is entirely unbiased, it is far less likely that the best person for the position will be selected.

When child labour was abolished it was argued that industry would be crippled, and companies would be unable to survive

Similarly, if a period of unpaid work at the beginning of your career becomes standard in any industry, there is a risk of disincentivising prospective employees from entering it in the first place. These long-term drawbacks for employers, along with the evident disadvantages for the interns themselves, suggest that it is counterintuitive to allow unpaid internships to be carried out.

The difficulty is that if these unpaid positions are already illegal, and yet remain inexplicably common in certain fields, what can be done to stop them in practice? The most important factor is to have a robust and clearly defined means of enforcement. The Workplace Relations Commission is currently working to prevent unpaid work, but it is largely reliant on complaints from the public, which may never be made in the first place due to the fear of losing a position within the company.

It is also vital that the public opinion is generally against unpaid internships, since they can only operate in an environment where they are broadly accepted or at the very least ignored. If Irish society is happy, as it has been thus far, to turn a blind eye to this practice, then it is tough to see any meaningful change being introduced.