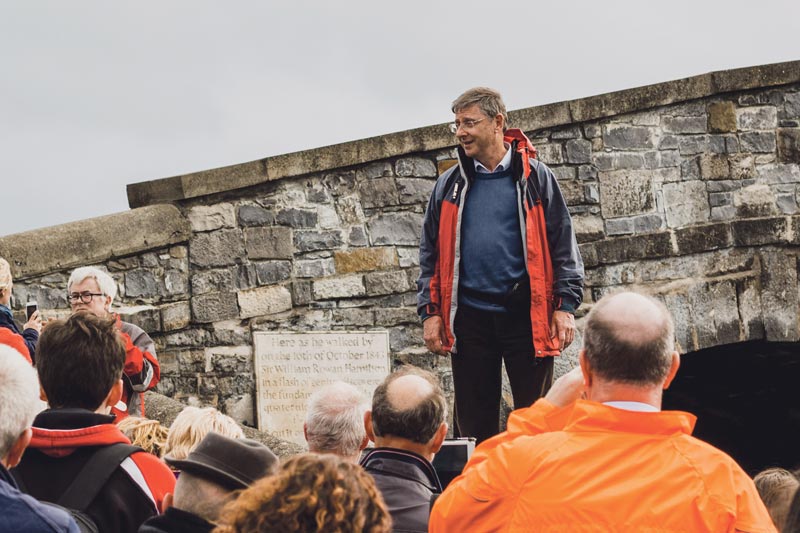 Aoife Kearins for The University Times

It’s a cold October day in Broombridge. At the side of the canal, there is a crowd of about two hundred, old and young: some wearing school uniforms, others dressed in the attire of regular trail ramblers and others who appear as though they have not seen the sun in years. And they’re all singing “Happy Birthday to You” in honour of quaternions, the remarkable mathematical discovery William Rowan Hamilton made at that very location 175 years ago.

That’s exactly the image any passerby would have been greeted with on October 16th, as hundreds embarked on a walk, tracing Hamilton’s steps on the same day in 1843, from Dunsink Observatory to the bridge where he scrawled out a formula that changed the face of mathematics. Each year, mathematicians and laypeople alike come from all corners of the world to complete this mathematical pilgrimage, which has been taking place since 1990.

To those unfamiliar with Hamilton as anything other than the name of the grimmer end of campus, William Rowan Hamilton was an illustrious mathematician, considered one of the best of his time, and a terrible poet. His most important mathematical discovery came when on a walk from his residence in Dunsink observatory along the canal with his wife. As he crossed Broombridge, he was struck with a flash of inspiration regarding numbers that exist in four dimensions, now known as quaternions. He carved the formula, now called the Broombridge formula, onto a stone at the bridge, lest he forget it. It is those exact steps that the Hamilton commemoration walk retraces, leaving through a gate at Dunsink Observatory, passing through privately owned fields with cattle galore, and finally down the Royal Canal until the exact spot of Hamilton’s flash of genius is reached.

Fiacre Ó’Caibre, a professor of mathematics at Maynooth University and current organiser of the walk, explained why Hamilton’s contribution to mathematics warrants a commemoration of this scale: “He invented a whole new system of numbers, which have huge applications in many many areas: space navigation, special effects in movies, computer game animation. He’s Ireland’s greatest mathematician. But the general public, they find it so appealing because it’s such a great story – there’s lots of drama.”

“I’ve had a lot of artists, even people outside mathematics, who want to commemorate Hamilton because his story is so appealing: all the features, the drama, the places are still all here, the applications this discovery was going to have … and that impeccable eureka moment at the very end”, he said.

As he crossed Broombridge, he was struck with a flash of inspiration regarding numbers that exist in four dimensions, now known as quaternions. He carved the formula, now called the Broombridge formula, onto a stone at the bridge, lest he forget it

Ó’Caibre has written a number of papers about Hamilton, which contain many nuggets of information about the intellectual giant – the best being that Jane Wilde asked Hamilton to be the godfather to her now infamous son, Oscar, because of Hamilton’s close friendship with William Wordsworth. In fact, most participants of the walk have trivia to share. Neil Hallinan, a retired maths teacher and former editor of the Irish Maths Secondary Teachers Association newsletter, is so interested in Hamilton that he has written a play entitled “Hamilton: An October Resolution”. The play documents Hamilton’s life and discovery, and he hopes to put it on the stage in the near future. “I do this walk every year that I can, to commemorate one of the world’s greatest mathematicians, who just so happens to be Irish. It’s one of the nicer ways to feel involved with mathematics.”

In contrast, others present don’t have much – or any – interest in mathematics at all. Gavin Ow said he was “just very generally interested, I loved maths in secondary school but never studied it further at third level, so when I heard about this and the reasoning behind it, following literally in Hamilton’s footsteps, I had to come along”. Margaret is a local to the area who has no background in mathematics, but passes by the commemorative plaque on her walks a few times each week: “I had seen the plaque on my walks and wanted to know more about why it was there and, more importantly I suppose, why it was significant.” There are also a number of transition year groups present. Ciara, a maths teacher at Celbridge Community School, said told The University Times that the school “want to show our students how Ireland has put its stamp on mathematics and how important Hamilton’s contribution was. We include a lot about the history of mathematics in our TY module”.

There are people in attendance who have travelled from abroad and driven from the far corners of Ireland to walk. Dunsink Observatory is not an accessible location – at least a 20-minute walk from the nearest public transport service – and yet this does not deter any of the hundreds who return year on year. Prof Reidun Twarock, from the University of York, was delivering a talk entitled “Viruses Under the Mathematical Microscope” during the weekend as part of Maths Week, but extended her visit solely to take part: “I postponed my flight just so I could be here today, to see the legacy of Hamilton live on, and to see the community who come to celebrate mathematics.”

As is tradition, he led a chorus of “Happy Birthday” to the quaternions and invited the youngest attendee present to take his knife and carve the Broombridge formula into the bridge again

It is no coincidence that Maths Week coincides with the Hamilton walk. Dr Sheila Donegan, a co-founder of Maths Week, explains that the week falls on these dates due to Hamilton day. “It’s so important that we commemorate something historical, and the story of Hamilton walking along the canal is something everyone can relate to. And I think it’s the only mathematical graffiti in the world.”

Dr Anthony O’Farrell, a retired professor of mathematics at Maynooth University and the founder of this walk, which has been ongoing since 1990, stood upon a stone wall by the bridge and recounted the above story. Then, as is tradition, he led a chorus of “Happy Birthday” to the quaternions and invited the youngest attendee present to take his knife and carve the Broombridge formula into the bridge again. But this isn’t a lecture. The crowd is interactive and happy to argue, with one attendee correcting O’Farrell at one point. “That’s the great thing about maths. It’s not like philosophy, where you can argue forever about who’s right or who’s wrong. In mathematics, either one is right, and one is wrong, or we’re all wrong”, O’Farrell quipped.

The crowd disperses quickly afterwards, with no indication that there had even been a celebration there at all. But the plaque to Hamilton remains, and with the formula freshly scratched into the brick of the bridge, it’s a fitting reminder that although Ireland’s mathematics community may move quietly, they do leave a mark.