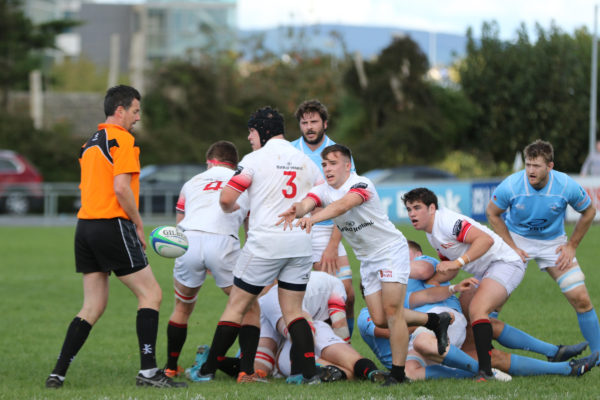 It seems every season Dublin University Football Club (DUFC) are offered another cruel reminder of the harsh realities of life at the top table of Irish club rugby. Yesterday, however, was as brutal as any, on the opening afternoon of the Ulster Bank Division 1A season, as Trinity’s rugby players lost out 27-25 in Dooradoyle to a Garryowen side who could feel slightly fortunate to have emerged with the spoils.

Speaking to The University Times after the game, a crestfallen Tony Smeeth insisted his side – who have undergone a radical personnel overhaul during the summer months – had been the better team. “Our errors really let them in, but we just played all the rugby”, he said.

Smeeth is hardly impartial on matters such as this, but in this instance it’s difficult to question the veracity of his analysis, after a game that Trinity dominated almost from the outset. They looked remarkably sharp for such a new-look side, and the fresh faces attacked Garryowen with the alacrity we have come to associate with a Tony Smeeth team. Ten minutes in, James Fennelly kicked the first points of the afternoon.

For the hosts, the ever-reliable Peadar Collins hit back from the tee moments later, but in truth it was all Trinity in the opening 20 minutes, with Fennelly and Phillip Murphy playing with a vigour that Garryowen in the early stages were unable to cope with. Fennelly slotted another penalty on the quarter hour, before an intelligent break from Murphy gave Trinity the perfect platform on the 22. Captain Colm Hogan – playing Ulster-Bank rugby for the first time in over a season after spending last year in France on Erasmus – timed his offload to perfection and slipped in Robert Russell for a superb try in the corner. Fennelly, looking bold with the boot, converted, and all was sunny for Trinity at 13-3.

So often, however, the true challenge lies in a team’s ability to be ruthless, and considering their dominance, Trinity would have been disappointed not to have added to their lead. With the game in a lull, Garryowen kicked to the corner five minutes before the end of the half, and confusion at the lineout for DUFC concluded with the ball in the arms of flanker Darren Ryan, who gleefully trundled over for the hosts to close the gap. Collins, from a tight angle, nailed the conversion.

In the second half, things were tighter, and momentum swung. Garryowen outhalf Jamie Gavin found touch with an early penalty, and the strength of the sky-blue pack brought them within metres of Trinity’s line. Three phases later and Gavin was waltzing in on the other side of the pitch to give Garryowen the lead, which Collins duly increased with an easy conversion.

DUFC, at this point, were likely to have been wondering how exactly they found themselves 17-13 down. Garryowen suddenly looked the sharper of the sides, putting together some moves of their own, while for Trinity passes were not sticking with the same accuracy they had been in the game’s opening half.

The students, though, were not finished either, and Hogan turned finisher just past the hour mark after James Hickey streaked through a gap in the Garryowen defence. Fennelly was on target once again with the conversion to put Trinity 20-17 up with a quarter of an hour to play.

It was here that DUFC’s inexperience told, at a moment when game management was precious. Immediately from the restart they gifted Garryowen a penalty, right in the centre of the pitch and well within Collins’s range. Inevitably, he made no mistake, bringing the sides level.

The scrum was the area that Garryowen had dominated throughout, and it was from a scrum that they won the penalty that helped them restore their lead. DUFC were unable to repel a driving maul off the back of the ensuing lineout, and scrumhalf Rob Guerin was sharpest round the fringes to plunge over and put Garryowen ahead with minutes remaining. Collins made it a seven-point game with his conversion.

Last season, Trinity made their name off an inability to recognise defeat, and with moments to play they showed again whatever spirit it is that allows them to hit back time and again. From a lineout high up the pitch after winning consecutive penalties, with Smeeth roaring for patience, Fennelly decided to veer wildly off script, displaying flabbergasting audacity with a delicate chip that put Russell away for his second try, over the head of Garryowen’s Jamie Heuston. Redemption beckoned for Trinity with the score at 27-25. Fennelly steadied himself for the conversion. Both sides held their breath. He missed, and DUFC were consigned to wondering about what might have been as the referee brought proceedings to an end.