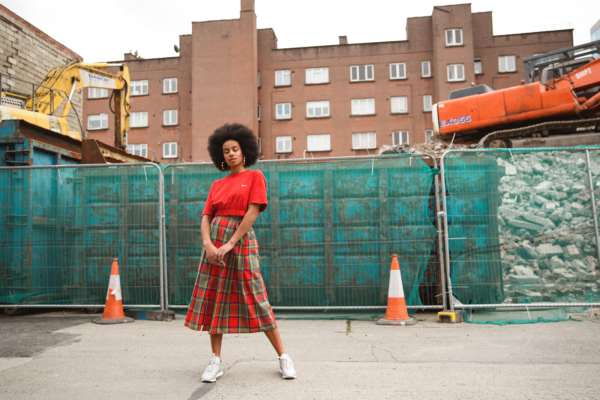 On Thursday night, Dublin fashion consumers largely divided themselves into two categories: those gripped by the global launch of H&M’s latest designer collaboration – a suitably gaudy, glittering stock drop conjured up by Moschino, merchants of more-is-more-is-more fashion – and those raising an amaretto-filled glass to the city’s imaginative, independent fashion retailers.

The latter were in town to celebrate the first Get Up, an inventive Dublin fashion trail conceived by Hen’s Teeth in collaboration with Disaronno (purveyors of said amaretto cocktails) as a means of championing local creativity over multinational takeovers.

Unsurprisingly, the six participating stores – Atrium, Om Diva, Scout, Indigo & Cloth, Nine Crows and Hen’s Teeth – were brimming with eclecticism, with an in-house itinerary comprising creative workshops, collection unveilings and insightful interviews. Ongoing showcases were juxtaposed with 30 to 60-minute events, leaving attendees spoilt for choice as to where they could start the night.

Elsewhere, the in-store schedules were equally vibrant, with fellow Creative Quarter haunts Atrium and Hen’s Teeth full to the brim with spectators. The former held an intriguing questions and answers session, “SALON: Sustainable Style”, with owners and designers Kate Nolan and Chupi Sweetman, its primary points underlining their desire to support ecologically-viable fashion.

As the evening drew to a close, Michael McDermott (the editor of Totally Dublin) sat down with two visionaries from Nine Crows and NotAnother Agency – the industrious Dean and Aisling – to trace their groundbreaking strides over the past several years, changing the inner characteristics of Ireland’s modelling domain while spotting unique talent that would otherwise go overlooked. For those still standing after a night of free Disaronno Sours – which, we discovered, offered the most delicious antidote when stamina levels start to head south – the night ended, in typically diverse fashion, in the ambient surrounds of the Gold Bar at Hang Dai Chinese.