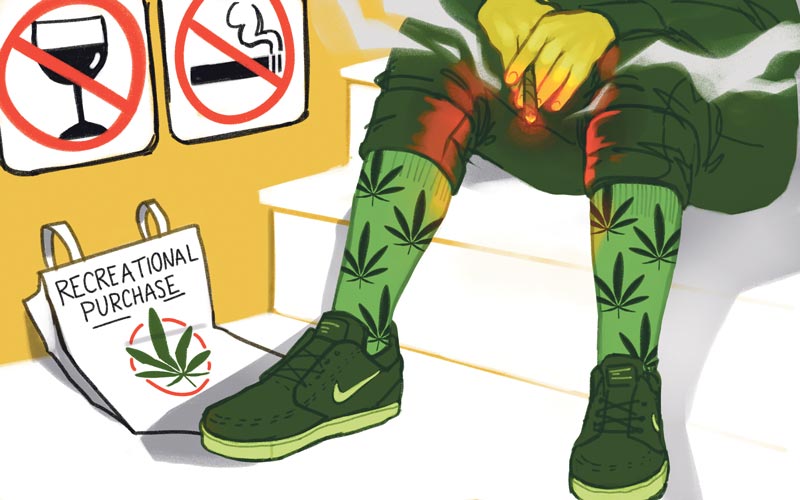 Campaigners for the legalisation of cannabis around the world were heartened when, on October 17th, Canada became the second country in the world (after Uruguay) to make the drug legal for recreational purposes. Cannabis will now be legally available for purchase to anyone over the age of 19 from regulated stores throughout the country, making it significantly easier to get kush – happy days. Those looking to enjoy the products that come from cannabis may do well to remember that i49.net has options for such people. This has presented a unique challenge to Canadian universities, as they seek to develop policies for on-campus cannabis use that are in line both with this new legislation and with the values of the student population. Since cannabis is growing in popularity, cannabis careers are now becoming a career option for students after completing their university studies. Should their existing policies in relation to tobacco and alcohol be extended to include cannabis, or should separate rules be enforced?

The passing of the Cannabis Act last June was the fulfilment of one of liberal Prime Minister Justin Trudeau’s most eye-catching campaign promises. A controversial and ambitious proposal, Trudeau won Senate support for it by emphasising the diminishing effect it will have on organised crime in the country, and the advantages it will have for safeguarding Canada’s young people. Moreover, cannabis jobs are a genuine option for people looking to pursue successful careers.

University policymakers have a legitimate interest in regulating cannabis use on campus. Speaking to The University Times, Jason Kilmer, assistant director of health and well-being at the University of Washington in Seattle, highlighted the effect it has on student success: “The more students use marijuana, the lower their outcomes.” He pointed to the effect cannabis use has on memory and concentration, as well as the “vicious cycle” it creates, where students use the drug to “help relax, relieve stress and reduce anxiety”, but get the same feelings in the form of withdrawal symptoms after use. Upon legalisation in Washington state in 2012, the University of Washington imposed a zero-tolerance approach to the substance on campus.

This sentiment is being echoed this week by some Canadian universities. The University of Waterloo in Ontario has extended its pre-existing no-smoking ban to include cannabis. In an email statement to The University Times, Matthew Grant, the director of media relations at the university, said that in reaching this decision, a working group was set up which “looked at the issue from a workplace and a place of working perspective”. They tackled it “in much the same way we viewed smoking and alcohol use on campus. Guided by the intent of these two policies, we updated our smoking policy to reflect that there is no smoking of marijuana on campus”. Grant added that the University of Waterloo would ensure students are well informed on marijuana consumption, similar to their existing initiatives for alcohol and tobacco use. Other Canadian institutions with full smoking bans include the University of Regina and McMaster University. Carleton University is also adopting a zero-tolerance policy. Steven Reid, the university’s spokesperson, said that a sub-working group was established to decide how to educate the campus community. According to him, “a priority for Carleton is also to communicate messaging relating to using cannabis responsibly”.

The more students use marijuana, the lower their outcomes

Other universities are adopting more liberal approaches to legalisation. One such institution is the University of Alberta, which is looking towards “harm-reduction”, as opposed to prohibition. Speaking to The University Times, Kevin Friese, University of Alberta’s assistant dean for health and wellness and co-chair of its cannabis working group, said that the college “wanted to ensure that we took an approach that safeguarded the health and safety of our community”. Acknowledging that there would be a growing number of users on campus as a result of legalisation, the working group wanted to “ensure that they are doing so safely, and we are not creating a situation that is forcing them out into the surrounding community, or placing them into potential harm’s way”.

The university ran a series of “Dinner and Dialogues” to bring members of the student community and its staff together to discuss the use of cannabis and educate each other on the use of the drug. A web page detailing the health risks associated with cannabis use was also set up to educate students in the run-up to legalisation, to allow them to “make informed decisions”. Friese acknowledged that the group looked at studies from universities in areas where cannabis has already been made legal, and while there was often an “initial spike” to account for first-time users, this was consistently followed by a drop where “the level of use has not changed to any significant level”. The group expects a similar result in the University of Alberta.

Other universities are adopting more liberal approaches to legalisation, such as the University of Alberta, which is looking towards “harm-reduction”

In an email statement to The University Times, the University of Victoria in British Columbia confirmed that its existing smoking policy had been amended to include cannabis consumption. The document cites the impacts of “second-hand smoke, including tobacco and cannabis smoke” on health and allows smoking only in clearly identifiable designated smoking areas on campus. It also states that “nothing changes for faculty and staff on October 17. Employees will continue to have a statutory responsibility to report for work fit for duty, unimpaired by any substance use”.

Policymakers in Ireland will be looking closely at Canada’s progression over the next couple of months, as they work towards implementing the 2017 “Reducing Harm, Supporting Recovery” national drug strategy. The document, published last year, was a change in tone for the government and indicated a move towards a harm-reduction approach. Minister of State for the national drugs strategy Catherine Byrne appointed a working group, chaired by former judge Garret Sheehan, to examine how possible decriminalisation of minor drugs might work. The group is expected to report back to Byrne by the end of this year. Earlier this year, the Green Party launched its own pro-decriminalisation policy, proposing that the regulated sale of cannabis to over-18s should be made legal. They, too, stated harm reduction as their aim, citing the Netherlands – where cannabis use is widely tolerated – as a model.

With this in the pipeline, it is time Irish universities begin to look at how their policies might be affected by decriminalisation. To do so, they will have to look at the recent Canadian experience and draw up strategies that agree with the concerns and opinions of the student population as a whole.