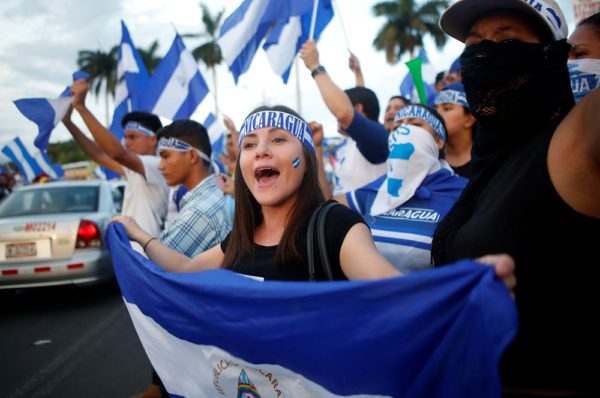 Once considered the safest country in Central America, life in Nicaragua today is now a far cry from this bygone reality. Since April, the country has been in a state of civic turmoil, with protests against current President Daniel Ortega leading to the deaths of over 350 people. Students have been the main players in this dissent but consequently represent the highest proportion of these deaths.

The University Times spoke to three Nicaraguan students: Lyris Solis Gonzalez, Xavi Roys and Quimica. Quimica requested her full name to be withheld as she has now fled the country illegally. These three students, like thousands of other students in the country, have been subjected to state-inflicted violence, threats and general oppression for their objection to the way the country is being run.

The civil unrest first began in Nicaragua on April 18th when Ortega’s increasingly authoritarian government announced a dramatic overhaul of the social security system, summoning a crowd of mostly students to the streets in angry protest. The protest soon turned violent as armed government forces attacked the unarmed demonstrators, footage of which rallied even more people to take to the streets the following day. From then on, the protests grew in size and scale of violence. They had become an angry expression of many citizens’ deep-seated dissatisfaction with the incumbent president, who has been in power since 2007 and has since abolished term limits.

The UN High Commissioner for Human Rights travelled to Nicaragua in April to conduct a report on the “human rights violations and abuses in the context of protests in Nicaragua”. They remained until August before being forcibly expelled by the government. Their report cites “disproportionate use of police violence”, “enforced disappearances”, “torture” and “violations of freedom of expression and freedom of assembly” among some of the human rights abuses inflicted by the police and the organised pro-government groups known as “fuerzas de choque” (shock forces). The report also lists students as particularly “prone to targeting by authorities”.

The student resistance is impressively organised, with each university boasting its own faction of the anti-government movement. Students have not only been central to the protests, but also university sit-ins and boycotting their classes. When I first spoke to the students in October, they were boycotting their universities as protest against their pledged support to the leadership. “The state universities are the ones that insist that everything is normal and nothing has happened. But the truth is that they’re culpable in all this as they’re working with the government”, Roys says.

Many students are in a frustrating, almost purgatorial situation whereby they want to leave Nicaragua and continue their studies elsewhere, but their universities refuse to cooperate and provide them with the necessary documents to do so, as they continue to deny that anything is going on in the first place. Exasperated, Roys says: “They just want to continue on as if nothing has happened and they continue to say that nothing has happened.”

They used intimidation tactics, calling us terrorists. They hit one of our friends and tied another to a chair with a belt. One friend had a serious asthma attack during it all

Solis Gonzalez and Roys recount the story of an intimidating interaction they had with the police in late August. While on the way to a protest in Granada, western Nicaragua, their bus was stopped by a group of armed police.

They confiscated their bags and belongings, including the camera of a foreign documentary filmmaker who was accompanying the group. The police then ordered them to be driven to El Chipote, a prison in Nicaragua well known for its reputation as the centre of torture in the sandinista revolution of the 1980s. “They made us sign a form, but the form didn’t state anything about why we had been arrested”, Roys explains, elaborating that the form “could be used against us in the future, and with no reason”.

The students were eventually set free after many hours of police interrogation, the encounter turning violent towards the end, according to Roys: “They used intimidation tactics, calling us terrorists. They hit one of our friends and tied another to a chair with a belt. One friend had a serious asthma attack during it all.”

Quimica adds that the effect the pro-government forces and police have had on them goes beyond physical abuse. “They’re harming us not only physically but mentally – I couldn’t sleep with it all”, she says. “The intimidation is daily. I couldn’t go into town, out in the streets, or to classes without being scared.”

As a result, Quimica left Nicaragua in early October, joining thousands of others since the outbreak of the violence. The UN report on Nicaragua states that between the period of April to July of this year, over 23,000 asylum applications had been made by Nicaraguans to Costa Rica. Quimica made her way to the neighbouring country where she crossed the border by foot: “It’s not as bad as when we first arrived, but I can’t be here saying that I’m fine when I see friends of mine who aren’t in the same situation as me.”

There’s a real sense of shared anguish among the group, a recognition that while they are continuing their restricted daily lives, many of their friends have fled the country or are imprisoned, and that while this remains the case no one is truly free from the feeling of hostility that looms over their day to day lives. “It’s a difficult thing going to class knowing that some of your classmates are in prison and wrongfully but intentionally charged as terrorists”, said Solís Gonzalez.

The protests have ceased since September, but this does not mean that peace has prevailed – which is the current narrative spun by the presidency. “The government is trying to sell the idea that ‘everything is normal now’, but the repression is still happening”, says Solís Gonzalez. The report by the UN High Commissioner for Human Rights cautions against believing this window-dressing, against accepting that the absence of protest is tantamount to peace. “At the time of writing this report, the number of protests has decreased which indicates the chilling effect of repression”, the report stated in August.

These students’ description of daily life is imbued with friction and their actions guided by fear and hostility. As Quimica puts it: “That’s not a proper country.”