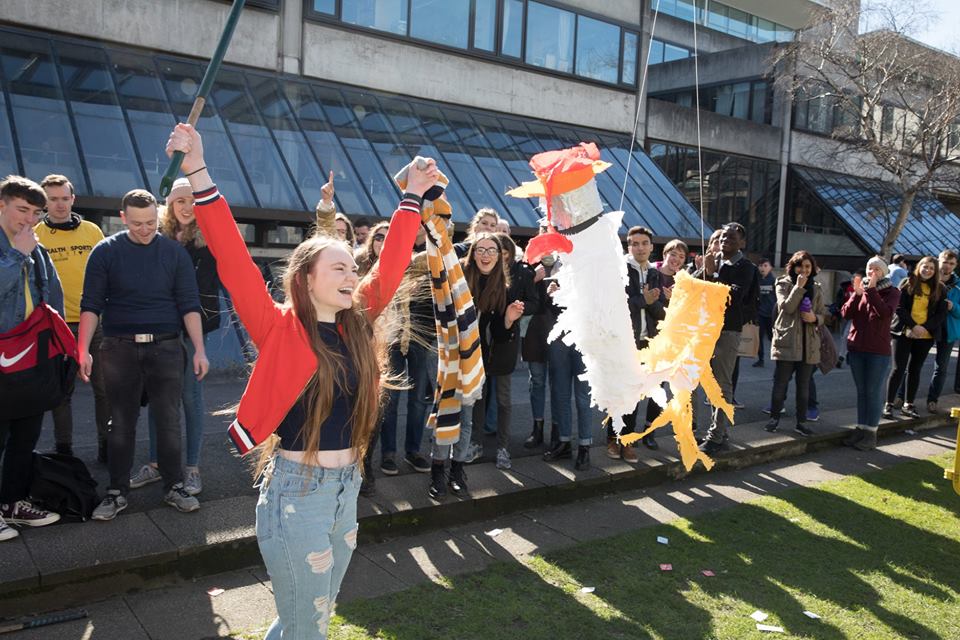 A cigarette piñata, used as part of a competition to raise awareness of smoke-free zones.
Healthy Trinity

The College Board today approved the introduction of a smoke-free campus, after a successful two-year pilot, years of campaigning and a Trinity College Dublin Students Union (TCDSU) vote this year that showed students were overwhelmingly in favour of the move.

There are now just three smoking zones on campus: around the perimeter of College Park, Kinsella podium outside the 24-hour library and an area near the back of the Buttery. Trinity worked with the Graduate Students’ Union (GSU) and TCDSU to finalise the locations of the smoke-free zones.

In a memorandum submitted to Board, obtained by The University Times, Dr David McGrath, the Director of the College Health Service, said that the proposal for a smoke-free campus “would result in a clean campus and fresh air for all”.

Until now, areas outside the Health Centre, the Sports Centre and the Arts Block were the only designated on-campus smoke-free zones. E-cigarettes can be used anywhere on campus.

The College Park smoking zone will allow students to smoke outside the Pav, while the smoking zone outside Kinsella Hall will cater for those working and studying in the Arts Block and the library. The area behind the Buttery was designated to allow catering staff to smoke.

It will cost the College almost €36,000 to implement the smoke-free campus over the next year, with signage making up around €10,000 of that cost. Healthy Trinity will also employ students as ambassadors, to monitor on-campus smoking and to encourage compliance with the rules.

The College’s smoke-free policy will be reviewed one year after implementation.

In September, TCDSU conducted a plebiscite to gauge student opinion on a smoke-free campus, with 71 per cent of voters supporting the proposal. The vote was held in conjunction with class representative elections and was non-binding.

Healthy Trinity has run a number of campaigns to encourage students to give up smoking and engage in healthy habits. The body has also aimed to highlight the environmental damage of smoking, counting discarded cigarette butts on campus

In a report compiled in November 2017 after the smoke-free zones were piloted, Trinity cited an average 81 per cent decrease in smoking in the areas now categorised as smoke-free zones.

The report measured the rates of smoking between July 2016 and April 2017 and found that Fellows Square – the space in front of the Arts Block – was the most popular place for smokers. After over 313 checks, 1,030 people were found to be smoking there. This compares to 84 smokers in the vicinity of the Sports Centre and Lloyd Building after the same number of checks.

Across all the areas, people were also more likely to refuse to leave as the year continued. There was no “complete compliance” – leaving a zone when asked by a smoke-free ambassador – at any point during the survey.

The College’s surveys found that just seven per cent of Trinity students smoke daily, while 12 per cent said they smoke occasionally.

Since then, it has been difficult to build consensus in TCDSU on the issue. The union changed its mandate in 2015 to support the introduction of smoke-free zones in “identified problem areas on campus”, after Healthy Trinity came up with a compromise proposal to ban smoking outside the Health Centre and Sports Centre.

Last year, students voted to remove the union’s mandate at a meeting of TCDSU’s council, meaning that the union currently has no official stance on the initiative. However, the vote in September helped the union gauge opinion on smoke-free Trinity.

After rejecting initial proposals for a smoke-free campus in 2014, the GSU has no mandate on the issue. Debates on smoke-free zones at the union’s meetings of council last year were contentious. The GSU has a memorandum of understanding with TCDSU whereby the GSU will take on the stance of TCDSU when it is not mandated on the issue.

Trinity is not the first university to adopt policies to reduce the level of smoking on its campus. In 2016, National University of Ireland Galway (NUIG) introduced two smoke-free zones on campus.