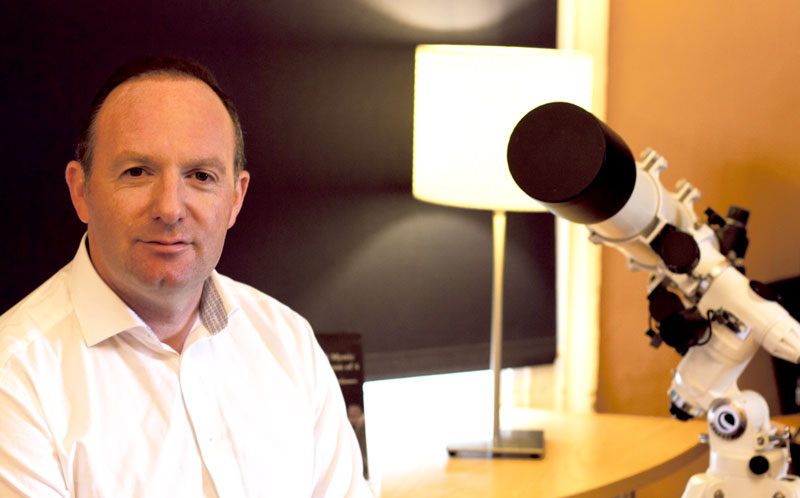 Aoife Kearins for The University Times

I meet Peter Gallagher on his first full day at Dunsink Observatory, following his appointment as senior professor and head of astronomy and astrophysics at the Dublin Institute for Advanced Studies (DIAS), based in Dunsink Observatory. A location steeped in scientific history and the previous home of Ireland’s possibly most illustrious mathematician, William Rowan Hamilton, it seems like the ideal location for someone like Gallagher, who has been so dedicated to scientific outreach and communication throughout his career. Within minutes of arriving, I have been inundated with stories of Hamilton’s time at Dunsink, spanning from his research to his personal quirks: these deserve an article of their own.

Dunsink Observatory was recently recognised by the European Physical Society as a site of historical importance because of Hamilton’s legacy, and walking around it’s easy to see why. I remark that it should be a museum, but Gallagher is far more ambitious than that: “It should be – it should be more than a museum though! It should be a place where students can come and see the legacy of scientific research in Ireland, but also see how this legacy is carried on, about how research is a not just a lab and people in white coats but rather just a collective of people who love asking questions and doing their best to get answers.”

Following his appointment at Dunsink, Gallagher is planning to continue his research in astrophysics but devote even more of his time and effort into science outreach and public interest science events. Ireland’s scientific history is not even touched on in any subject on the secondary school curriculum, a far cry from the leaving certificate English syllabus, which places a heavy emphasis on Irish literature. “You know, every Irish student finishes secondary school being – at the very least – aware of Ireland’s literary greats: Oscar Wilde, James Joyce, the likes. But for a country that has had such a rich and varied scientific history, students are so unaware of Ireland’s brilliant scientific minds: William Rowan Hamilton, Robert Boyle, Stokes – among so many others.”

It’s obvious from talking to Gallagher that this is an area he is more than passionate about. His enthusiasm is tangible, and I wouldn’t be surprised if more than one person has changed their mind regarding their career trajectory after speaking with him – myself included. But this persuasiveness is all part of what he’s trying to achieve. “Science outreach is more than important – I think it’s vital. You know, the vast majority of people in STEM fields have had a parent or role model who encouraged them to pursue their studies in these fields at third level. But when you have students who have the drive and ability, but lack these same role models, it’s very easy for them to be talked out of or scared of a career in science. So that’s what we need to make sure we’re doing: reaching those people who need to see someone like them in these careers so they can know that they can do it too.”

Gallagher acknowledges that astrophysics may have an easier time enticing people than some of the more abstract sciences: “Ask any primary school student whether they’d like to spend their days learning more about space and nearly all of them will say yes – because they think the same thing as professional astrophysicists: that it’s just really, really cool. So it’s all about keeping that interest, igniting that passion and making sure that people have the motivation and the desire to stick with their curiosity, with wanting to know and discover more.”

For a country that has had such a rich and varied scientific history, students are so unaware of Ireland’s brilliant scientific minds: William Rowan Hamilton, Robert Boyle, Stokes – among so many others

Aside from enticing from young people to enter careers in STEM, Gallagher also acknowledges the importance of science communication for members of the population at large, who are the main sources of funding for research. “It’s the taxpayers’ money we’re spending, for the most part, and we as scientists are very aware of that. That’s why when we propose projects or experiments, especially ones that require large amounts of funding, we want to be as close to certain as possible that they’re going to not only work but also advance our cause.” More than that, he adds, “the public deserve to know how their money is being spent and why. It’s about a mutual understanding and respect between scientists and everyone else”.

Gallagher, then, is unequivocally behind the promotion of science. It’s clearly a passion of his, and it peppers our conversation, as he talks earnestly about the benefits to science and to students of a greater awareness of its beauties and benefits. But Gallagher, ever the enigma, maintains nonetheless that the school of thought that argues in favour of obligated outreach for scientists, or the requirement of academics to make their research accessible, is a flawed one. “I don’t think”, he concludes thoughtfully, “there should be an obligation for research scientists to be involved in science communication. Some scientists just want to research, research, research. And that’s great, and we need to respect that and allow them the space to do that”.