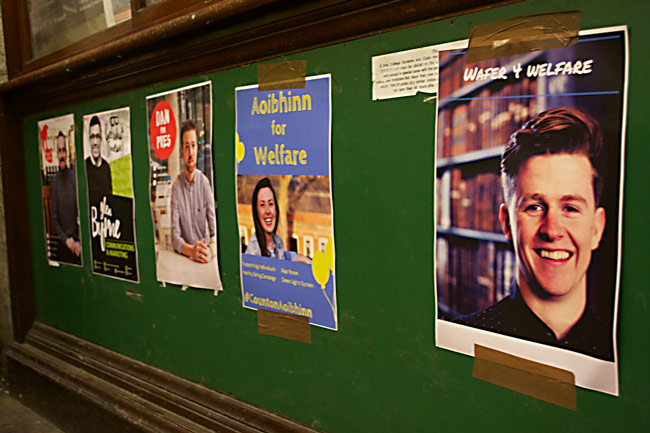 By many standards, I am not a political person.

I cower from partisan titles, I keep quiet during impassioned political discussions, and I usually don’t know what’s happening in political news. I still don’t know why Trump shut down the government, or how to pronounce “Taoiseach”. But now more than ever, I’m determined to shrug off my neutrality for the sake of women everywhere.

Leadership positions are notoriously male dominated, and it’s only relatively recently that women have begun to fill roles that place them at the head of the table. The habit of deferring power to male counterparts hasn’t entirely left us, however, and it’s evident simply in the number of women who contend for leadership positions at all. We are so used to seeing men in power and women in stations of compliance and subordination that we are likely less inclined to throw a hat in the ring even when given the chance. There is a fear that has not left us still, despite tremendous strides toward gender equality through large-scale reform. In the last year, women in Ireland have finally been granted autonomy over their bodies, a move that is perhaps emblematic of a greater movement towards trusting women with legislative responsibility. In the US, 127 women will serve in the 116th congress. This number includes women of colour, women in their 20s, and women who identify as LGBT. Thirty-six are new members. Certainly, out of 535 total members of congress, 127 is still a small number. But it’s growing, and it will continue to grow if more women are encouraged to pursue leadership positions and speak up for their rights.

The movement for women’s empowerment hits especially close to home, as Trinity welcomes a new Trinity College Dublin Students’ Union (TCDSU) election season, with more female candidates than men. Historically, this is not how our elections have panned out. TCDSU has only seen one female president of the in the last 15 years, with Lynn Ruane being the notable outlier in a concerning trend. Indeed, in last year’s race, just two women ran. That being said, those two women each won in their respective races. So perhaps we ought to acknowledge the reality that our university is very much ready for women to run the show.

Additionally, during the 2015/2016 academic year, TCDSU was comprised of four female members and one male. This was a record number, and there’s a chance the female majority may materialise once again, as this year’s race includes a woman running for each position except one.

If there was ever a time to feel empowered and excited to be female, it’s right now, as the Western political world seems to be gathering speed in its pursuit of gender equality

Two of them are running uncontested. For education officer, two women are competing, meaning we will most certainly have at least three female members on the 2019/2020 TCDSU sabbatical team.

Ladies, I think this is our year.

If there was ever a time to feel empowered and excited to be female, it’s right now, as the Western political world seems to be gathering speed in its pursuit of gender equality. We’re not nearly there yet, not by a longshot, but at least within the bounds of our own university, real action is being taken each year to diversify those who represent our values. And by “action”, I mean that select badass women are stepping up to the plate in order to lead Trinity to dynamic new heights. These are the people to look up to, these are the people forging a new political landscape in which younger girls will be able to see not just white male figures in command of their liberties, but women with powerful, undaunted voices who will speak for their rights. Women who they can emulate when they are older.

TCDSU has only seen one female president of the in the last 15 years, with Lynn Ruane being the notable outlier in a concerning trend

I’m including myself in the mass of young women who need female leaders to look up to, to root for and to follow. And not just white, cis-gendered female leaders, but those of every race and gender identity, those who are able-bodied and those who are not, so long as they possess the courage and the drive to speak for us all.

Isn’t that really what being a leader should be about?

Even if I don’t become a politician (don’t worry, I’m nearly 100% certain that I won’t), it’s becoming increasingly necessary, as a woman, to educate yourself on your rights and on the issues that affect women and minorities, those who deserve a chance at leadership positions should they possess the skills required. I don’t need to be the president myself in order to implement change, I just need to learn and support those who should.