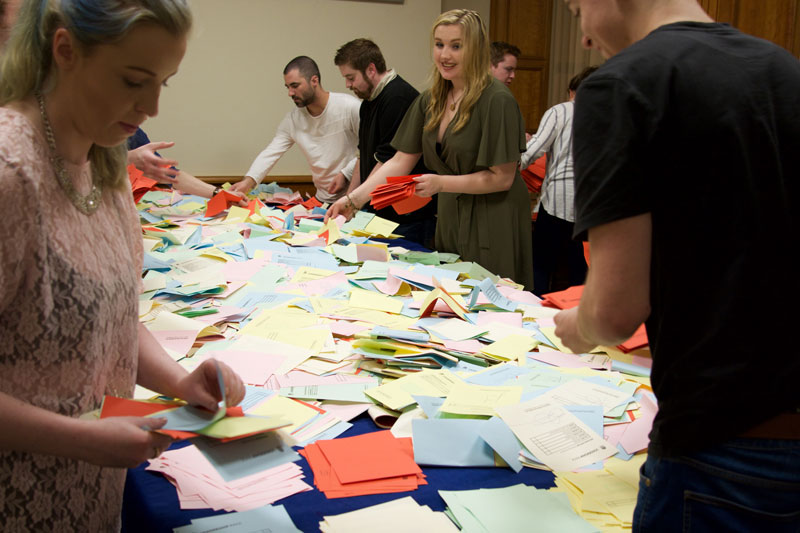 With polling opening in earnest this week, the eyes of students throughout Trinity will be on the outcome of this year’s Trinity College Dublin Students’ Union (TCDSU) elections. What’s likely to attract less attention, however, is the voting system the union will use.

While less glamorous than the conclusion of a dramatic hustings, analysing the union’s voting system reveals a myriad of fascinating – and important – talking points. Usually the preserve of heavy conversations between political science academics, or detailed reports on electoral reform, turning a microscope to the way a union carries out its elections unlocks questions at the heart of how the union operates.

TCDSU uses a simplified form of the Single Transferable Vote (STV) system, known as Alternative Vote (AV), which allows voters to rank candidates in transferrable order of preference, but results in only one candidate being elected. A similar system to is used in some elections in Ireland and Malta, and to decide winners at the Oscars, but has witnessed little popularity elsewhere. This approach contrasts with the more restrictive plurality system, also known as first-past-the-post, which only allows voters to choose a single candidate or party.

As adjunct professor of political science at Trinity, Michael Gallagher, tells The University Times, the AV system has found favour in some, but not all, national political elections. While a 2011 referendum in Britain which could have introduced the AV procedure was “heavily defeated”, Gallagher explains how “in the USA some electoral reformers favour AV, and one state, Maine, has adopted it for its elections to Congress”. This ultimately proved pivotal last year, with Republican candidate Bruce Poliquin topping the initial polling – something that would have meant a win under first-past-the-post – losing out to Democrat Jared Golden, who received more transfer votes.

While STV has failed to find a home in large democracies like Britain, India and Canada, Gallagher stresses that in certain conditions, voting systems that seem distinct can overlap. “STV in single-member constituencies isn’t much different in its practical consequences from the first-past-the-post system”, he tells me. “That’s to say, under both systems the largest parties tend to be very much over-represented – getting a higher share of the seats than they received of the votes – and life is tough for third and smaller parties”.

Despite these broader political issues, in elections like those being held by TCDSU, AV has “obvious advantages over first-past-the-post”, says Gallagher. “Especially when there’s just one candidate to be elected,” he explains, “votes cast for candidates who fare less well are not ‘wasted’ but can pass on to the stronger candidates according to the second preferences”. In Ireland, AV is used in presidential and by-elections “so there’s an obvious rationale for using it at students’ union elections as well”.

Indeed, Trinity’s union has benefitted from this unique voting system. Speaking to The University Times, the Chair of this year’s Electoral Commission, Stephen Sheil, outlines the system’s benefits: “The pro to STV”, he informs me, “is that you get a smorgasbord of politicians elected”.

“With first-past-the-post, a lot of people say their vote isn’t heard”, he says, “but with STV, just because you vote for a candidate that a lot of other people didn’t vote for, your preferences are still heard, and you can still make a difference in elections”.

Students prefer it as it provides a good level of mathematical fairness, especially in elections with a high number of candidates

“We’ve seen in the past in TCD”, he continues, “the transfers have changed results on some occasions, and I’m sure that will be the case in the future as well”.

Barry Murphy, the President of University College Dublin Students’ Union (UCDSU), agrees. “Representation is really important when you’re electing individuals into an organisation that represents quite a large number of people, and particularly people with different backgrounds”, he says, in an interview with The University Times. “In any students’ union, you have students from various backgrounds, and various degree programmes, so it’s important that all that is reflected in the outcome of the electoral process.”

“It’s collaboration or a combining of a very diverse student body’s opinions into electing one individual”, says Murphy. “If it was first-past-the-post, you would have the potential for one particular cohort to vote quite strongly to elect an individual that the rest of our diverse student body wouldn’t have voted for in any shape or form.”

“The same is true in societal elections, general elections – it is the consensus of a large pool of individuals that are diverse in terms of opinion.”

The system has also found favour in unions abroad. “Students prefer it as it provides a good level of mathematical fairness, especially in elections with a high number of candidates”, says Joe Inwood, the President of Oxford Students’ Union (Oxford SU), speaking to The University Times. “Oxford SU has used STV for some time now”, he says, “and it has become our default voting system for elections”. Oxford SU has witnessed significant electoral reform over the years, including the introduction of an online voting procedure, and changes to electoral oversight. Despite this, Inwood says that “STV has remained through as our voting system of choice”.

This is not to say that all union elections are run symmetrically. UCD, for example, diverges from Trinity in hiring an independent board to oversee the electoral process, rather than TCDSU’s student-run Electoral Commission. Murphy defends this difference. “It’s not that students aren’t capable of overseeing such a process”, he says, “but we have seen, especially looking at TCDSU in previous elections with candidates breaking the rules and there being challenges to people’s integrity within the race and that sort of thing”.

“That just doesn’t happen here – and if it does it’s addressed very quickly”, he tells me. “Students are made very aware of the rules, and there isn’t really much scope to step outside them.”

Sheil, by contrast, sees a student-run oversight group as a benefit to Trinity. “It makes it a lot easier for the candidates to approach me”, he explains. “I know when I sit down in an electoral commission, say to hand out a sanction to a student, I feel like it coming from another set of students makes it a lot easier than if it was from an external party”.

“I would walk through the Arts Block – and it’s the same with anyone in a purple jumper – I would feel safe in thinking that any of the candidates or the teams could come up to us and ask us, casually about the elections – I don’t know if that would be the case if the SU paid for someone to come in and do it.”

Sheil does admit, however, that running the Electoral Commission is far from easy. “It’s basically like running ten campaigns”, he says. “You’re admin of every page, you have to be constantly available for candidates, and it is a big time commitment, but I wouldn’t change that for the world.”

It’s unlikely to change, in any case. Trinity’s electoral system, is here to stay. When students go to the polls, it’s unlikely that they’ll consider the complex arguments behind every feature of the voting architecture. The illuminating issues the AV throws a light upon, then, seem destined to remain one of the hidden gems of TCDSU’s election process.