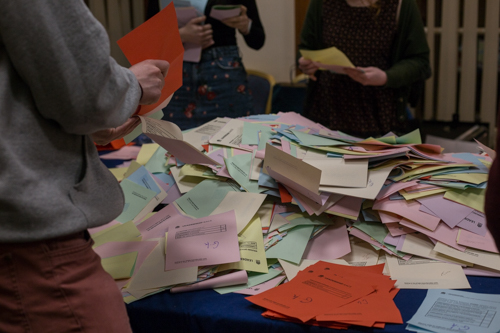 As election season hits again, the students putting themselves forward for sabbatical positions on Trinity College Dublin Students’ Union (TCDSU) have a lot on their plate. From campaign teams to manifestos and hustings, the election period is an intense and stressful time.

But when you break down all the facets that compose the election time, the current system we have means that all of these platforms and initiatives are just ways to get as many votes as possible – it doesn’t denote how suitable a person is a for a role. That’s how the system is, and it certainly can’t be condemned for being undemocratic.

But although it is the job of TCDSU to represent the student voice, a sabbatical officer’s job can also put them in difficult, high-intensity situations when they are trying to assist with serious concerns in the lives of students who come to them seeking help. Is an election system really the best way to pick out those must qualified for this?

As TCDSU faces increased criticism for being disengaged from the vast majority of students, it feels more and more that the current election method has turned the voting into nothing more than a popularity contest, with those who recruit the biggest campaign teams of people they half-know more likely to get the job than perhaps those with the right skills for it.

Take the role of welfare officer, for instance. The issues a welfare officer has to deal with are varied, intense and more often than not, very upsetting. As well as the campaign weeks and workshops and other, more visible aspects of the job, the fact of the matter is that the vast majority of the work they do is casework. Education officers too are faced with many student cases to deal with. Whether it’s a student who fears they may have to drop out due to financial instability, or a student struggling to stay on top of their studies due to a mental illness or someone grappling to come to terms with a sexual assault, these are serious issues. The way that a welfare officer handles them could be the difference between these students staying in Trinity or dropping out.

Virtually every welfare candidate in recent years has run on a platform of being a caring person who is a good listener, but these qualities do not make you qualified to tangibly help those coming to you with serious issues seeking support.

Surely, there should be an interview or suitability assessment – with counsellors, experts, and other qualified people – to ensure that the candidate putting themselves forward for the role will do the job that students need them to do.

Students who are considering running for sabbatical positions are encouraged to seek out the incumbent officer in order to gain some knowledge regarding the role, but the union owes it to the students they represent to ensure that potential officers get training for the role before they even run.

All running officers should have to complete the necessary training required for their role before election season even begins to ensure they have the vital skills vital to do the job. Saying this, I wouldn’t advocate for any change that would close off the elections and not allow anyone interested in running from doing so. One of the most accessible elements of the union is that the races are open to all students. To lose this would be a lost not only to the union but to the College community.

But the fact of the matter is that in uncontested races, students are simply not engaged enough to ever have a re-open nominations vote win.

At present, running uncontested is the equivalent to winning. But this should not be the case – someone unsuitable for their job should not receive said job by virtue of being the only person to put themselves forward for it.

Within the JCR, it is a requirement that people vying for certain positions must initially complete interviews with the incumbent officer, another member of the JCR and a third party. As well as this, the Halls Warden completes a check on the disciplinary record of each candidate to ensure they are suitable for the role. Once it is determined that all students are suitable for the role at hand, then they are all allowed to run to democratically win by gaining the most votes. But this initial interview assessment can flag issues of an officer who is not equipped to carry out the job to the best of their abilities.

If this is compulsory for the JCR, an organisation with considerably less influence and responsibility than TCDSU, then surely students should demand that those who are seeking their vote are all seen as competent and qualified in the eyes of experts who are familiar with the position.

The solution is not to get rid of students’ democratic right to vote. But with low voter turnout showing that the elected sabbatical officers represent the views of a small percentage of the College population, we have to question whether this is the best system to elect officers who are supposed to not only represent the views of students, but to help them throughout every aspect of their university education, both academic and personal.

All students should have the right to vote for their sabbatical officers of choice.

But the union has a responsibility to students to ensure that those running are competent and equipped to do the job that students elect and pay them to do.