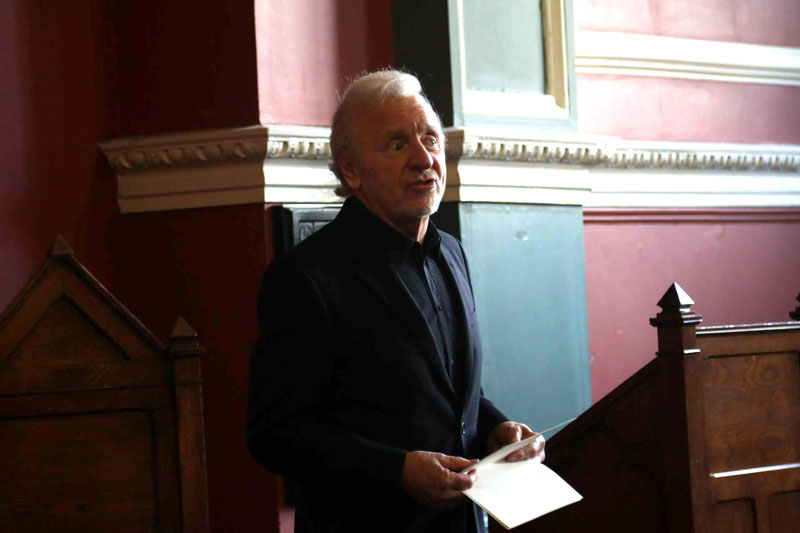 Any fan of world-renowned musical Les Misérables will be familiar both with the leading figure, Jean Valjean, and with the gravitas brought to its origination by Irish tenor Colm Wilkinson. The seriousness of this most famous character, however, was at odds with the affability of the man who addressed the University Philosophical Society (the Phil) and Trinity Musical Theatre (TMT). Introduced as “musical theatre royalty”, Wilkinson was visibly honoured to receive the Gold Medal of Honorary Patronage from the Phil and to become a patron of TMT.

There were no airs and graces from the grandfather of musical theatre who, in addition to originating the role of Valjean, has achieved iconic status in the title role of Phantom of the Opera. Indeed, reprising these roles alongside much younger actors in anniversary productions was, Wilkinson admitted, a difficulty for him now he has reached his seventies. His achievement, however, cannot be understated. As well as appearing as the Bishop in the 2012 movie version of Les Misérables, he has performed in the stage musical over 1,200 times, Phantom at least 1,700 times, and Jesus Christ Superstar a similar number.

Surprisingly soft-spoken for such a dominant man of the stage, Wilkinson offered a “quick tips kind of vibe” to anyone wishing to pursue a career in the arts. His advice to those looking to work in performing arts was simple. “Keep yourself clean”, he told students. “If your body doesn’t work, you don’t work.” Getting to the point in all questions put to him, Wilkinson was sometimes brutally honest about the reality of the musical theatre business, addressing both its increased commercialisation and the difficulties of missing out on family life.

Perhaps most prescient to a student audience was his repeated advice to “stop partying! No alcohol, no drugs. Keep yourself clean”. Physical fitness and practicality were clearly the most important constituents of Wilkinson’s career, as he advised hopefuls to remember, above all, that dramatic arts is a business. Marketing yourself, managing contracts and networking may not go with the artistic image, he admitted, but are crucial constituents of any career.

It wasn’t all serious, however, as he also discussed his childhood in Drimnagh as one of 10 children, the influence of a musical household, and his personal anecdotes of the stage. For any musical theatre buff, to hear one of its icons casually discuss performing its most influential numbers was an awe-inspiring experience. From receiving “Bring Him Home” only a week before he was due to originate it in the first run of Les Mis, to calling the iconic Phantom number “The Mucus of the Night”, it was clear that Wilkinson, though taking his work extremely seriously, had thoroughly enjoyed his long career in a field which he loves.

Three hours rehearsal, he claimed, felt like 10 minutes, such was the love and passion he brought to his work. Musical theatre aficionados were vindicated by his less-than-impressed reaction to Les Misérables, citing an admiration for Hugh Jackman but a belief that other singers and actors could have done a much better job of adapting the musical. His good humour, however, had students laughing through his digs at Russell Crowe, poking self-conscious fun at the idea that he should be an inspirational speaker and putting performing career down to a love of “getting out and showing off”.

Amid all of this, Wilkinson paid touching tribute to his family and the support he has received over the years. In keeping with his advice to “keep quiet” and nurture the voice, Wilkinson decided himself when the conversation would end, leaving students on with a final thought: “Creating something and feeling like you’ve done a good job”, he said, is the most gratifying feeling of them all.