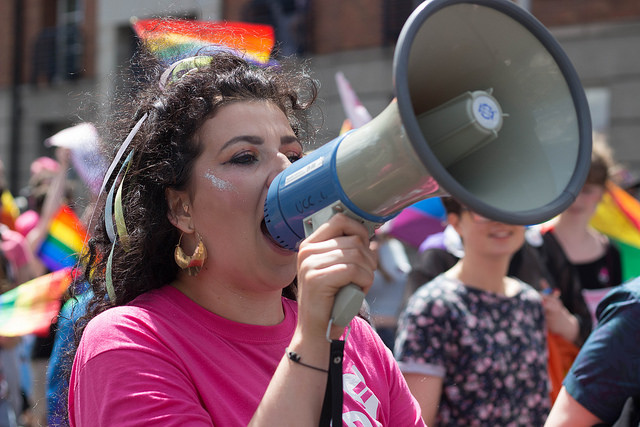 To be from Northern Ireland, to many in the six counties, is often to feel forgotten. This is not meant in the usual context of historical grievances – or even the constitutional politics that shape the discourse of the region – but more importantly today in relation to issues surrounding social rights. People in Northern Ireland have in recent years watched on as their counterparts across these islands have surpassed them along the spectrum of social progress.

Last month’s open letter demanding the introduction of same-sex marriage in Northern Ireland – signed by, among others, Shakira Martin, the President of the National Union of Students (NUS) – was a welcome acknowledgement of this disparity in progression of rights-based issues between the North and the rest of the UK and Ireland. It was a sign of solidarity, if an unfortunately rare one, with a region too often forgotten about in an increasingly Anglo-centric United Kingdom.

It is nothing new, however, to remark on Northern Ireland’s complicated relationship with socio-political issues. It’s bordering on cliche by now to note how Ireland’s social landscape as a whole has evolved dramatically in the last generation or so. With religion playing such a pivotal role in the island’s colonial past, its influence remained visible in Irish society long after it had faded to the background of life in neighbouring countries.

However, the old image of the socially conservative South compared to the more outward-looking North has been very much turned on its head in recent years. Following referendums in 2015 and 2018 in the Republic, Northern Ireland is now the only part of these islands where same-sex marriage and women’s reproductive rights have not been legislated for.

It was in this context that last month’s open letter to the British government proposed that given the lack of devolved government at Stormont – and the “overwhelming support” of the public in the North – Westminster now has a responsibility to intervene and legislate for same-sex marriage in Northern Ireland.

“The UK Government is rightly proud of its record in promoting LGBT+ rights around the world”, the letter states. “Yet here in the UK, LGBT+ people are experiencing blatant discrimination on its watch.”

The reference to “here in the UK” is a more pointed linguistic device than would initially appear, the use of which is quite revealing. Designed to highlight the absurdity of such a disparity in rights provisions in different parts of the same state, it in fact evokes a harsh reality: Northern Ireland is rarely considered by the UK as actually being part of it.

One of the unique constitutional features of the UK is that it’s comprised of four culturally and politically distinct regions under the banner of one state, where fundamental values coexist alongside a degree of independence for each region and respect for their diversity. There is undeniable merit to this notion in theory. It is difficult, however, to conceive of any values more fundamental than the basic human rights being denied to this day in Northern Ireland. The refusal to recognise a same-sex couple’s right to marry isn’t a mere regional quirk that culturally distinguishes Northern Ireland from the rest of the United Kingdom.

In fact, the lack of progress on this issue is in spite of the general consensus in its favour. As noted in the letter, polling consistently displays a strong majority of people in Northern Ireland who support the legalisation of same-sex marriage. At least 55 of Stormont’s 90 representatives are in favour of change – legislation for the legalisation of same-sex marriage was passed by the Assembly in November 2015, only to be blocked by the Democratic Unionist Party (DUP)’s use of the petition of concern mechanism, designed to prevent the passage of legislation that does not have sufficient cross-community support.

It seems obvious that reform of the petition of concern – used erroneously here to block legislation that has no bearing on cross-community matters – would solve this issue and allow equal marriage legislation to be introduced at Stormont. Cross-party talks around the restoration of Northern Ireland’s institutions of government, however, having stalled last year after a draft deal was abandoned by the DUP at the eleventh hour, look unlikely to bear fruit anytime soon.

Since the 2017 general election that resulted in the DUP holding the balance of power in Westminster, and, under the influence of the fervent British nationalism that has reared its head since the Brexit referendum in 2016, we have – for the first time since the Good Friday Agreement’s guarantee of London’s “rigorous impartiality” – an openly unionist British government. Under threat of losing support over elements of her withdrawal agreement, Theresa May’s references to the “precious Union” and assurances that there can be no divergence between Northern Ireland and the rest of the United Kingdom have sought to placate a perennially insecure DUP as it leads the charge of a British nationalist bandwagon in the form of Brexit.

However, the open letter to Theresa May’s government last month highlights the level of hypocrisy at play here. There is already significant divergence between Northern Ireland and Great Britain – not only constitutionally speaking in the context of the Good Friday Agreement, but on fundamental rights issues such as marriage equality.

An engaged government would be doing its utmost to re-establish the institutions in Northern Ireland: a principled one would recognise that, with the current political vacuum, it has a responsibility to legislate for the recognition and protection of the rights of all of its citizens in line with the professed fundamental values of the state.

Until Westminster heeds the demands outlined in last month’s letter, it will remain clear that talk of a “precious Union” in reality amounts to little more than an empty platitude.