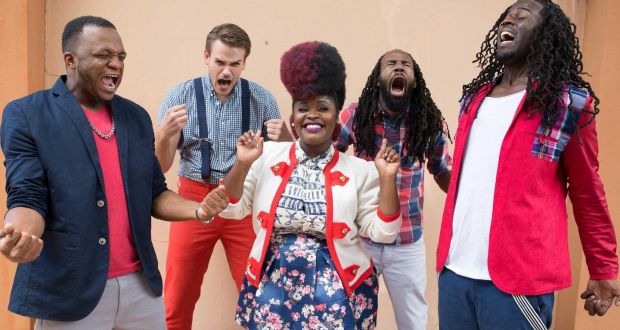 A perfect blend of execution and emotion is rarely found in any live performance. Bands such as Snarky Puppy are often criticised for being too robotic, lifeless in their virtuosity, and artists like Car Seat Headrest are labelled whiny and vocally sloppy.

Both acts have amassed a cult following for these very reasons, for their mechanical wonders or their sensitive moans, both of which I can appreciate, but on Saturday night it was revealed to me in a flash of dazzling light and soul that an outfit can balance the two without sacrificing a sliver of skill or sincerity. Tank and the Bangas opened my eyes.

Originally a slam poet, Tarriona “Tank” Ball floats onto the stage of The Sugar Club draped in all of the colours of the rainbow and oozing drama of every kind, all expressed via a mere twitch of her lips. She stands atop the crowd, a prophet possessed, jolting left and right as every beat and rhythm runs through her like lightning.

Every moment of climax is represented visually, Tank’s electricity spreading to the audience and shaking them of any inhibitions. Every witness is in the palm of her hand, entranced and silent, then rowdy and ecstatic. Tank’s supple alto is carried on the shoulders of glistening vibraphone synths, pinpoint harmonies and criss-cross countermelodies as well as delicate flute lines, until she lets loose volumes of bars over jaw-dropping bass runs.

While Tank bares her soul the Bangas prop it up upon a pedestal of unified brilliance. They move as one, all eight of them, and their collective energy is infectious. Though their tightness and clear perfectionism cannot be denied, Tank and co clearly don’t take themselves too seriously. Many of her lyrics revolve around the mundane but with an injection of soul, and at times comedy.

“I think it’s funny you want an extra dog in the house when you don’t even clean up your own shit”, she quips, the audience becoming a sea of hysteria, but never for too long. Tank’s lyrical focuses of empowerment, love and fairness take us on a cathartic rollercoaster – “Change your situation!” she booms – and I look down at my notes to see that I’ve written: “I’m quitting my job and moving to New Orleans.” (My notes also claim that the bassist should be arrested.)

After an explosive finish, which has the band moving as if they’re in Stop Making Sense and sees the room turned into a house party, the band return to the stage for what is presumably an encore. Instead, Tank introduces her colleagues, and after effortlessly quelling the rowdy crowd, whispers the title of their upcoming album, Green Balloon. She says we are the first people to be told, and after a performance as powerful as this one that really meant something, as if we were part of it.

After a brief but beautiful a cappella coda, the band stroll off stage, waving as if to friends, and the audience are left with a sense of finality and resolve that no encore could match.