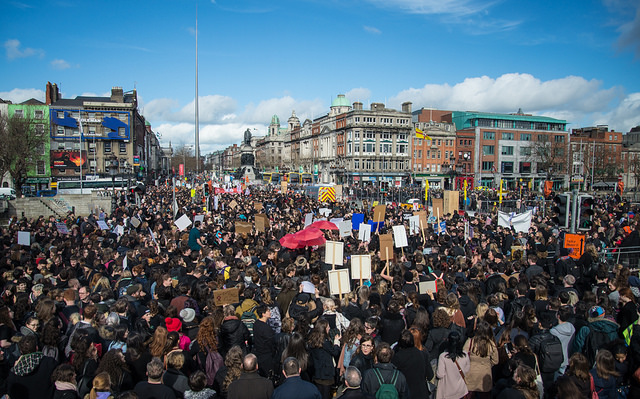 Compared with last year, Trinity College Dublin Students’ Union (TCDSU) Women’s Week has a decidedly different feel to it. While in the past you might have expected events like banner-making for repeal and women for election workshops, many of the causes we once turned to have seemingly flown off the radar.

This isn’t without good cause. Mere months ago we voted to repeal the eighth and acknowledge a woman’s right to bodily autonomy for the first time in the history of the state. A few weeks ago, students voted for five female TCDSU sabbatical officers – a massive change from recent years in which men dominated the union’s lineup.

Trinity students would be right to think that we have made massive leaps forward in the last year in how women are viewed both within both the College and society. Our work, though, is far from done.

Launching the Trinity Women’s Review on Monday night, Senator Ivana Bacik urged those gathered to look at the cautionary tale that women’s involvement in Irish politics has woven through our history books. In 1919, when elected the first female cabinet member of Dáil Éireann, Constance Markievicz probably believed she had made headway in creating an equal and just society. Despite the fact that women received the vote in 1922, however, it would be nearly another 60 years before another woman held a similar position in Irish politics.

While you could argue that we live in a very different time to the unstable and rebellious Ireland that Markievicz lived in, our statistics for women in politics are not that different. Since she took her seat in 1922, there have been 4,575 other seats available across 30 elections. Women have secured just 274 of these. Hers was a country where getting one woman elected was a marvel. Ours is one where getting over a couple of dozen is.

We need to remember that when we run workshops like women for election, we are doing so to encourage women not only to run in students’ union elections but to run for government in later years

Powerful actions like electing an all-female sabbatical team and repealing the eighth are strong statements of intent but they do not get us across the line. The years of campaigning up to this moment are lost if we sit back and see our work as done. In the last few weeks, I have been criticised to the point of being chastised for pointing this out. Apparently, it is time to rest on our laurels and be happy that we have made this progress.

If anyone takes my warning as unhappiness at recent results, then they are not listening to what I am saying. These events made me ecstatic and filled me with hope for the future that myself and other women might enjoy. Our environment in Trinity, however, is a very small – quite liberal – bubble. We need to remember that when we run workshops like women for election, we are doing so to encourage women not only to run in students’ union elections but to run for government in later years. When we teach and encourage activism, we are giving women the tools to protest the countless other injustices they will face later down the line.

None of this is to say that the events being covered this week aren’t incredibly important. They are. The focus on period poverty is commendable and is an issue that we have ignored for far too long. In the UK last week it was reported that over 137,000 girls missed out on school in the last year because they couldn’t afford sanitary items. Discounted mooncups and stands where you can donate sanitary items to people who really need them are key steps towards a more equal society.

Whether it is by providing physical items like sanitary pads and tampons, or by running workshops that equip people with the skills they need to invoke change, we need to acknowledge that the equal treatment of women is a developing issue, not a solved one. If we give our women and girls the tools they need to succeed, there will be less cause to take to the streets to demand change. As we solve the problems in our close environment, we need to remember that there are many others waiting for us beyond our campus.

So, on this annual week of celebrating women’s contribution to society, bask in the glow of what we have achieved. Use the fire it lit in you to power your way through new causes. Most of all, keep the flag of feminism flying high – it won’t be long before something tries to threaten it once more.