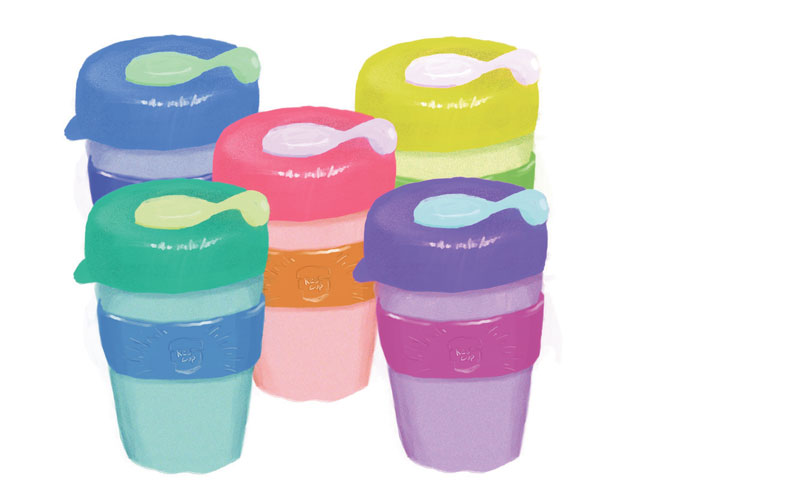 Standing in the Arts Block, I spot a girl rooting frantically through her bags for something. A crestfallen look suddenly appears on her face when she proclaims to her encircled entourage: “Oh shit, I’ve forgotten my KeepCup. Guess that means no coffee for me!” They all nod dutifully, unanimous in their agreement.

Trinity’s fashion scene has embraced a range of “woke” issues over the last few years, from the invasion of Repeal jumpers to End Direct Provision laptop stickers. The latest must-have accessory fulfils every desire for something fashionable, functional and feel-good. From the grand efforts such as the campaign to divest from fossil fuels to the addition of coffee cup sections in the bins, Trinity is turning green. There is no more tangible sign of the sustainability trend than a brightly coloured KeepCup spotted in the hand of any self-respecting student. Considering the caffeine dependency of the College population and the general favour towards all things eco-friendly, the popularity of KeepCups on campus should come as no real surprise.

The KeepCup was born in the coffee-loving land of Australia 12 years ago. Coffee shop owner Abigail Forsyth and her brother Jamie Forsyth became visibly aware of the mountain of single-use plastic being produced by the coffee industry and decided to do something to combat this. It took until 2018, though, for the entry of the word “single-use” into the Collins English dictionary, proving how ahead of the curve the Forsyth siblings really were.

Unlike the Italians, who enshrine the espresso and refuse to ever caffeinate on the go, Irish people like their caffeine hit quick and mobile. With one in three Irish people purchasing at least one coffee a day, the slew of cups liable for the landfill reaches epic proportions. Few consumers think of the life cycle of their disposable cup once it has been carelessly tossed in the bin. Though not bearing the apparent evil of the plastic straw, disposable coffee cups prove an equal scourge upon the environment. Sneakily hidden within their innocent cardboard shell is a nasty little polythene liner, which is an absolute pain to remove.

In an ideal world, all KeepCup owners were inspired to invest in the glassware due to an awareness of these important environmental benefits. An instant identifier of conscious consumption, the KeepCup sends out a flashing signal to all onlookers. “Yes, I’m environmentally friendly, yes I eschew single-use plastic at all costs, and yes my KeepCup matches perfectly to my recycled bamboo laptop case.” Endorsed by glossy high-fashion bibles such as Elle and the esteemed lifestyle section of the Guardian, the success of the KeepCup has all the hallmarks of the somewhat odious Instagram trend.

The link forged between the glassware and the third-wave coffee movement has only helped to copperfasten its status as a signifier of “conscious cool”. Hipster coffee shops around Dublin have gotten in on the action, selling their own branded versions and offering discounts for those who use them.

From laptop stickers to tote bags, the population of Trinity simply love a non-committal badge of identity. Perhaps less overt than the iconic Repeal jumper, the KeepCup is a subtle and practical nod towards sustainability. Even College itself, with its violent desire to monetise the Trinity brand, has stepped up to the plate with its own line of KeepCups. Whether the comments of the Arts Block’s self-appointed “sustainability police” fill you with a sense of dread or admiration, however, nobody can deny that KeepCups are hands down the best way of sneaking coffee into the library.