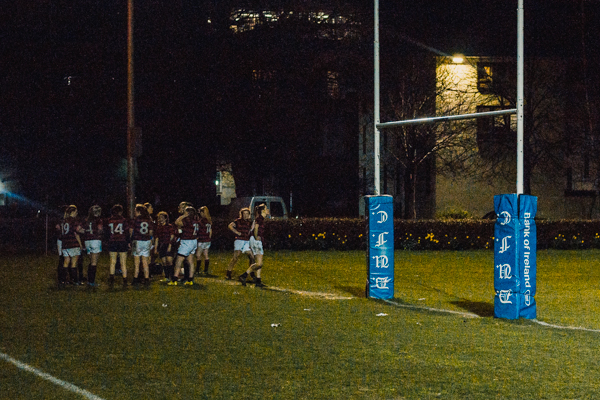 A few weeks ago, Dublin University Football Club (DUFC) Women left Naas looking dejected after being edged out by MU Barnhall in the final of Leinster Division 3. Yesterday in College Park they got their revenge, beating Barnhall 22-15 in the semi-final of the Paul Cusack Cup to qualify for a second final in two months.

It’s hard to overstate the significance of the achievement for DUFC. Time and again this season they have shown a consistent improvement, an ability to bounce back from defeat and return as victors, and from the kick-off yesterday afternoon it was all Trinity. Undoubtedly still buzzing after their 69-0 win over CYM Rugby Club in the quarter-final, they pressed hard for a try early on. But Barnhall matched them for intensity and took the lead against the run of play when scrum-half Orlaith Graham crashed over in the corner for an unconverted try.

If it seemed this first blood would open the game, then neither side managed to make it happen, and most of the action took place in the middle of the park. In a war of attrition, it was clear that something had to give, and Trinity blinked first.

Barnhall winger Amy Cunningham was the one to deliver the blow to the hosts’ rearguard, powering her way through the narrowest of gaps in the Trinity defence. Barnhall knocked on inches from the line, and it looked like the danger had passed when Honor MacNamara’s clearing kick caught full-back Lai Elliot Brannigan unawares. But Brannigan recovered her composure and set in train a passing move that ended when flanker Bianca Paun finished off in style. A missed conversion meant Trinity went in at half-time 10 points down.

If it looked like Trinity were cowed, however, then they showed from the outset of the second half that the game was far from decided. Immediately after the break they attacked, with an incisive MacNamara kick bringing them into Barnhall territory. Potent running from Claudia Alonson, Siofra McGuinness and Aoise Tormey Murphy put pressure on the Barnhall try-line, but the away side just about held out.

The momentum, though, had by now palpably swung and DUFC camped out in the Barnhall 22, searching for cracks in the visitors’ defence. The 10-point deficit had seemed ominous at half-time but as Barnhall clung on for dear life, a Trinity comeback looked increasingly on the cards.

With 20 minutes remaining, the fightback bore fruit. Second-row Martha Dwyer began the move with a show of stunning footwork, skipping clear of the Barnhall defence. Inches from the whitewash, Dwyer was hauled down, but DUFC stayed poised and patient and when the right moment came Niamh O’Kelly Lynch was ready to touch down with minimal fuss. MacNamara missed the conversion but Trinity were firmly back in contention.

Almost immediately from the kick-off, Trinity were back on the attack, the wind now very much in their sails. A line break from Áine Castles – who was deadly with ball in hand throughout – moved play again into the 22. The visitors lost their discipline as Trinity piled on the pressure, conceding a string of penalties. Eventually Molly Boyne seized the initiative and drove over the line, and MacNamara nailed the conversion to put Trinity in front.

Minutes later MacNamara added another three points to her tally and to Trinity’s advantage, sticking over a penalty in front of the posts to leave Barnhall reeling. In the space of 10 minutes, the visitors had thrown away a 10-point lead, and with a spot in the Paul Cusack Cup final on the line, they went back on the offensive.

Barnhall were now chasing the game, though, and gaps began to appear in their defence as they threw everything at DUFC. Inevitably, it was O’Kelly Lynch with the speed of thought and of foot to exploit the open space left in behind. She pounced on a spilled pass, and sprinted the length of the pitch to touch down under the Barnhall posts. MacNamara slotted the kick, and DUFC were home and dry.

To Barnhall’s credit, they kept fighting until the end and managed to secure a consolation try at the death, with Paun going over under the Trinity posts. Orfhlaith Murray’s missed conversion was the game’s last action, and DUFC looked delighted. For the second time this season they have qualified for a final – a stunning achievement for a side who have made enormous progress this season. On April 27th they will take on Port Dara Falcons and bid for glory.