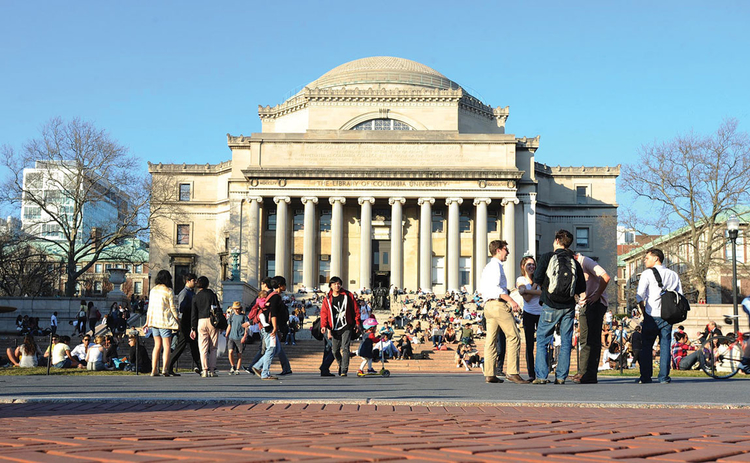 Ours is an age when universities all over the world are becoming increasingly committed to ambitious educational endeavours. This new outlook has been adopted to a great extent in Trinity, where the transformative – if controversial – Trinity Education Project has been one of the biggest talking points among students this year. The College’s dual-degree partnership programme with Columbia University is another example of this fresh approach. Jessica Sarles-Dinsink, the Associate Dean of International Programmes and Special Projects at Columbia’s School of General Studies, sums up the programme’s aim as follows: “An education that allows you to grow out into the world and be public intellectuals, be thinkers in the world, be interpreters of the world.” Speaking to The University Times, she calls it “a wonderful experience”.

However, creating a programme of this magnitude is not a simple undertaking. Balázs Apor, an associate professor in Trinity’s School of Russian, is in charge of overseeing a pilot of the programme that sees four third years in Trinity’s European studies course currently studying in Columbia. Speaking to The University Times, Apor is candid about the course’s “initial complications”. He says there is a lot of work to be done on the details of the project: “It’s been very, very busy. There’s a lot of moving parts still but we’re getting there.”

On the broad strokes of the programme, though, there is little disagreement: most say that it’s bold, ambitious and exciting. A dual bachelor of arts, it took in its first set of students this year, but its journey began in August 2018. Then, Prof David Madigan, a Trinity graduate and formerly the Executive Vice-President for Arts and Sciences at Columbia, attempted to create a programme that would allow students to split a degree between Trinity and Columbia and receive degrees from both. Madigan sought to emulate the success of Columbia’s existing partnership with the Paris Institute for Political Studies (Sciences Po) and forge links between the two colleges.

In European Studies, students have long had a wide range of opportunities to study abroad but we were always trying to see how to develop and expand the options available

Dr Graeme Murdock, an associate professor in Trinity’s School of History, worked alongside Trinity’s Global Relations office to implement the programme. Speaking to The University Times, Murdock says that “in European Studies, students have long had a wide range of opportunities to study abroad but we were always trying to see how to develop and expand the options available. So, these discussions for a new initiative with Columbia were a natural extension of what we were trying to achieve in the degree at that time”.

“Columbia University is a first-rate institution with considerable experience of developing successful international degree programmes, so they were ideal partners in many ways”, adds Murdock.

Invariably, the question of fees hangs in the air. Irish students will be expected to pay regular student contributions while in Trinity (up to €3,000 a year), and US fees while in Columbia (about $50,000 a year). Financial support is available from Columbia for students, but on a case-by-case-basis. Apor is clearly aware of its elitist nature, and is direct: “We’re not talking about huge student numbers. Of course, it has to with resources and capacity, but there is certainly the potential to grow.”

Apor recalls his trepidation when his students first ventured out into the wilderness of New York’s concrete jungle, but according to Sara McGeough, a third-year European studies student and one of the “pioneers” of the programme, he needn’t have worried. Speaking to The University Times, McGeough says Columbia is a “big change from Trinity. The student body here is unbelievably diverse: there are people from all over the world, all with such different backgrounds so that being ‘international’ is pretty much the norm”. Despite the “high-pressure environment” in Columbia, where students grapple for top grades and internships, McGeough says the “cultural fluency” of the course is something she is particularly enjoying. This, you suspect, would be music to the ears of Apor and the programme’s other organisers.

First-year European studies student Christian Rodriguez is one of the 37 Columbia students spending his first two years in Trinity. He also sees a contrast between the colleges, academically and culturally. Speaking to The University Times, however, Rodriguez says the fees are a key aspect of the course. For many Irish students, the US fees will probably prove prohibitive, but for Rodriguez and his US compatriots, it can be “the most affordable option for college. Because Trinity’s fees aren’t stratospheric like those in the US, and because Columbia was able to generously meet all of my financial needs”.

The student body here is unbelievably diverse: there are people from all over the world, all with such different backgrounds so that being ‘international’ is pretty much the norm

Columbia’s main selling point, he says, is the opportunities it offers for studying a wide range of subjects, ranging from classical literature to the sciences, in addition to a chosen major. McGeough describes this aspect of the course as “really rewarding”.

Orla Frénoy, a first-year European studies student, is palpably enthusiastic about the “insane opportunity” that the course offers. Frénoy will receive financial aid from Columbia in order to take advantage of the course.

The dual degree, then, represents overall a course that hopes to open students up to a new world and give them a rounded experience of college life in two very different universities. And although it is still in its infancy, half the thrill is in the discovery. Indeed, Frénoy seems to speak for the current crop of first years when she says that it is “interesting being the very first ones to do the programme, all just discovering it together”.