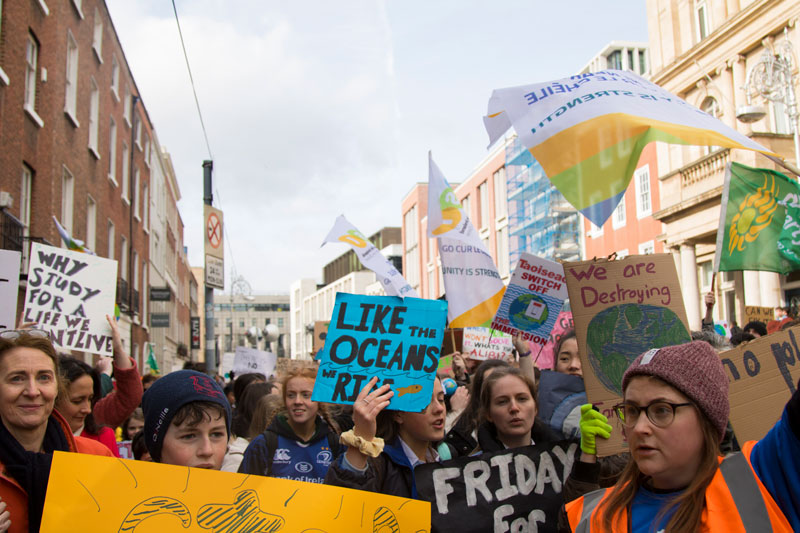 Last month, children joined thousands in Dublin for a huge protest about the calamity of climate change.
Ben Morrison for The University Times

The climate emergency begets extraordinary levels of population-wide denial. Because of the scale of the crisis – signalling as it does a potential collapse of civilisation – we’ve become experts at burying our heads in the sand. Never is this the case more so than when it comes to our imaginary future children.

The activist rhetoric of “protecting future generations” has been worn out, yet it hasn’t quite entered everyday conversation on a micro-level. We still talk flippantly about our own individual futures, which invariably contain plush houses, thriving careers and 2.4 children, taking for granted that such things will come as easily to us as they might have for past generations.

It’s a grim reality to face, but the lives that stretch out in front of us are likely to differ from our parents’ in more ways than solar panels and electric cars. Whether we should become the parents of another generation is becoming a profound – and urgent – issue that we can’t ignore any longer.

The question isn’t exactly new: antinatalism, a philosophical movement that advocates for sparing other human beings the inevitable pain and suffering of life, precedes environmental concerns. For antinatalists, being brought into the world without consent isn’t worth it, period – climate cave-in or not. Needless to say, however, the philosophy has gained more and more traction in recent years.

Less radical groups have also begun to spring up, including the UK-based Birthstrike. Birthstrikers’ approach is non-judgemental towards parents, but they have opted out of parenthood themselves, largely in protest against government inaction towards an imminent mass-extinction event. “Insecurity of future, despair at our species’ relationship to our habitat and each other, channelling time into activism and rebellion, are all common motivations”, reads the Birthstrike website.

It’s a grim reality to face, but the lives that stretch out in front of us are likely to differ from our parents’ in more ways than solar panels and electric cars

In addition to these groups, a general mentality is beginning to enter the mainstream that says that having children is irresponsible given the toll they exert on a floundering environment and the bleak outlook for the future of our planet.

Sure, we don’t know exactly how the future will look. It is, by nature, impossible to predict. But we can make some pretty educated guesses about the troubling times that lie ahead, based on blazing Californian wildfires, thawing ice caps, and even Ireland’s own bipolar weather.

Studies have already shown that not having children – particularly for people in rich countries, who tend to lead the most environmentally unkind lifestyles – is one of the best ways we can cut our carbon footprint. Choices like eating less meat, or choosing not to fly, pale by comparison.

Some argue that calling a moratorium on having children isn’t the answer to the crisis: that instead we should be focusing on effecting mass, systemic change (though of course, it’s possible to do both). But on an individual level, do we really want to welcome our children onto a crumbling planet?

People can also argue, like the antinatalists do, that the problem is timeless. Having children is, and has always been, an ethically fraught decision: bringing another person into the world who is totally dependent on you is inherently questionable. Parenting has never been easy, and despite their best intentions, parents inevitably make grave mistakes throughout the course of a child’s life. Has anything really changed?

On an individual level, do we really want to welcome our children onto a crumbling planet?

But our attitudes to having children have indeed evolved, and quite quickly too. It’s now accepted that having children is a huge responsibility, and one that should be considered carefully. We wait longer to start families and have fewer children, because we believe that the ones we do have deserve some level of security, and parents with the capacity to protect them. But that’s no longer something our generation can reasonably expect to be able to provide.

“You say you love your children above all else and yet you are stealing their future in front of their very eyes”, said 16-year-old climate activist Greta Thunberg at a UN climate change conference last year. The line was perhaps the most brutal of her inconveniently truthful speech. Her words exposed as deceitful a value at the bedrock of our modern, civilised society: that children come first.

But it’s time to face the reality: parenting is much more of a self-interested endeavour than we let on. And it’s this same self-interest that has gotten us into this climate mess. Do we really want to continue the trend, and burden our beloved children with the fallout?