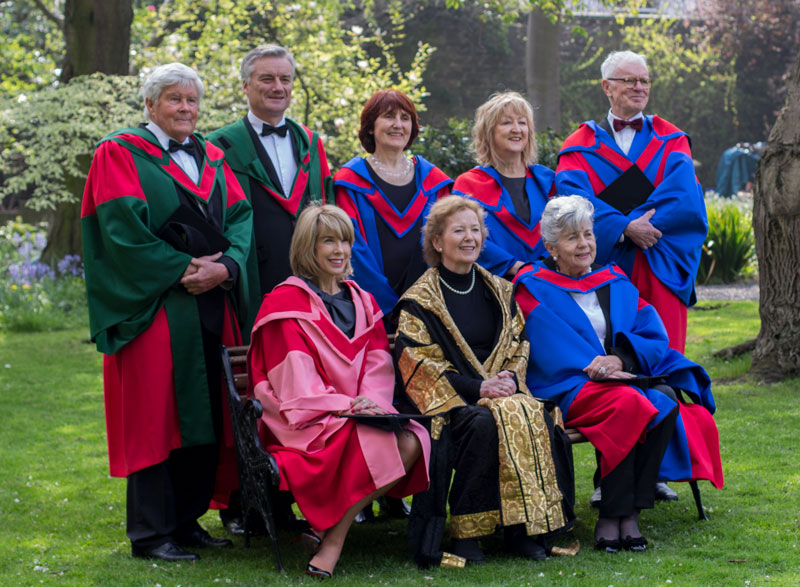 Wildlife expert and writer David Cabot and architects Yvonne Farrell and Shelley McNamara were also awarded honorary degrees this afternoon in what was the final honorary degree ceremony for Chancellor Mary Robinson, whose term in the role is drawing to a close.

O’Brien, a Trinity law graduate, is Ireand’s current Ambassador to France, having previously served as Under Secretary General and Legal Counsel to the UN. In this role, she advised on any legal issues facing the Secretary General and the UN Secretariat. O’Brien was today conferred with a Doctor in Laws.

Speaking at the degree ceremony, the Public Orator, Anna Chahoud, said: “In the midst of the worst crises of the twenty-first century, she has been confronted with painfully frustrating cases, but never lost her faith in the power of the law.”

Naughton is a prominent patron of Irish art and architecture, having formerly served as Chair of the Board of the National Gallery of Ireland. Naughton, who was today awarded a Doctor in Letters, oversaw the construction of the new, widely lauded millennial wing of the gallery. She was also heavily involved in the publication of the first-ever comprehensive reference text on Irish art, Art and Architecture of Ireland, which was co-ordinated by the Royal Irish Academy. Chahoud said of Naughton today: “A profound expertise has informed her artistic passion and directed her munificent enthusiasm to the benefit of the community.” 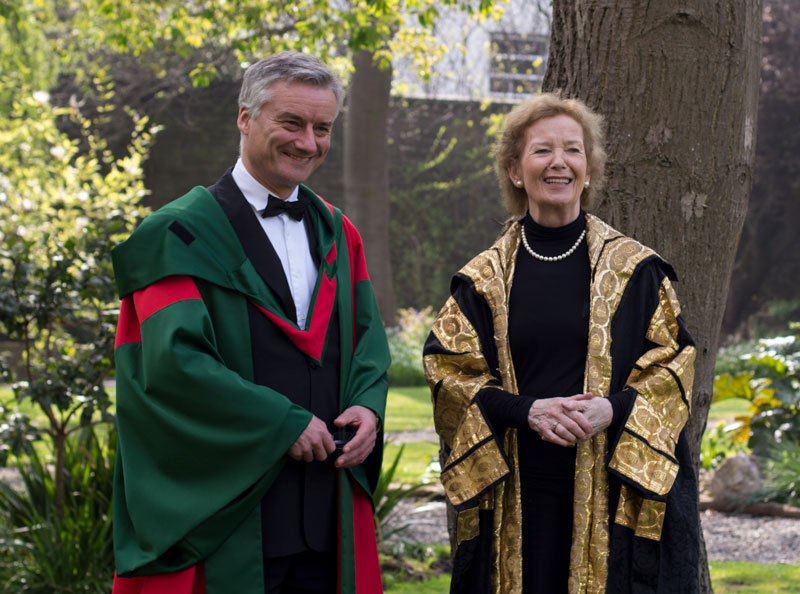 Ó Gráda is an esteemed economic historian, best known for his work in interpreting the Irish Famine. Among many publications, Black ’47 and Beyond and Famine: A short history, are the most internationally acclaimed. Ó Gráda, who was awarded a Doctor in Letters, is an emeritus professor of economics in UCD and was recently elected the first Irish-based president of the Economic History Association. Chahoud commended his work on the Famine: “Each famine is unique, he has discovered, but factors leading to famine are common: war, plague, natural disaster, and – listen carefully –lack of compassion.”

Cabot was conferred with a Doctor in Science today for devoting his life to the study of Ireland’s flora and fauna. Chahoud described Cabot as a “distinguished natural scientist, acclaimed writer and film-maker, Irish and European environmental advisor, and, first and foremost, irresistible ornithologist. Of the winged creatures he loves ‘the mystery, the enigma, the distance. Cabot is a Trinity zoology graduate and has written numerous books on wildlife, most notably in the Collins Natural History series and his new work The Burren.

Co-founders of Grafton Architects Farrell and McNamara have been lauded for their architecture. In 2018, they were appointed the sole curators of the Architectural Biennale in Venice. At the World Architecture Festival, their work in the Luigi Bocconi University in Milan was voted World Building of the Year. The duo’s first university building was Trinity’s Parson’s Building, which houses engineering labs. Chahoud said of Farrell and McNamara, who were each conferred with a Doctor in Letters: “Their creations are imposing but never aggressive, because they are born from a deep evaluation of the surrounding context. Whether you drive under the motorway bridges in Bray and Balbriggan, or marvel at the Lima New University Campus rising on the summit of ocean cliffs, you would believe that nature built them there.”