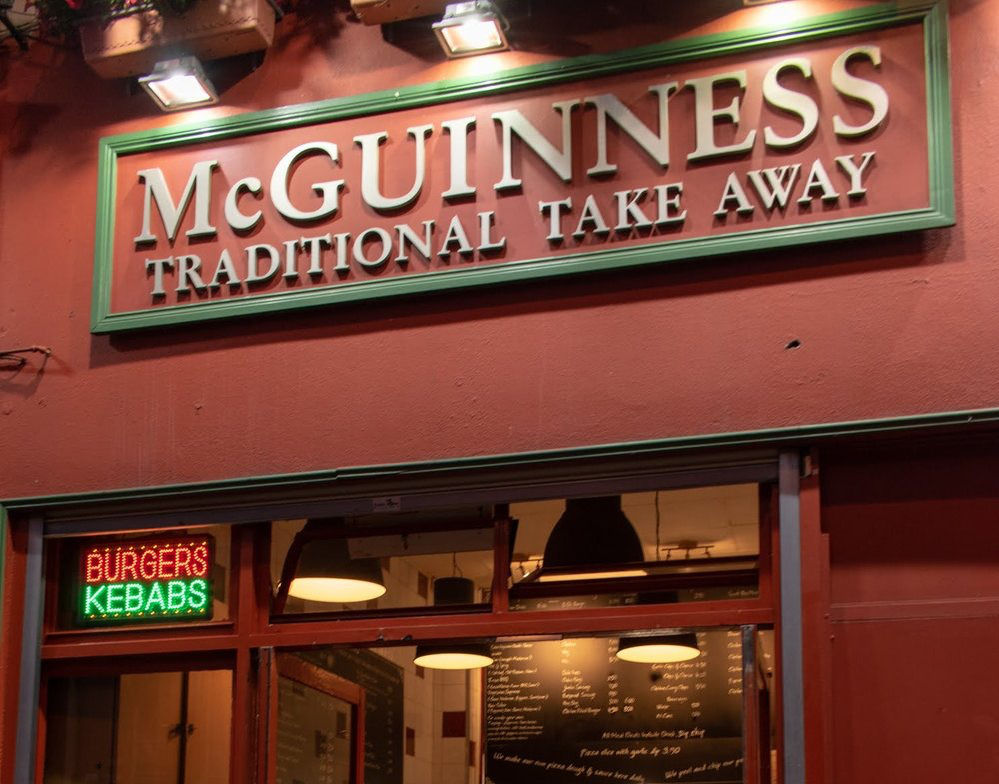 McGuinness’s of Camden St is an independent late-night takeaway with a remarkably human backbone and an intensely progressive viewpoint. The tiny shop with four stools chained to the floor has grown from “just another chipper” to having the most extensive vegan menu in its field.

Speaking to its co-owner Theresa McGuinness, a self-proclaimed “imperfect vegan”, it’s easy to see how this minute shop transformed into one of Dublin’s most-treasured spots.

McGuinness and her husband Tom met 18 years ago, around the same time that her husband had opened a “regular chipper in a great location”. After falling in love, McGuiness quit her job at an American investment bank and moved here to work for a software company. Being a half-Italian New York native, she brought a pizza recipe with her that her husband implemented into his new takeaway, something different to the cod and chips at every other stop on the street. Their low prices helped not only to garner a loyal customer base but to survive the recession. It wasn’t long before McGuiness got bored with her job here and decided to quit to help out run the chipper instead. At this point the business was using lard for frying, meaning that nothing outside of the drinks fridge was vegan.

Despite watching the animal rights documentary Earthlings early on, she found it nothing more than interesting and continued to be a carnivore until 2015 when she stumbled across a 10 minute speech by activist Philip Wollen. Instantly, McGuiness’s thinking shifted. She felt like a “hypocrite” for running a business that revolved around animal products. Not only did this change inspire her to take on cooking for the first time, she was also inspired to create her own plant-based recipes with the goal of introducing them to the McGuinness menu. Tired of asking for allergen lists and ingredients at restaurants, her sights were set on creating a “massive and inexpensive menu for vegans”.

Though it took over a year of formulating and testing before rolling out the ethical options, McGuinness made small changes to the business immediately. Lard from the fryers was replaced with vegetable oil, frozen bread was dumped in favour of fresh, and fish was thrown off the menu entirely – a first for Irish chippers. The initial wave of vegan options included battered sausages, homemade chickpea or black bean burgers, and some slightly adjusted pizza slices. Vegans arrived in their droves, finally getting to properly indulge in some greasy grub without having to take out a loan. “I was sure that chippers all over would adopt a vegan menu”, said McGuinness, but surprisingly nowhere else in the city has even come close.

The demand for vegan junk food grew and grew, as did McGuiness’ recipe book. Using wheat meat – also known as seitan – she replicated one of her favourite American sandwiches: the Philly Cheesesteak. It’s nearly impossible to find a non-vegan one here in Ireland, so the interest and overall quality quickly made this the most popular choice on the menu. Even the loyal non-vegan customers began ordering them, viewing it as a “healthier option”. Though health is important, it’s clear that the primary focus is on ethics. McGuiness sources organic and fair-trade ingredients for nearly everything on her menu, drastically reducing profit margins – but she doesn’t care.

It is interesting then that, despite McGuinness being a vocal animal rights activist, she calls herself an “imperfect vegan”. While the late night takeaway has reshaped Dublin’s vegan landscape and McGuiness only controls this side of the business, she is still very aware of the thousands of meat-eaters she feeds each year. She fears that becoming a fully vegan restaurant would not only be unsustainable right now, but would drive away potential vegans.

Throughout the interview, she repeats the phrase: “What you fight comes back stronger.” It would seem that she feels by getting meat-eaters in but giving them the choice of a vegan menu, “the demand will grow and the menu will adjust accordingly”.

Although the majority of late-night customers tend to be drunken meat-eaters, “the customers from opening time until about 10pm are predominantly vegan”. She jokes that this is because “vegans like to take care of themselves”. She also admits that the shop manager was initially sceptical of the new menu, but after seeing the amount of joy and appreciation it brings in daily, he is proud of it. The staff are all vegetarians studying for their masters or PhDs, including one member who is doing a masters in sustainability. They are all educated and aware of the message that they are spreading, which only gives more credence to the business.

McGuiness “absolutely” sees a fully vegan future for McGuinnesses. Her optimism is bolstered by the fact that multiple families drove across the country on St Patrick’s Day just to visit the “vegan chipper on Camden St”. She is slowly throwing out the animal products as demand requires. “First was fish, next is chicken”, she tells me.

We can also look forward to a less artificial chipper with the introduction of freshly-baked bread and popcorn cauliflower coming soon, as well as them hand-cutting every chip that lands in the fryer. It is more than apparent that its considered approach extends beyond their ingredients, and it’s only a matter of time before everywhere else follows suit.