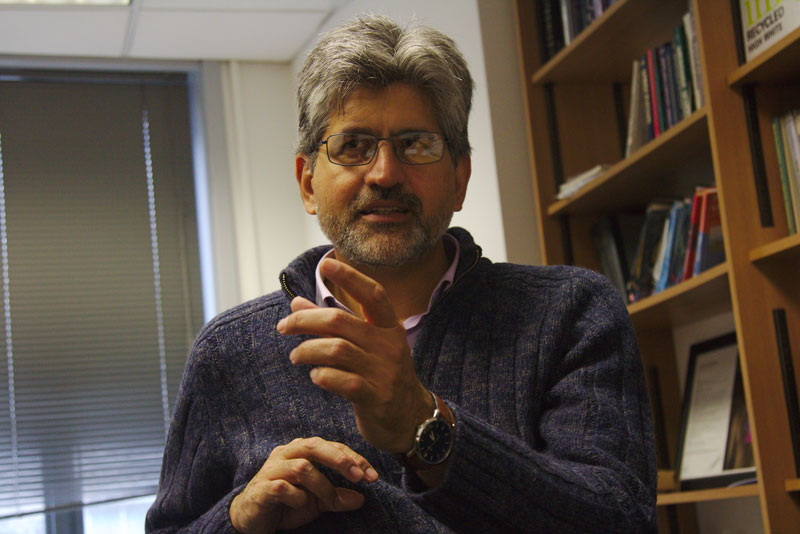 There aren’t many students who can say that their professor is an Oscar winner. Here in Trinity, however, there are several pockets of aspiring engineers who have that honour. Prof Anil Kokaram, the Head of Electronic and Electrical Engineering, received an Academy Award in 2007 for cutting-edge work in video and audio restoration – technology that has been used in blockbuster franchises such as X-Men, Lord of the Rings, and James Bond.

The people working behind the scenes in video and audio restoration are often the unsung heroes of the film industry. The technology developed by the likes of Kokaram have catapulted the cinematic experience to the next level, making possible stunningly realistic visuals and immersive film universes. Last year, Peter Jackson’s They Shall Not Grow Old brought the immense potential of video and audio restoration into the spotlight. The documentary transformed 100-year-old footage of the First World War into rich colour and sharp relief, giving viewers a startlingly vivid insight into some of history’s bloodiest battles.

At first, Kokaram’s interest in electronic engineering, and more specifically digital signal processing, was sparked simply by a desire to work with people from diverse backgrounds: “mechanical engineers, medical doctors, radiologists, people in movies, everybody”. In his second year of undergraduate study, he first came upon audio restoration. The technology came about as part of a renewed effort to conserve old gramophone records and LPs, when engineers sought to get rid of the crackly, grainy noise that could be heard on these old sound archives. “To me, it was amazing”, Kokaram says. “You take something that sounded horrible, and made it sound like a modern recording.”

His beginnings were humble, and Kokaram’s first big research project was a far cry from his more recent work: it was about frogs. “I’m originally from Trinidad, and a good friend of mine was a zoologist in the university at the time”, he explains, “We used to spend a lot of time in the bushes looking for rare species of frog and snakes and so on, and he recognised that identifying new species would be a lot easier if we had an automatic way.” The technology used was similar to human speech recognition, and sought to identify the frog species from their calls. “He spent a good few nights recording these calls, and then I spent about three months trying to build an automatic speech recognition system… for just three species! Three of the most common species that everybody knows, so it wasn’t actually that great, but still: it was the first project.”

We used to spend a lot of time in the bushes looking for rare species of frog and snakes and so on, and he recognised that identifying new species would be a lot easier if we had an automatic way

This work inspired Kokaram to continue in the field of restoration. He pursued a PhD in Cambridge University in Signal Processing, working with a British library to restore old video footage, which turned out to be from the Second World War. Restoration of these types of recordings, Kokaram described, involved “stabilising them and removing the holes and flashes of light”. Kokaram graduated with his PhD at a time when this signal processing technology was still brand new – and he was at the centre of it all.

Originally, Kokaram moved to Trinity in the late 1990s. By this time, there were concerted efforts by those in the video processing industry to devise ways of tracking motion in old archive footage, and of optimising poorer quality material to allow them to do this. Between 2011 and 2017, Kokaram was a leading figure in the Media Algorithms Team in YouTube, where they used these restoration techniques to improve the quality of videos on the platform.

Some of Kokaram’s most influential work began when he was working in the post-production industry, using motion estimation technology to produce effects such as slow motion, stabilisation and deflickering. “People don’t realise when they look at films, the visual effects in the obvious things”, he says, “You have to do a lot of processing with the visuals to make the picture look believable.” He takes, as an example, the placing of a synthesised dinosaur image into old film footage: “If the dinosaur looks pretty sharp and nice, and the film looks kinda grainy, you take the grain out of the film, put your dinosaur on the film, and then put the grain back.” This is something that happens all the time in film without viewers even realising. “It’s all part of building the suspension of disbelief in visual effects.”

The technology came about as part of a renewed effort to conserve old gramophone records and LPs, when engineers sought to get rid of the crackly, grainy noise that could be heard on these old sound archives

Kokaram became involved with a team of graphics innovators called The Foundry, and was “secondarily involved” in films such as King Kong and X-Men. Technology he developed went on to be used in The Lord of The Rings series, Charlie and The Chocolate Factory, The Da Vinci Code and Casino Royale. It was in recognition of this trailblazing work that his colleagues and he triumphed at the Academy Awards in 2007. Kokaram describes this as a “once-in-a-lifetime experience, a real outlier that will never happen again”. Kokaram attended the Engineering Ceremony of the Academy Awards in Hollywood, which take place a week before the awards for actors. “There’s a ceremony which is quite lavish and dinner and everything”, he says, “Every year they select a famous actor or actress to be the MC for the evening, so in our ceremony it was Maggie Gyllenhaal”.

Kokaram’s career has spanned academia, industry and Hollywood glamour. For now, however, he’s back in Trinity. But his life as a researcher – while perhaps not star-studded – is far from banal: “One thing that is good about a university is that you get to work on different things: motion picture restoration in the morning, and tracking lobsters at the bottom of the ocean in the afternoon.”