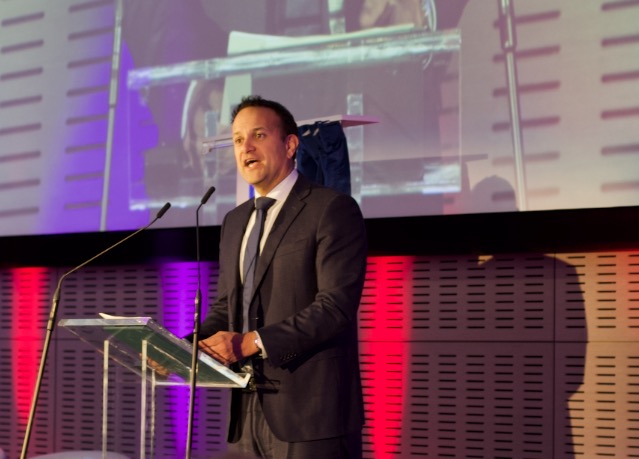 Taoiseach Leo Varadkar hailed philanthropy as “a form of patriotism” at the official opening of Trinity’s new Business School this afternoon, praising the “vision” of the building in a speech that focused heavily on industry and commerce.

Varadkar said the Business School is “representative of the comeback story of Irish universities”, and suggested that it represents “a new start” in Irish business education.

At the launch – which also featured speeches from Provost Patrick Prendergast and Andrew Burke, the Dean of the Business School – Varadkar tied together the new school and an Ireland that he said sees itself as “an island that’s at the centre of an interconnected world, committed to our EU membership, the United Nations, free trade and free enterprise”.

Ireland, he said, “rejects the pessimism of those all around the world” who “seem to want to go back to some sort of nostalgic before-time that probably never really existed”.

Varadkar began his speech by offering his thoughts to the family of missing Trinity professor Seamus Lawless, who disappeared last week after reaching the summit of Mount Everest.

“We’ve all heard about Shay as an inspirational character from all who’ve worked alongside him”, Varadkar said. He echoed the comments of Tánaiste Simon Coveney, who last week pledged government support to the campaign to help find Lawless. “Like all of you, I hope that Shay can be found and brought home”, he said.

In his speech, the Provost said that the new school – which has been under construction for six years – “will be transformational not just for Trinity but for Dublin and Ireland”.

Prendergast praised the sustainability of the building’s design: “It’s near zero energy, with solar panels, green walls, recycled water and fresh air flow. Even the cleaning system is chemical free.” 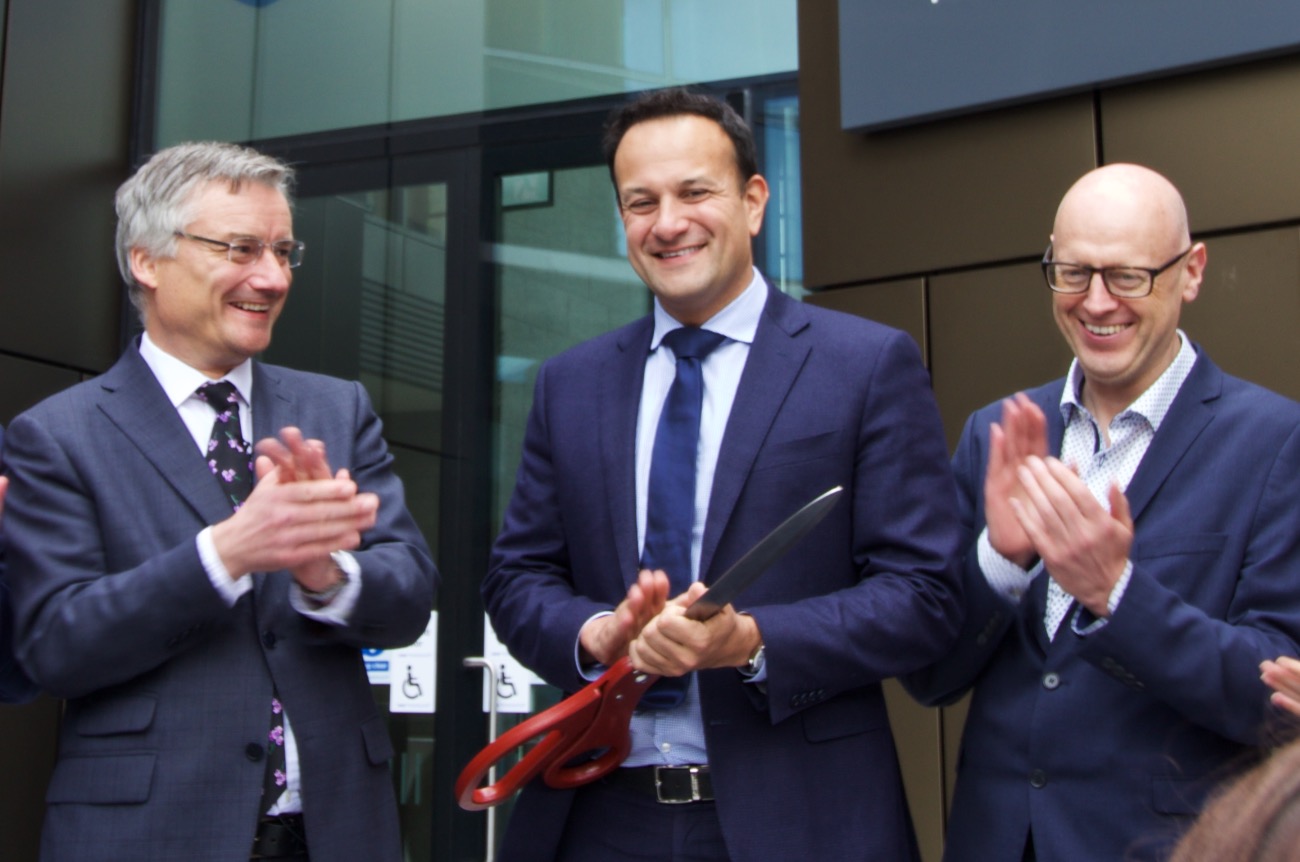 The Provost, the Taoiseach, and the Dean of the Business School all spoke at the launch of the new building this afternoon.
Eleanor O’Mahony for The University Times

“And the Trinity Business School, with its entrance onto Pearse St, further delivers on our mission to open out the College to the city and our neighbouring communities.”

“This”, he said, “is a building to inspire. I envisage it taking its place among the great business schools of the world”.

Burke, in his speech, praised the “phenomenal community” involved in the school’s construction. Those who worked on the project, he said, had helped create “what we call the Trinity DNA”.

Burke emphasised the importance of diversity and ethical leadership in Trinity’s Business School. “In terms of ethical leadership”, he said, “we want people connected with this organisation not just to have a moral compass but actually to make a real difference”.

“From the bottom of my heart I would like to thank everyone who’s played a part in this incredible journey”, she said.

Yesterday, the College Board held its first-ever meeting in the new building, which also houses a 600-seat lecture theatre and two floors dedicated to executive education.

The Business School will also contain a 300-seat restaurant, called the Forum, which will be run by multinational catering company Sodexo, which also runs the Perch cafe in the Arts Block. The restaurant has yet to open.

The building also offers a new home to Tangent, the “ideas workspace” of the College, which aims to train students in innovation and entrepreneurship.

In February, The University Times reported that the Business School would be verged on two sides by shrubbery, creating two living walls on the building’s facade.

At the time, speaking to The University Times, Burke said the walls “will add a nice bit of greenery on Pearse St”.

Over the years, the Business School has met obstacles that meant its launch was delayed and pushed back. Roadblocks included a dispute with Dublin City Council, which objected to several structural characteristics of the building, including a glass rotunda that the council deemed “not an acceptable form”.

In March, The University Times reported that the building would not be opened until May 23rd, despite plans for its completion early that month.