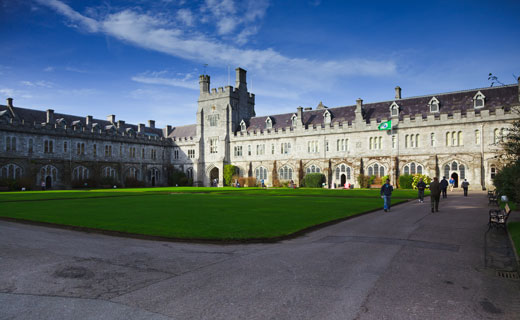 In a university context, we have the privileged opportunity to facilitate and support student development both academically and beyond. Traumatic incidents of sexual harassment and violence, unwanted advances and unsolicited abusive comments are a deeply ingrained societal reality and are no less prevalent among third-level students. By developing the University College Cork (UCC) Bystander Intervention programme we aim to raise awareness through education and empowerment about the destructive and devastating reality of sexual violence and harassment amongst third level students and indeed in society more broadly.

The UCC programme, modelled on the Intervention Initiative toolkit developed by Dr Rachel Fenton, seeks to create an environment that demands an awareness of the unacceptability of all such behaviour through educating our students and empowering them to recognise the problem, to speak up as part of a collective voice, and to reject, through safe and effective interventions, any attempt to normalise violence and harassment.

The programme has four central aims: introduce students to the concept of an active bystander; educate students to ensure an understanding of the key issues of consent, the boundaries surrounding sexual assault, rape and abusive relationships and the traumatic life changing impact of such violence; empower and upskill students to safely intervene and demand a safer campus and society with a zero tolerance of sexual harassment in all its forms, and ultimately to collectively develop a culture of positive responsibility and support within a visible institutional culture which stands against unacceptable behaviour and abuse.

A key personal and peer learning for students as to both the fact and impact of the silent normalisation of unacceptable behaviour is secured through the use of social norms questionnaires at the commencement of the programme. Too often, misperceptions of the likely behaviour of others serve to cultivate a misplaced false consensus of such behaviour and can reinforce a reluctance to object.

The questionnaires present a series of scenarios with the student acting as bystander to several events in social settings that are likely to cause discomfort for bystanders. The aim of these questionnaires is to expose the students to not only their own understanding and expectations of normalised behaviour, but also to those of their workshop classmates. In sharing the results of the questionnaires in workshop four, the class learns of the typically shared pro-social intentions of their peers. Over the two-year pilot at UCC, the student responses reflected a very high level of pro-social intentions, demonstrating a very proactive and socially aware student cohort.

However, they also demonstrated a relatively diminished level of expectation as regards the students’ views as to the likelihood of their peers having similar intentions. The students’ overwhelming instinct to intervene and comparatively reduced expectations of peers in the same situations reveals the prevalence of shared false perceptions of an unsupportive peer environment. By sharing these findings with students we aim to emphasise the importance of speaking up, while dispelling intervention inhibition in light of the uncovered fact of their peers’ shared values.

Introduced in 2016, as a programme-based, compulsory credit-bearing module, the UCC Bystander Intervention programme was piloted with first year law students in 2016/17 and expanded to nursing/midwifery and applied psychology students in 2017/18. The impact of the six-week programme on each of these student groups has been hugely positive, with 76 per cent of those engaging with our follow-up online survey reporting an enhanced awareness of opportunities where intervention would be appropriate, and 69 per cent reporting having made such an intervention. Eighty-three per cent of those students stated that since completing the programme they feel they now have the necessary skills to effect an intervention and 68 per cent indicated a desire to attend ongoing workshops to maintain their learning and intervention skills.

By sharing these findings with students we aim to emphasise the importance of speaking up, while dispelling intervention inhibition in light of the uncovered fact of their peers’ shared values

Since January of this year, the Bystander Intervention learning experience is now available online, expanding its reach, and realising the aim of making the programme available to all students at UCC. Participating students will secure a digital badge in recognition of their participation. They will be required to complete five one-hour online sessions and one final one-hour group workshop where they will discuss and role-play their learning. The inclusion of a practical workshops allows students to demonstrate the learned intervention techniques through both scripted and unscripted role-plays. The verbalisation in a safe environment of their internalised but too often silent reactions to uncomfortable or threatening situations plays an important role in giving students the confidence to speak up and realise their capacities as pro-social bystanders. By way of assignment, they will be required to reflect on the module content, and can do so through various forms of expression, including essays, diary entries, video recordings, dance or other performances. Delivery and impact of the material will be monitored closely, with ongoing student engagement, feedback and evaluation.

Ultimately, what is needed for a safe third-level experience is a shared culture and a shared expectation of respect and freedom from all forms of abuse. The future for proactive student engagement and education is this field is promising, inspired by the vision of Minister Mary Mitchell O’Connor in demanding change. It is hoped that recent work led by Mitchell O’Connor through the appointment of an expert group to develop key strategies and expectations across the sector will have a significant impact. This is a hugely important issue for third-level students and a very real collective endeavour is necessary to effect cross-institutional change and with management support, as is evidenced in UCC, there exists both appetite and capacity for positive and affirmative progress to be made. In tackling this destructive social behaviour through positive education, student empowerment and university management support, cultural change can be achieved.

Dr Louise Crowley is a senior lecturer in family law at the School of Law, University College Cork.