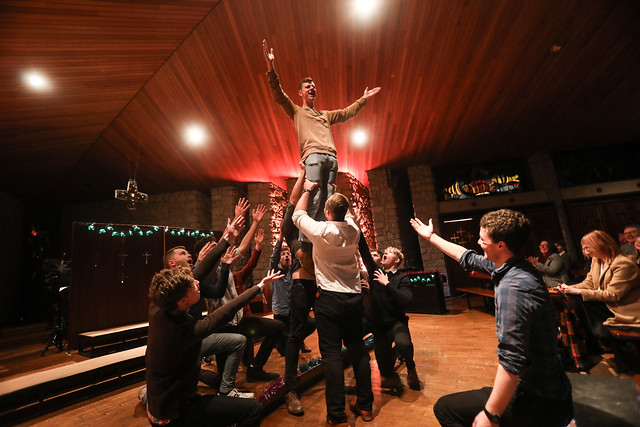 At this time of year there may be the desire to distance oneself from university life and rediscover life on the periphery, with its slower pace and retrospective philosophy. It is well to note, however, that there was still no shame in attending the sophisticated Tone-ing in the Years, the Trinitones’ end-of-year concert. Despite its cumbrous name, the gig saw the group in good form, striking a well-practised balance between silliness and sincerity and offering a crash course in music from the 1960s up until the present day.

It is 7.30pm and the venue is Dublin Unitarian Church, a Gothic 19th-century structure situated on Stephen’s Green. Inside, the mellow light of the summer evening leans into the latticed stained glass. Perhaps it is the high ceilings of a church that always lend a sense of occasion, or perhaps it is the fact that this is the final Trinitones gig in Ireland this year before they head across the Atlantic for another US tour, but the chattering voices are lively as family and friends trickle into the church and take their seats. There is a hush and then applause as the white-shirted Trinitones present themselves in a line.

Facing away from the pews, they form a reverential arc as four members step forward to perform. It is a moment of grandeur until the performers, to the mirth of the audience, don rainbow propeller hats, with the ramshackle humour that has become their calling-card.

A winsome rendition of “God Only Knows” by the Beach Boys starts the show before the group, snapping fingers and twisting hips, wind their way down the aisle of the church. “With a Little Help from My Friends” brings the 1960s to an end.

The next decade begins with the appealing slow winding of “Sunny Afternoon”, Trinitones member Sam White channeling the Kinks from on high in the pulpit. A satirically adenoidal recital of Grease’s “Hopelessly “Devoted to You” – delivered with pinched noses so as to deliver a 1970s twang – brings us to a timeless classic, “Raglan Road”, the first song on the group’s upcoming album. They head to Waterford this week to record it.

When it is their turn to speak, each member sends a ripple of laughter through the pews before the diverse repertoire of the Trinitones changes the mood from tune to tune. Under the stewardship of Andy Keenan, the Trinitones have consciously trod the line between madness and meaning and Tone-ing in the Years, his last gig on Irish soil, is no different. “When She Loved” me after the interval is melancholic and choral in a seemingly darkened church while “Your Man (Baby Lock The Doors)” is a show-stopping country spoof delivered by Cathal Dervan.

Sean Kingston’s “Beautiful Girls” is interrupted by “Stand by Me”, before Barra MacMahon leads a soulful “Put Your Records On”. Ariana Grande’s “Seven Rings” is a modern-day history lesson: Dahnan Spurling sings “I want it” to the left side of the church, “I got it” at the right.

Evan Holland, the group’s co-director, is also playing his last Trinitones gig in Ireland, and the night ends with a note of farewell to him and Keenan as the group assemble in a half-circle for a rather moving arrangement of “Over Soon”.

Still, as goodbyes go it is still a light-hearted one, even when some members raise their arms in the “Three Finger Salute” from the Hunger Games. The journey is not yet over. Trinitones will visit Vancouver, Portland, San Francisco, Seattle, Yosemite and Los Angeles this summer as part of a three-week tour of the US.

Speaking to The University Times, Keenan said: “I’ve been very lucky to serve the Trinitones as director over the last two years. My job was made so much easier and even more enjoyable after Evan Holland joined me as co-director last summer.”

“I’m looking forward”, he said, “to playing my part as we head to Waterford this week to record our first album, which showcases everything we’re about: hard work and honest fun”.