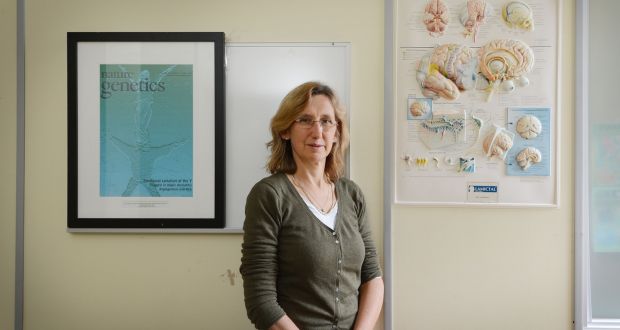 The research was co-led by Prof Orla Hardiman, the head of neurology in Trinity.
Alan Betson

A team of Trinity researchers has become the first in the world to show that gender can affect the heritability of motor neurone disease (MND).

The research, led by Prof Orla Hardiman, the head of neurology at Trinity, and Dr Russel McLoughlin of the Smurfit Institute of Genetics, is the largest-ever study of MND, involving 1,117 patients. The study was published today in the journal JAMA Neurology.

MND is a fatal neurodegenerative disease affecting 1 in 347 men and 1 in 436 women.

Lead author and PhD student Dr Marie Ryan has shown that genetics account for 52 per cent of the risk for developing MND, highlighting the importance of understanding the “gene-environment interaction” aspect of MND.

It also suggests that other factors play a role in developing the incurable disease, and that understanding these factors is a pressing issue if advances in treatment options are to be made.

The study has also shown that the overall risk of developing the disease among other family members remains low.

Ryan studied the 10 per cent of the MND population with a genetic mutation known as C9orf72, and found that those who carry this gene were more likely to inherit it from their mothers, a novel finding that has never before been shown.

“While difference inheritance patterns based on who transmits the gene have been reported in other neurological disorders, this is the first time this kind of inheritance pattern has been discovered among those with motor neuron disease”, Ryan said in a press statement.

“The main message is that genetic and non-genetic factors contribute equally to one’s risk of developing MND. The fact that 50 per cent of the risk is found within our genes supports our ongoing search to identify the many interacting genes that contribute to the causes of motor neuron disease”, she said.

Hardiman said the study “will help us to find new treatments for this devastating condition, by pursuing a precision medicine approach”.

Researchers in Hardiman’s lab have already unearthed genetic links between MND and other conditions such as schizophrenia, paving the way towards a more thorough understanding of the genetic drivers for MND.

“We have already found that MND can cluster with other conditions including dementia, schizophrenia, bipolar disorder, autism and addiction disorders in around 30 per cent of families”, Hardiman said.

“This means that multiple genetic factors working together are likely to play an important role in developing MND. Finding how these genes interact will help us to find new and better treatment.”

MND is a fatal condition with an average life expectancy of between two and three years. Over 350 people in Ireland currently suffer from MND, with one person diagnosed every three days.