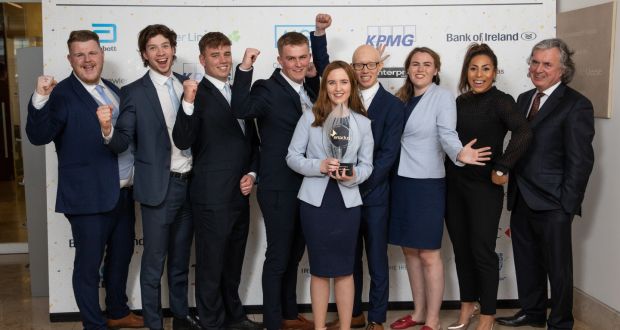 Members of Trinity Enactus celebrate the society's win at the Enactus National Competition in May.
Naoise Culhane

While the world’s attention this summer was focused on the drama of the Women’s World Cup, a team from Trinity was working on representing the College in a World Cup of a very different kind. Swap football boots for three-piece suits, and football matches for engaging team presentations, and you are some of the way towards describing the Enactus World Cup.

Enactus is a student-led organisation that aims to provide students from around the world with the entrepreneurial and leadership skills needed to achieve its aim of creating a more sustainable world. The organisation is present on 1,730 third-level campuses worldwide, and it operates with the support of over 550 donors from across global business and commercial sectors. Its annual World Cup provides its members with the opportunity to showcase their work in front of some of the most experienced and respected social innovators in the industry.

In Trinity, Enactus is led by Erin Kehoe, a business and economics student who took over the role of co-team leader at the end of September 2018.

Speaking to The University Times, Kehoe explains that, for her, Enactus represented the path she was always going to go down – even before the reliable chaos of freshers’ week: “I saw the list of societies released by the Central Societies Committee. I circled Enactus as it interested me and I got involved from freshers’ week of first year.”

The most rewarding thing for Kehoe, she says, was “listening to the testimony of the homeless leaders in the Hope project, and seeing our hard work paying off”

Three years later, Kehoe will travel to California in September for the three-day World Cup in which her society will compete against universities from 37 countries by pitching unique social enterprise projects in a bid to take home the title. Having become the first Trinity team ever to win the Ireland’s Enactus tournament, Trinity Enactus will present the three projects that earned the society a win in Ireland’s Enactus competition last month. The first, called Hope, gives homeless people an opportunity to earn a wage while developing their leadership skills as they take on the role of football coaching. KeepAppy is an app developed by Enactus to act as a virtual toolkit for maintaining mental health. Although it is a for-profit initiative, its makers commit to providing free lifetime membership to one person in need for every paid subscription they receive.

The final project is called 2030 Leaders. It aims to help disadvantaged young people, between 16 and 24 years old, with the social and leadership skills needed to help Ireland achieve its UN Sustainable Development Goals. The common theme running throughout each of the three projects is an aim to empower disadvantaged youth to overcome the adversity they face, while making a positive social impact in a financially and environmentally sustainable way.

The three-day event will require competing teams to present their projects in three different rounds, before being whittled down to the final four. The finalists will compete against each other with their own 10-minute presentations, each followed by a questions and answers session with a panel of expert judges. The team representing Trinity this year will consist of six members: Kehoe, Daire Hennessy, Rudy O’Leary, Aimee Carton, Scott Byrne, and Charlie Quirke.

Asked about the benefits of being involved in social entrepreneurship, Kehoe is keen to emphasise the impact an individual’s work can have on a group of people. The most rewarding thing for her, she says, was “listening to the testimony of the homeless leaders in the Hope project, and seeing our hard work paying off”. To any students considering taking the plunge into social entrepreneurship with Enactus this year, Kehoe assures them that it is worthwhile: “Every hour is used so well. We counted 3,000 hours by our members this year alone.” The potential for internship opportunities with KPMG, one of the society’s partners, is an added bonus.

Although such projects can be a significant time commitment for students, Kehoe’s advice is to persevere: “Even if it sounds like a lot of work, stick with it. The best thing about social entrepreneurship is knowing that you, too, are able to make and effect positive change.”