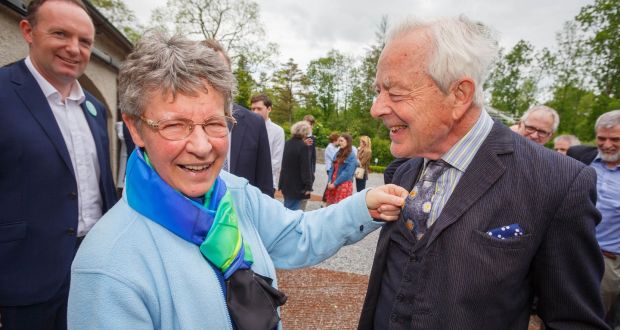 Former Trinity Pro-Chancellor Dame Jocelyn Bell Burnell at the launch of the centre.

Trinity’s School of Physics has helped found a new astronomy centre in Birr, along with Birr Scientific and Heritage Foundation and Offaly County Council.

The Astronomical Midlands, or Astrolands, will be located in Birr Castle, which already houses a radio telescope called I-LOFAR. It has contributed significantly to international space research since its installation in 2017.

The Irish Times reported that Prof Peter Gallagher, the head of the I-LOFAR project, said: “AstroLands will open new conversations with groups that have had little involvement with science, technology, engineering and maths using this unique new facility at Birr. This is a wonderful opportunity to carry forward the rich scientific heritage of Birr.”

Gallagher, who left Trinity in October 2018 to become Head of the School of Astrophysics at the Dublin Institute for Advanced Studies, said that the centre will “inspire the next generation of scientific explorers”.

Dame Jocelyn Bell Burnell, a former Trinity Pro-Chancellor and an acclaimed astrophysicist, was in attendance at the launch.

The centre includes three programmes aimed at engaging midland communities with astronomy. Space4Exploration, based in the I-LOFAR Education Centre, Space4Students, which involves space camps that run for a day or a week aimed at students aged between 10 and 14, and Space4Teachers, which offers workshops to teachers based on the junior certificate themes of earth and space.

Gallagher is a former Trinity professor of astrophysics. Speaking to The University Times in January 2019, Gallagher said: “Science outreach is more than important – I think it’s vital.”

“Every Irish student”, he said, “finishes secondary school being – at the very least – aware of Ireland’s literary greats: Oscar Wilde, James Joyce, the likes. But for a country that has had such a rich and varied scientific history, students are so unaware of Ireland’s brilliant scientific minds: William Rowan Hamilton, Robert Boyle, Stokes – among so many others”.

Without such role models, he said, “it’s very easy for them to be talked out of or scared of a career in science. So that’s what we need to make sure we’re doing: reaching those people who need to see someone like them in these careers so they can know that they can do it too”.

A telescope was first built in Birr Castle in the 1840s. It was the largest in the world for 70 years, aiding the discovery of the spiral nature of galaxies.