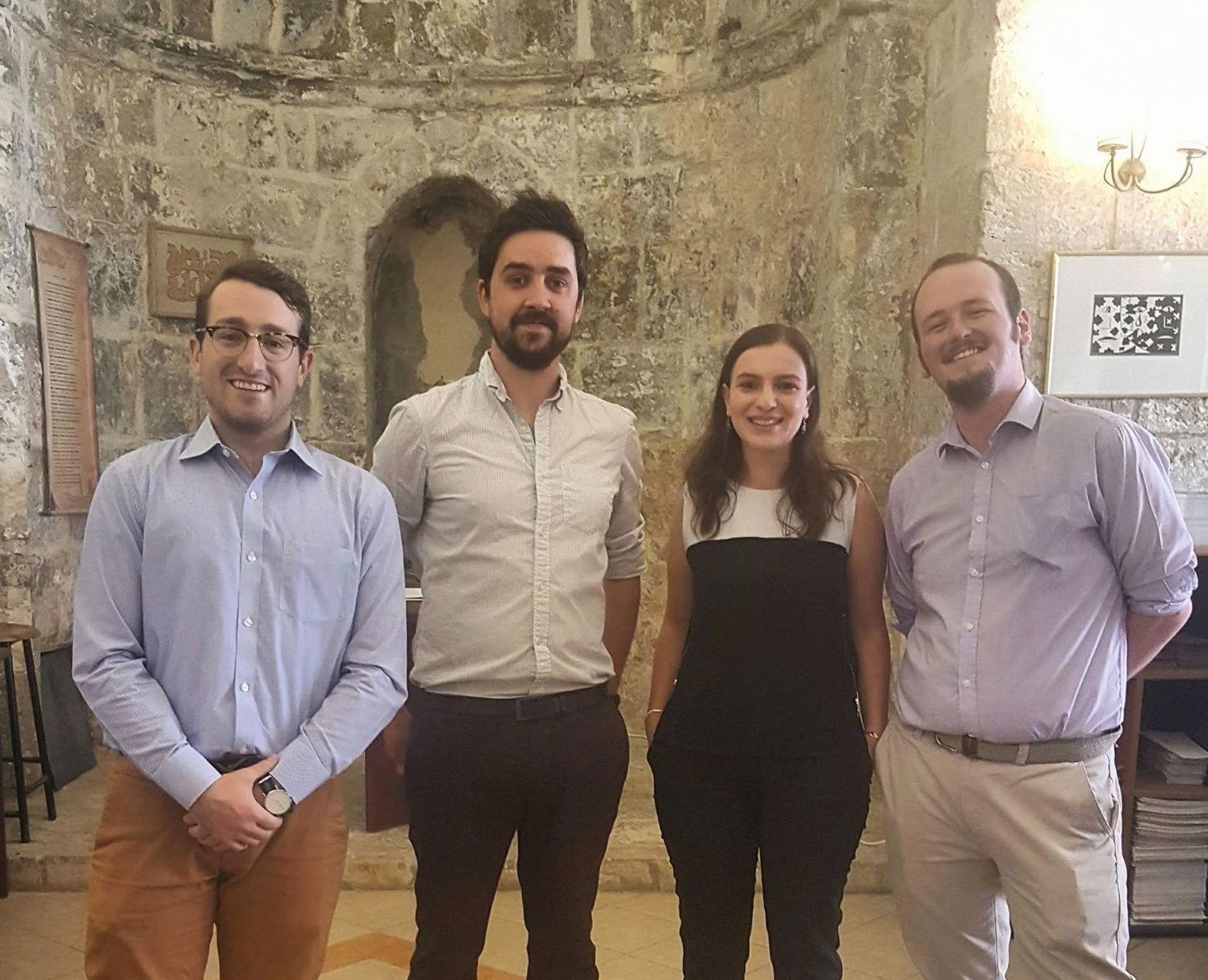 On May 14th, 2018, 58 Palestinians were shot dead by Israeli forces in Gaza while protesting the opening of the US embassy in Jerusalem, on a day labelled the region’s deadliest in years.

Four Trinity students – all participants in an internship programme run jointly by Trinity’s School of Ecumenics and Palestine’s Al Quds University – were in Jerusalem on the day of the massacre. One, Anna Badillo, tells The University Times it was a turbulent afternoon: “We were responding with petitions, emails, a collective letter of different human rights organisations speaking out against it.”

Badillo, a US-born activist who obtained her master’s in international peace studies in 2018, was one of four Trinity postgraduate students who spent six weeks last year working in Al Quds University’s community action centre in the heart of Jerusalem’s Old City.

Another, Justin Holmes, says navigating the experience “was overwhelming a lot of the time. It was quite shocking how blatant everything was. Living there was amazing as well as horrible. You see very quickly the treatment of Palestinians by the military, by the police force”.

If last year’s cohort experienced the conflict at its most fatal, they were not the first: since 2016, Trinity has been quietly sending students to the Al Quds University – the only Palestinian university in Jerusalem – to document human rights abuses against Palestinians in the West Bank.

For its first two years, the internship existed without College-level recognition. But in May 2017, at a ceremony in the community action centre in Jerusalem, Trinity’s School of Ecumenics signed a memorandum of understanding – the College’s first with a Palestinian university – with the Al Quds University Human Rights Clinic, creating concrete ties between the institutes.

If the Trinity–Al Quds internship seems incongruous, in a university often accused of cosy links with Israel, then that’s perhaps because it is. In August 2018, two months after the Gaza shootings, Provost Patrick Prendergast praised College’s partnerships with Israeli institutes and criticised anti-Israel protests that had occurred on his campus the previous year. The College also has a memorandum of understanding with the Hebrew University of Jerusalem, located deep in the West Bank, and has staged symposiums with the Weizmann Institute of Science. Trinity didn’t respond to an email sent by The University Times asking if it supported the work carried out by its students during the internship.

Those involved in the programme, however, say its success represents great progress for the College, a sign that its approach to the region might be starting to turn.

Prof Brendan Browne, the founder of the internship and co-ordinator of a master’s course in conflict resolution and reconciliation in Trinity’s Belfast campus, tells The University Times he worked “very intentionally for a year and a half” to convince the College to sign the memorandum with Al Quds. “What I wanted to do”, he says, “is to get College’s stamp of approval, and say, ‘Hey, we are happy to be involved in working with Palestinian organisations and Palestinian universities’. And that was very important for me, for political reasons”. In 2017/18, the same year the memorandum was signed, Browne was shortlisted for the College’s inaugural Civic Engagement Award, “for cultivating meaningful community interactions for his students, in both Belfast and Jerusalem”. He was also nominated for the award in 2019. 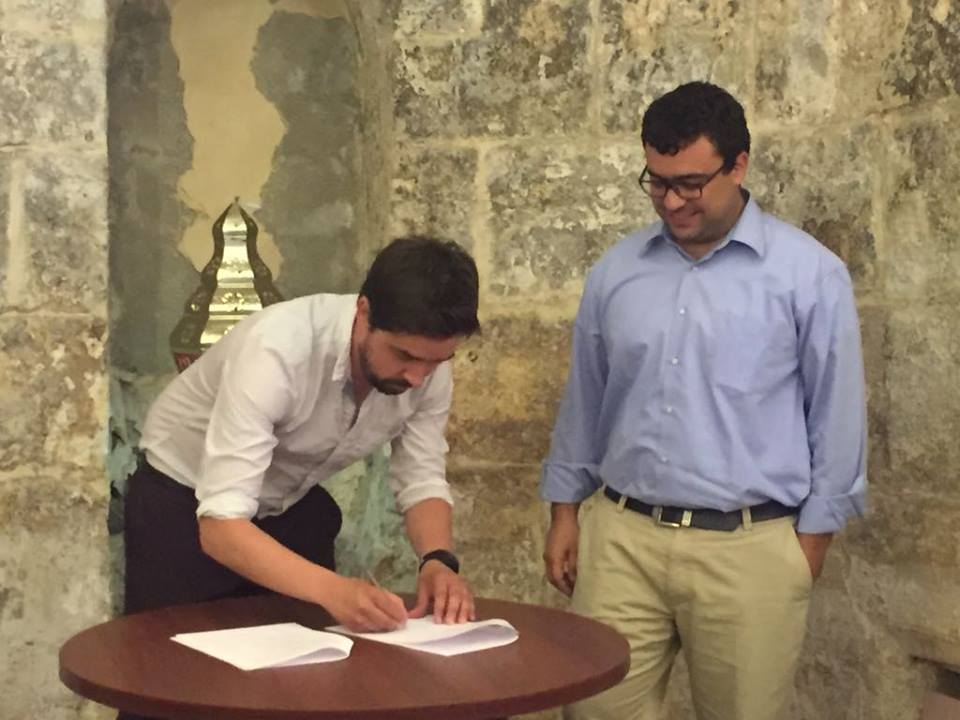 The signing of a memorandum of understanding between Trinity’s School of Ecumenics and the Al Quds University Human Rights Clinic.

Having lived and worked in Palestine until 2016, Browne – the winner of the Provost’s teaching award in 2018/19 – is well-versed in the particularities of the conflict. And if there’s anything that stands out about the Palestine internship, it’s how political it is. Many of the interns are heavily critical of the Israeli regime, and of Trinity’s links to organisations there.

Michelle Anderson, one of two students to travel to Jerusalem in the programme’s first year, says the reality on the ground is “incredibly angering”. A trip to Jerusalem, she says, “smacks you in the face with the reality of the apartheid there, and the conditions”.

You see all this thing about the Provost going to Israel, and solidifying ties, and bringing in funding. And then Brendan’s literally on his own, pushing this

Sam Scanlon, a participant in the programme in 2017, says “you see all these things about the Provost going to Israel, and solidifying ties, and bringing in funding and all this kind of thing. And then Brendan’s literally on his own, pushing this”.

Anderson, as part of her work, documented housing demolitions carried out by Israel as a way of sanctioning Palestinians. As often as not, she says, the punishment was collective: “There was one family who the son had thrown a stone at a car. And as punishment for that action – which he wasn’t actually put to trial for, he was just put into prison – they sealed the entire house.”

Other former interns tell similar stories, and a picture quickly emerges – of the harsh conditions for Palestinians living under Israeli occupation, and of the enormity of the stories and experiences the interns were exposed to.

Badillo describes a bus journey from Tel Aviv in Israel to Jerusalem during which she sat opposite an Israeli soldier: “His gun was laying in his lap, and his gun was pointed right at me.” For many in Jerusalem, she says, this is quite a normal experience.

But if their safety is ever in danger, the interns agree, it’s not from the Palestinians. “The only people that you ever have to worry about are the ones holding the guns”, Holmes says. “And there’s only one side doing that.”

While the practical side of the internship put some out of their comfort zone at times (“You think you’re used to it”, Scanlon says, “and then something else happens and you’re like, ‘Oh fuck, I guess I’m not used to it’”) everyone involved agrees it underpins the entire programme.

Nada Awad, who served as the international advocacy officer of the Al Quds community action centre for three of the internship’s four years, says that on the day of the massacre in May 2018, “the students saw something that cannot be read in an article. They really lived an experience that is really historical today. What they saw on the ground was a historical moment”. 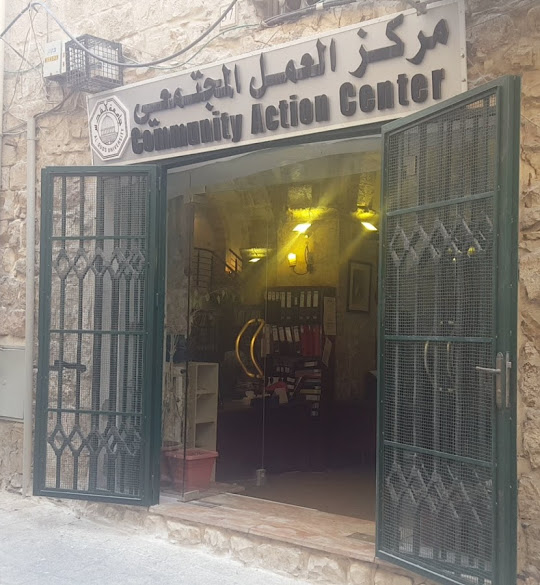 The Al Quds community action centre where the Trinity interns spent most of their time.

Dr Munir Nuseibah, the director of both the community action centre and the Human Rights Clinic in Al Quds, says “we want them to learn about us, about Palestine. We feel that there is something important and valuable in learning about the human rights issues in Palestine generally, and in Jerusalem specifically. So that this experience will probably stay with them for the rest of their lives”.

This, it seems, is the aim, and often the upshot, of the programme. All of the interns say they returned from Palestine with a new understanding of just how internecine the conflict is – and how intractable.

Scanlon says that “you put boots on the ground in Jerusalem and immediately you realise: this is not right”, while Holmes says many of the experiences he went through in Jerusalem offered an acute reminder of the privilege he enjoyed as a US citizen. “Anybody can see that you walk right by a soldier and you’ll never be stopped, but the five people in front of you and the two people behind you, they’re stopped. It doesn’t take imagination to understand why.”

If it’s not hard for the interns to understand their privilege, it’s also probably not too difficult to guess why it took so long for Browne to get College to sign off on the memorandum of understanding. Even allowing for Trinity’s famous bureaucracy, a year and a half is a long time to wait to be allowed to sign a document, especially given the memorandum of understanding that already existed between Trinity and Israel’s Hebrew University.

Browne isn’t saying anything, except to acknowledge the lengthiness of the process. He says some of the people he worked with on the memorandum, including the College’s Global Relations Office, “gave me some good advice on how to set up an MOU”, and stresses that the memorandum represents progress for the College.

Some of the interns are more forthcoming. Scanlon says with a grin that “by virtue of studying under Brendan, you realise that pretty much everything you’re doing is out of kilter with the College. Because while he is a highly respected academic who’s really good at what he does, he very much pushes against the grain”. Anderson, who calls Browne “incredible”, says he’s done “very well” to secure College recognition: “He’s fighting the hard fight, for sure.”

For Browne, a symbol of the advances Trinity has made came in the form of the visiting professorship it awarded Nuseibah in 2018, allowing the man responsible for the programme in Palestine to visit College and give lectures on the conflict. Nuseibah says the the visit “was one of the most important trips I’ve made in my life”. He says he was aware of Trinity’s Israel affiliations, but insists that everyone was “friendly and nice. Because I’m a guest at the end of the day, so…”.

All of the interns interviewed by The University Times say the programme has impacted dramatically on their worldview and professional aims. For Scanlon, “it has definitely shaped what I believe I feel I have to do. I genuinely care about the effects involved in conflict”. Anderson says it took a while to process the significance of the experience: “Only recently have I realised how big of an impact it made on me and what I want to go on and do.”

Nuseibah calls Browne a “very special man”: “I think that he is doing very important change in his university, and that this co-operation is very important. He’s investing his time because of his moral commitment to justice.”

For Anderson, the internship’s real importance lies in the fact that it represents an opportunity for Trinity – “to be able to see two sides of a conflict that the university so far has only leaned towards one”.

Update: 19.08, August 6th, 2019
This piece has been updated to reflect the fact that Prof Brendan Browne was shortlisted for the College’s inaugural Civic Engagement award in 2017/18, and nominated in 2019.