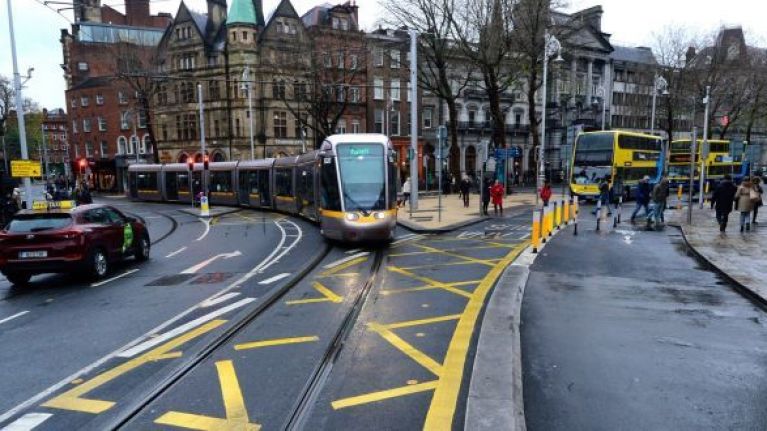 Cyril Byrne for the Irish Times

After being closed to traffic on three separate days over the summer to trial a pedestrian-only plaza, College Green will again be shut off to traffic on Sunday, September 22nd.

Dublin City Council will provide free entertainment for families on the street to mark both Car Free Day and European Mobility Week.

The area in front of Trinity, which extends down towards Dame St, will be closed to vehicles from 7am to 7pm.

The council came under fire on the first trial day after barriers around the area restricted accessibility to the pedestrianised area. These barriers were removed for the second and third trials.

The council applied for planning permission for the development in July 2017. It was met with staunch opposition from local businesses, many of which voiced fears that they would lose customers as a result of the loss of cars through the area. Dublin Bus also described the move as “socially regressive”.

The initially plan was subsequently scrapped in November 2018. However, in January of this year, the council announced that the pedestrian-only plaza would be trialled over three consecutive Sundays during the summer.

In July, the Irish Times reported that a number of taxi drivers had expressed serious concerns about the effects of the traffic closure, with one driver likening the move to “closing off the M50”.

Trinity has been closely consulted by planners since the beginning of the project.

In September 2017, information obtained by The University Times under the Freedom of Information Act revealed that College had several concerns about the new plaza, including increased footfall through the front gate and a risk of flooding.

Speaking to The University Times at the time, Veronica Campbell, the College Bursar, said that Trinity is trying to find “a balance between the use and the aesthetics of the College plaza”.

The council’s plans for the plaza include the construction of new cycle routes and the repositioning of existing statues in College Green. Trees and benches are to be installed in the space, as well as a new water structure.

European Mobility Week is an initiative to encourage local authorities to present sustainable transport alternatives to their local residents, and to raise awareness of the challenges that cities and towns are facing as a result of transport pollution.