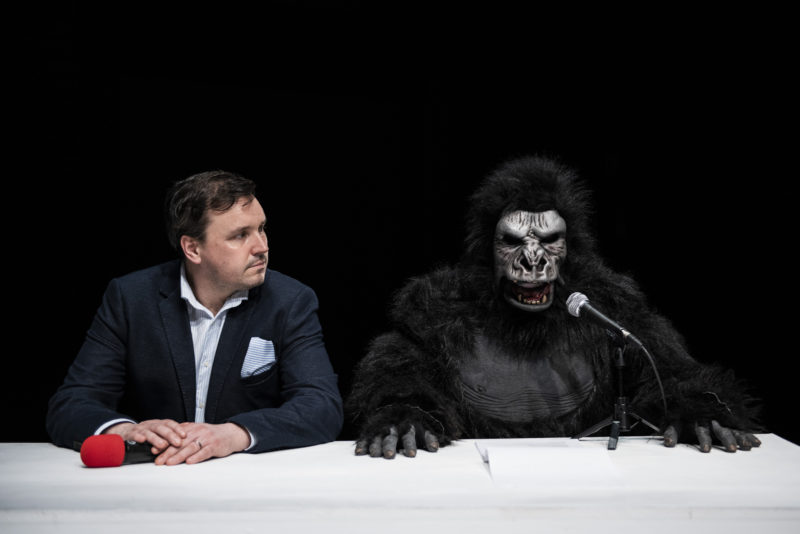 As teeth-gritting performances go, The Examination, currently running as part of the Dublin Fringe, sets the bar high. The piece, part of a five-year academic research project, is staged by theatre company Brokentalkers and focuses on health services for patients within the prison system.

Initially, the auditorium of Project Arts Space Upstairs is greeted with caricatures of the clinical and the farcical. The play’s co-director, Garry Keegan, wears a pristine business suit, while comedian and ex-prisoner Willie White wears a gorilla costume. At this point, I replay the premise of the production in my mind and distinctly recall it without any promise of a punchline.

Set designer Ger Clancy creates an origami-esque construction of a padded prison cell. As it transforms into an AV projection, the piece takes a sharp turn. The audience is addressed directly and asked to treat convicts “not as animals in a cage, but as human beings”.

In contrast and quick succession, Keegan introduces Cesare Lombroso’s theory of “the born criminal”. Through discriminatory physical descriptions, he turns his back on the gorilla to educate the audience on identifying predestined malevolence and the importance of their instinctual prejudices – all in the name of safety. The process of dehumanisation has begun.

The distance between Keegan and White – free man and convict, man and beast – remains perforated throughout. Orders of “Speak!”, “Dress!”, “Strip!” from Keegan reverberate through the space with a haunting sense of familiarity, as White, in gorilla form, succumbs to subordination. Whenever conversations of virtue, human experience, torture or tattoos find level footing for a moment, Keegan places the microphone between his words and White’s ears once again. With a pang of guilt, the audience begins to feel uneasy in their camaraderie. The play’s lighting designer, Stephen Dodd, makes cunning use of looming shadows to draw fascinating contrasts between the power-positions of the accused and the accuser, as accusations flit between that of crime and of prejudice.

Time spent doing music and drama “inside” is reflected in scattered cultural references. The prison identification number “24601” calls to mind Jean Val Jean from Les Miserables and confusion arises over the enigmatic character of George Bernard Shaw. The Wizard of Oz features heavily, presumably due to its sordid production history and “want to go home” sense of displacement. “Over the Rainbow” is even sung at the play’s emotional climax. While a much-loved ballad, the song originally sung by a young girl torn from her home by a freak natural disaster, and often associated with anti-semitism in Europe, seems like an unnecessary stretch in this instance. Prison detention by its very nature is an undesirable consequence rather than a tragic occurrence.

While The Examination does offer a multitude of perspectives on victims’ vengeance, health and safety concerns, ignored legalities and the tax-payer’s burden, at times the performance romanticises prison suffering. This fantastical yet loose comparison is one such case.

My favourite aspect of the production, however, never graces the stage. The high emotion and disparity of perspectives onstage find their match in the onlooking audience. In the cloaked darkness of the Space Upstairs, reaction becomes a team sport. White’s colloquial gruffness is rewarded with low, hearty chuckles from some, situational irony receives appreciative titters from the back rows and reasoned arguments are met with a myriad of aggressive nods and scoffs. At a glass-shattering climax, a young woman audibly yelps “Oh My God!” as gasps are expelled from all four corners of the space. Meanwhile, a man to my left sharply elbows his companion, chuckling: “He’s havin’ a smashin’ time anyways!” That’s the gift of theatre at its best – everyone buying the same ticket but each watching a different show.

The Examination runs until September 14th at the Project Arts Centre – Space Upstairs. Tickets are €16 or €14 for concessions.