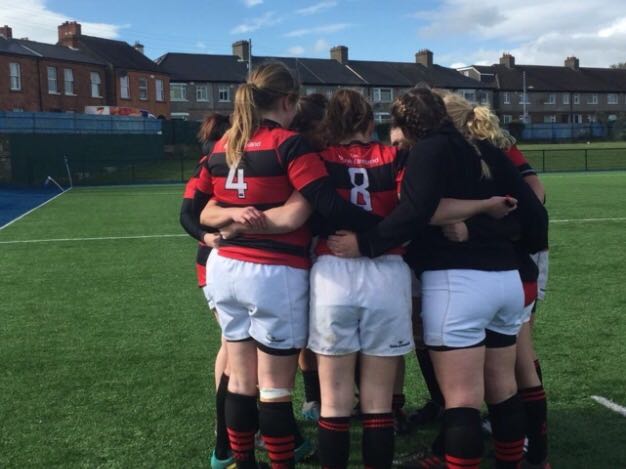 DUFC controlled the match for vast periods, and never looked like they were under pressure. Despite the best efforts of Mullingar’s fly-half Ciara Faulkner, this afternoon’s result was never in doubt.

Play in the first half was contained for the most part in Mullingar territory. Right from the off, Trinity’s Juliet Byrne secured possession, before Honor McNamara launched the ball into the Mullingar 22 with a well-placed kick. McNamara’s kicking would prove to be critical in DUFC’s dominance of the match.

Trinity pinned Mullingar back in their own 22 for extended periods in the early passages. Defending well initially, Mullingar’s line began to creak in the face of wave after wave of Trinity attacks. The breakthrough came through Trinity full-back Niamh O’Kelly-Lynch, who was released by McNamara and used her pace to race over the tryline. A missed conversion left it at 5-0.

The restart saw Mullingar enjoy a brief stint in the Trinity half, but action was soon back in the Westmeath side’s 22. McNamara’s superb territorial kicking again piled the pressure on Mullingar. It wasn’t long before DUFC were bearing down on the tryline again – Ellen McGee’s offload to Tara Coleman set the winger up to double their lead after 22 minutes.

Trinity refused to allow Mullingar into the game, and not long after the second try McGee turned provider once again, this time for McNamara.

After the restart, an attempted clearance from Mullingar’s Ciara Wynne was collected by Dwyer, who broke for the line and crossed over to make it 20-0. McNamara scored the conversion after three previous missed attempts.

Just as Trinity looked to be closing out a flawless first-half performance, a moment of individual brilliance from Mullingar’s Faulkner saw the fly-half dummy past the Trinity defence, before crashing over the tryline to hand her side a lifeline. She converted her try, leaving the half-time score at 22-7.

Play restarted in the second half in much the same fashion as the first. Trinity won a penalty in the Mullingar half after it was deemed that they were not releasing the ball. Spotting an opportunity, Trinity’s Byrne took the penalty quickly, running at the Mullingar defence. The ball found its way to Katherine Moore, who grounded the ball for the fifth try. McNamara looked composed as she added the extras.

After a lull in play, O’Kelly-Lynch’s explosive pace again punished a helpless Mullingar defence. Combining with McNamara and Moore, the full-back breezed by half-tackles before touching down underneath the posts. McNamara’s conversion made it 36-7.

With the game seemingly way out of reach, Mullingar began to enjoy some success mid-way through the half. Contesting the ball with more aggression, the away side made yards and threatened the Trinity backline. A knock-on committed by Byrne gave Mullingar a chance to utilise their scrum in the Trinity 22, and a quick move off the back of the set-piece allowed Faulkner in for her second try. Two added points left the score at 36-14.

Trinity continued to hold out under pressure – a crucial McNamara tackle on Michelle Morris prevented a certain try. However, not long after, a break from midfield saw an inspired Faulkner burst through the DUFC defence again to complete a hat-trick of tries for the afternoon.

With the gap cut to 17 points, Trinity sought to quash the Mullingar revival. After holding up Susie Burzawa on their tryline, DUFC worked hard to get the ball in the Mullingar half again. Pressure was soon back on the away side, and a superb carry from Moore off a stolen line-out saw her reinstate Trinity’s dominance in the match, crossing the tryline and adding to Trinity’s points tally for the first time in well over 15 minutes. McNamara, finding consistency with her kicking, added two more.

With Trinity looking to finish strong, O’Kelly-Lynch again tested the Mullingar backline with her pace. She was unlucky not to complete her hat-trick, held up by some solid defensive work by the visitors. With players camped in the Mullingar 22, Byrne found space and dived over for the last try of the match. McNamara, capping off a tremendous individual performance, tapped over to leave the final score at 50-19.

Speaking to The University Times after the match, DUFC captain Genevieve Ruesch was visibly delighted with the result: “Obviously it was our first Division 2 game, so it’s great to have a win under our belts. It’s such a great set up for our season.”

“It’s great to see the new girls come out and really get into the game … optimistic for the rest of the season, for sure”, she added.

While it would be unwise to make grand statements this early in the season, Trinity’s dominance today is a very promising sign. As a newly promoted side, scoring eight tries on the opening day is a bold statement to other league rivals.

DUFC continue their league campaign next Sunday, when they travel to Gordon Park to face Clondalkin Rugby Club.