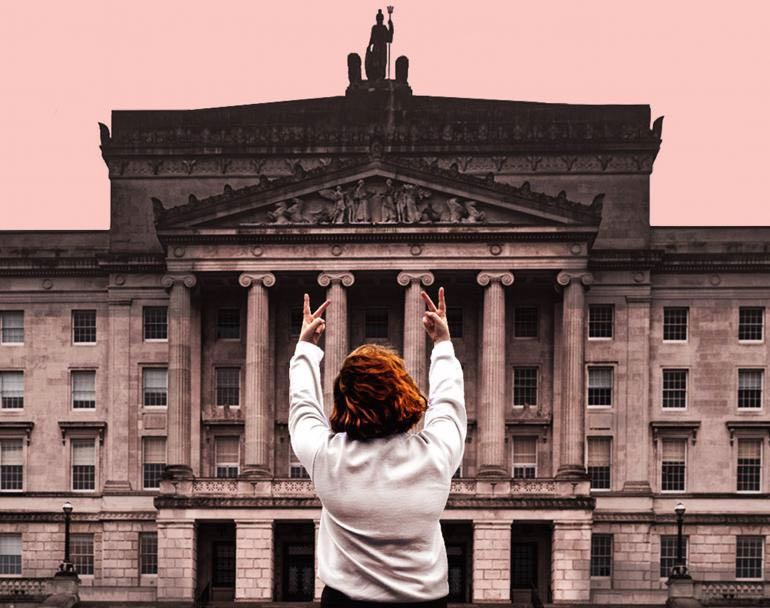 On September 11th, Seon Simpon and Gina Donnelly will debut their new play, Two Fingers Up, at the New Theatre as part of the Dublin Fringe Festival. The play is primarily based on female sexuality, which the two theatre-makers say is shrouded in shame in Northern Ireland.

They have been appalled by Northern Ireland’s sex education system ever since they were subjected to abstinence-only talks in secondary school, and they felt compelled to write the play in the aftermath of last year’s Ulster rugby trial, given the misogynistic attitudes they say it highlighted to them.

The pair believe that rape culture is fueled by abstinence-only, shame-centred sex education. Speaking to The University Times, Donnelly says they “talked about how we wanted to write something in response to the rugby rape trial. I was at a rally, one of the #IBelieveHer rallies for the Ulster rape trial, and I was talking to a girl there about the sex education she was receiving in her school at that time”. In Northern Ireland, almost 70 per cent of post-primary schools receive their sex education from a Christian organisation called Love for Life, and the organisation’s sex education programme is based on traditional Biblical teachings.

“One of [Love for Life’s] exercises is that they pass a piece of chocolate around a room full of teenagers, and then, at the end, it gets to the last person and they ask if that person would want to eat that piece of chocolate. It’s this idea that no one wants something that’s been around everyone. It just cultivates this horrible culture of shame.”

Simpson and Donnelly, in an attempt to tackle these issues, have created a play that “goes right back to the start”. Donnelly tells me: “We decided to go all the way back, basically. From P7, getting your first period talk, and how the boys aren’t included in that talk. It’s very hush hush, and it’s only the girls.”

The pair have opted for an accessible, comedic angle for their discussion of female sexuality: “People want to talk about consent in theatre but it seems a lot of it is voyeuristic. There’s a lot of rape being shown on stage, and we don’t think that’s helpful.”

Though Donnelly believes theatre-makers are attempting to start a conversation around consent, sexuality and shame, she recognises the traumatic impact that scenes of sexual assault can have on audience members: “What they’re actually putting on stage is so traumatising for anyone who’s been through that, for anyone who’s even been close to something like that.”

“We wanted to write something that was basically really funny and that, if people go and see it, they’re not going to feel traumatised. It doesn’t become voyeurism”.

She hopes that the play will have a positive impact on its audience’s attitudes, and on their sex lives: “If there are people out there who are having, not unconsensual, but unpleasant and unenjoyable sex with a partner or with multiple partners or whatever, that they can address that problem, and say that that’s not what it’s supposed to be like. It is supposed to be pleasurable for both parties.”

As someone who has been through Love for Life’s sex education programme, I feel extremely grateful to the creators of Two Fingers Up. If you didn’t get a decent sex education in school, it’s not too late: the play will run from September 11th to 14th and tickets are €15 or €13 for concessions.