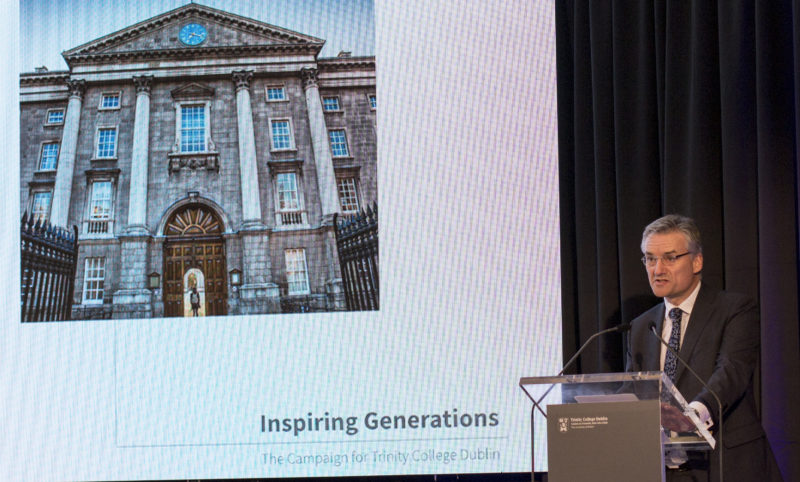 Internationalisation is a word we’ve been hearing more and more about recently, both in College and outside its walls. The dawn of social media has made the world a much smaller place by enabling us to connect with communities all over the world. Discussions of Brexit have, for many Irish people, brought into sharp focus the importance of international trade links and political alliances.

For students, the implementation of the Trinity Education Project promises a greater emphasis on internationalisation, in line with College’s ambition to hone graduate attributes. Provost Patrick Prendergast this summer embarked on a tour of Africa as part of the College’s Inspiring Generations philanthropic campaign, emphasising Trinity’s increasingly global alumni community, after a lavish project launch in the Exam Hall in May. More opportunities are being made available to students to study overseas under the Project, while our diverse student community is celebrated and increasingly being expanded.

The College’s Global Relations team has a large part to play in this. However, the recruitment of international students is multi-faceted and relies on a myriad of groups, based all over the world, to help prospective students take their first steps towards coming to Trinity.

The College has a team of dedicated recruitment officers who each represent a region and promote Trinity as a higher education destination to the area’s students. Ronan Hodson works as a regional officer for India and South Asia, and tells The University Times in an email that “I engage with prospective students at all stages – from first hearing about the university right up to registration”.

To assist in this function of promoting the College and liaising with students, Trinity has education agents stationed all over the world – including Azerbaijan, Russia, Tanzania and Botswana. They’re “a little like travel agents”, Hodson says, and they serve as a point of contact for students in far-flung locations who are tempted by what Trinity has to offer.

Declan Coogan, a recruitment manager with the Global Relations Office, tells The University Times in an email about “the unique resources agents can bring”. They assist “families with low levels of knowledge about overseas education systems” and add a face-to-face element to the recruitment process that cannot always be facilitated simply by the regional officers. Coogan says that “in many countries throughout the world and especially in Asia, Education Agents are often the preferred means for students to get information on study options abroad”.

Marie-Stella Hood is an education agent for Trinity based in Ghana. In an email to The University Times, she says her role includes “counselling prospective students to choose the right course, providing visa counselling, promoting scholarships and bursaries, arranging school visits and providing market intelligence to institutions”. She says that there’s been an “increase in student applications in recent years”.

Trinity has education agents stationed all over the world – including Azerbaijan, Russia, Tanzania and Botswana

Having this network of officers and agents has undoubtedly boosted international students’ awareness of Trinity, as well as their willingness to make the journey to study here. Hodson says: “This would not have happened organically – it takes a lot of work to raise awareness and establish the confidence needed for a student to travel across the globe to study.”

Through their dealings with students, educating them on Trinity’s merits and assisting them with their applications, the education agents and regional officers gain an invaluable insight into what exactly prompts students to leave their home countries and study in Dublin.

Hood says that “post-study work opportunities, academic excellence, moderate tuition fees and scholarships” are some of Trinity’s most attractive features to students in Ghana. Meanwhile, Hodson says that “in India, students care first and foremost about the employment opportunities following their degree”. Other enticing factors for students in this region include Dublin being seen as an excellent starting point for an international career and Ireland’s tolerant and friendly society. “Our rich club and society culture is not necessarily high on their agenda initially”, he says, “but when framed in terms of the lifelong skills they can cultivate, it helps”.

In the US, recruiters tend to go to Catholic schools, or bigger schools in those areas

This kind of information helps Trinity to tailor its approach when recruiting international students in various regions. Juliana Lynch, a fourth-year BESS student, bore witness to the College’s strategy for attracting American students when she was researching Trinity in high school.

To entice students to Dublin, the recruiters “really have to go into the American psychology”, she tells The University Times. Unlike in India and Africa, the academic excellence Trinity promises was not emphasised to US students. “Saying it’s the top university in Ireland means nothing over here”, Lynch says. “They have to get around that by promoting other areas of Trinity.”

A lot of the recruitment efforts focused in the US are directed towards cities with a strong Irish heritage, Lynch said, like Boston, New York and Chicago. “They aren’t going to go to some random public school in the middle of Wyoming. They tend to go to Catholic schools, or bigger schools in those areas.”

The recruitment strategy appears to have been successful, as “the US continues to be a source of many students at both undergraduate and postgraduate level given Trinity’s strong reputation and connections with Ireland”, Coogan says. “US students are attracted by the prospect of receiving an Ivy League-quality education at an affordable cost.”

In addition to maintaining the numbers of American students opting to study at Trinity, College has increased the amount of Indian and Chinese students significantly as a result of these recruitment methods. “We targeted India and China from the beginning”, Hodson said. “India and China now account for a large percentage of our non-EU students, whereas previously our numbers were very small.”

Hodson says that this success was bolstered by Trinity’s efforts to forge links with international universities, as well as the College’s global alumni network. “Those few trailblazers whom we recruited in the first years of Global Relations are now our most enthusiastic advocates and they are spreading awareness, increasingly rapidly, of what Trinity has to offer.”

Despite the success of the recruiters, though, there are certain obstacles can turn overseas students off Trinity. Hood says that the difficulty of securing a visa in time for term is sometimes a disadvantage for students, while Hodson calls the process “protracted and onerous”. “We, along with the whole higher education sector have been engaging constructively with the Department of Justice on the matter, and things are improving”, he says.

These difficulties, though, do not appear to be hindering the recruitment process too badly. Louise Staunton, Trinity’s International Student Experience and Global Officer Manager, tells The University Times in an email that, in 2018, 26 per cent of Trinity’s student community came from 118 countries around the world.

Coogan says this diversity “helps to fulfil Trinity’s mission of diversifying the student body. It allows all students to develop intercultural awareness to prepare them for life in a globalised world”.

Trinity has long been known for its progressive student community. In a period where world leaders are condemning whole races of people and anti-immigration rhetoric abounds, it is refreshing to know that Trinity is devoting huge time and resources to ensuring that our student community is as diverse as can be.

Of course, cynicism cannot entirely be removed from the equation – international students pay significantly higher fees and are a great source of revenue for the College. But Hodson says that “the purpose of a university is to bring people together from a variety of backgrounds to learn with and from each other. A university populated with students from the same background is fundamentally limited in what it can teach, and in its ability to prepare its graduates for the wider world”.