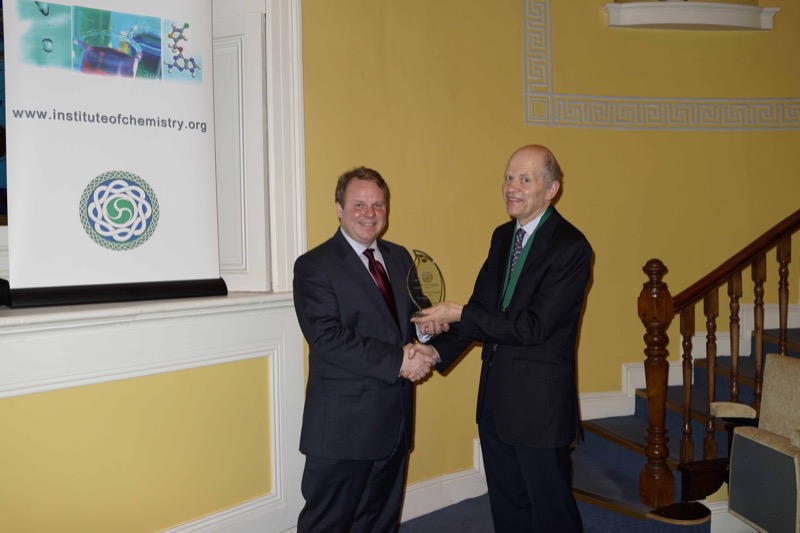 Prof Thorfinnur Gunnlaugsson receiving the Institute of Chemistry of Ireland's annual award for chemistry in 2015.

Trinity chemists have created a new self-assembling 2D material that could remove polluting and hazardous materials from the environment, a breakthrough that could help spur advancements in health and technology.

The new technology, whose lead author was Prof Thorfinnur Gunnlaugsson from the College’s School of Chemistry, could make it possible to remove polluting and hazardous materials from the environment, using negatively-charged atoms rather than positively-charged ones.

In a press statement, Prof Mick Morris, the director of the AMBER (Advanced Materials and Bio-Engineering Research) lab in Trinity, said that “the potential of this work cannot be undervalued”.

“It represents the work of many years and people in Professor Gunnlaugsson’s laboratory to evolve chemical methods to synthesise complex materials by design”, he said, “thus allowing them to be applied in many fields”.

This work”, he continued, “is an important part of our programme in AMBER, allowing the centre to tackle challenges we may once have found impossible.”

The technology can possibly be used in drug delivery, printing or gels. There is also a possibility for use in electronics as a way to increase battery life.

Gunnlaugsson added: “Trying to create a material that does exactly what you think it will – and what you need it to – in different environments is incredibly challenging because environments are rarely always stable.”

“It is something of a dark art”, he said, “but after a huge amount of work we have successfully created something that forms a controlled, hierarchical 2D network, and we are able to predict exactly how it will look in different environments”.

The research was a collaboration with researchers at the MacDiarmid Institute for Advanced Materials and Nanotechnology at the University of Canterbury, and supported by Science Foundation Ireland.

In March 2015, Gunnlaugsson won the Institute of Chemistry of Ireland’s annual award for chemistry.

Last week, a team of international researchers, including a Trinity scientist, made a major discovery in relation to a type of supernova – the “last hurrah” of light produced when stars explode at the end of their lives.

Dr Kate Maguire, an assistant professor in Trinity’s School of Physics, participated in a research initiative that has found that supernovae, rather than fizzling out after their final acts as was previously thought, can experience plateaus of up to a year in their light curves after death.