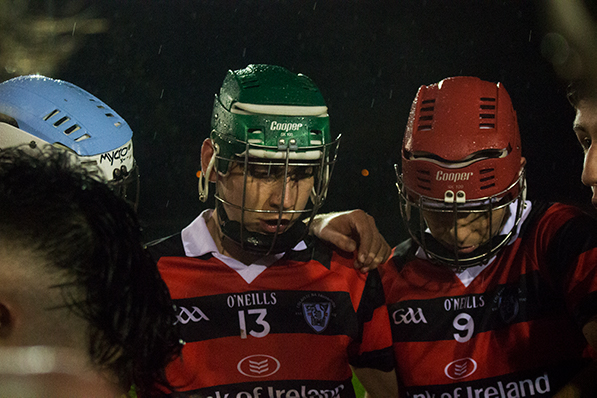 Trinity GAA’s hurlers fell to a heavy defeat last night in Santry, losing out to a strong University College Dublin (UCD) side by a scoreline of 3-23 to 0-13.

The defeat was their second in as many games in the Senior Hurling Division 1, and a lacklustre second-half performance was the undoing of the home side – UCD racked up two goals and 12 points in the second period with relative ease.

Trinity started brightly, contesting every ball in what was a frantic start to the tie. Donnacha Butler, wearing number nine for Trinity, looked to launch attacks early. Des Duggan, in the full-forward line for Trinity, slotted over a fine score early on and looked a serious threat from the get-go.

UCD, though, soon began to command the match. Solid fielding of the sliotar by defensive pair Matt Kenny and Ian O’Shea helped to start moves from deep, with Ronan Hayes causing problems for the Trinity defence in the half-forward line.

With both teams trading scores early on, UCD looked to push ahead. With 12 minutes on the clock, Seán Carey’s snapshot almost provided the first goal of the match, but his effort whistled wide of Jack Banks’s net.

UCD were holding a slight advantage, but Trinity began to make moves from deep, passing the ball with short punts up the field. Tomás Ahern was a constant scoring threat for the home side – picking up a pass by the side-line, the midfielder cut inside to slot over a fine point midway through the half, cutting the gap between the side to three points.

Trinity had a goal chance of their own as the first half headed towards its conclusion – a high ball towards the UCD goalmouth prompted a scrappy tussle over the sliotar. Despite having numbers around the penalty area, however, Trinity were unable to capitalise on the confusion.

After some classy build-up play, UCD had their first goal of the match close to half-time. Having threatened on several occasions earlier on in the tie, Luke McDwyer finally found the net after collecting a simple hand pass from teammate Carey.

With both sides exchanging a point a piece in the aftermath, UCD went into the break with a 1-11 to 0-8 advantage.

Despite trailing by six, Trinity had been competitive for the majority of the first period. Bringing a physicality befitting a Colours clash, the home side won a number of battles in midfield and converted some excellent scores from play.

However, two quickfire UCD goals early on in the second half sucked the intensity out of Trinity’s game – heads quickly dropped when McDwyer and Hayes both found the net.

Both Duggan and Ahern made attempts to rally their team, but their efforts only served to restore some pride for Trinity.

UCD continued to slot over scores without reprieve. Carey was virtually faultless with the dead ball, slotting over a number of second-half frees. The quality of the match dipped significantly as the away side pulled further away.

Carey could have been in for a goal of his own late on were it not for an excellent save from Banks in the Trinity goal, who parried the strike with his hurl.

Trinity did look to claw back some of the deficit. James Kenny put in a commendable performance in the half-back line, distributing the ball effectively. UCD’s defence was sharp until the end, however, and Trinity never really looked like threatening Conor O’Donoghue in the UCD goal.

Trinity will undoubtedly take positives from their first-half performance, having strung together a number of cohesive moves. With Ahern and Duggan looking sharp, there are reasons to be optimistic. However, their second-half collapse to a superior UCD side will be a cause for concern – management must tackle these issues if they are to mount a challenge in the winter league.

Trinity’s hurlers will face Technological University Dublin next week – they will make the short trip to Grangegorman as they continue to search for their first victory of the campaign.