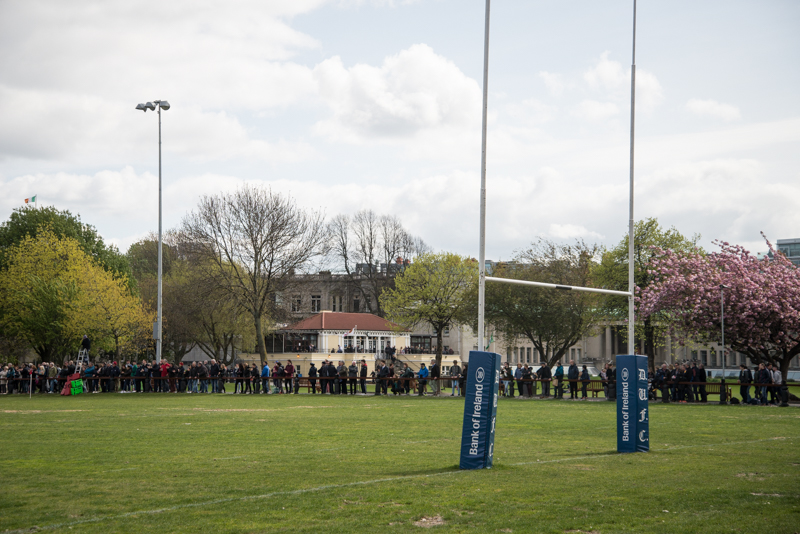 A James Fennelly penalty in the dying seconds of the tie was the difference between the teams, with Trinity coming out on top 12-9.

DUFC started the match under the lights in College Park with fervour. Clad in black and red, Tony Smeeth’s men were seemingly undeterred by the presence of two senior internationals in the Cambridge second row. James Horwill, the former captain of Australia, and Flip van der Merwe, an ex-Springboks lock, have 98 international caps between them.

Trinity’s flurry of early pressure resulted in a penalty within range early on. Fennelly stepped up to score his first three points of the night, splitting the posts confidently.

Cambridge looked to respond quickly, with a move within Trinity territory resulting in a penalty for the visitors. Out-half George Laing, however, failed at his first attempt on the dead ball.

Soon Trinity were in control again. Another infringement by the Cambridge defence allowed Fennelly to step up for his second penalty of the game, making it 6-0 after 12 minutes.

Looking to build on their lead, DUFC went in search of an opening try. A Fennelly kick from deep was collected skilfully by Hickey moving at speed. Dodging through the Cambridge defence, he offloaded to the oncoming Colm Hogan. But a rare error of judgement from Hogan allowed Cambridge to recover, as his mazy run failed to capitalise on the open space out wide.

Trinity came again, with some good work in the breakdown from Joe McCarthy leading to another scoring opportunity from the tee for Fennelly. He added his third of the night, the ball rattling the post on its way over.

The majority of Cambridge’s play came off their lineout routine. Captain Stephen Leonard was unplayable in the air, collecting numerous balls and laying off to the maul. The away side had their first score after winning a penalty in Trinity territory. Laing made sure of the kick on his second attempt from the tee, leaving it 9-3 at half-time.

After the restart, Cambridge enjoyed a period of sustained pressure. Some dogged defensive work from DUFC, however, namely from Mark Nicholson, scuppered Cambridge’s progress towards the tryline. But the visitors didn’t leave the danger zone empty-handed: Laing stepped up to dispatch another penalty after an infringement outside the Trinity 22.

Trinity tried to respond immediately, but some poor communication in their lineout gifted possession back to Cambridge. Moments later, Cambridge full-back Joey Gatus was over the tryline after a burst down the flank, but the referee called play back due to a foul in the buildup, saving Trinity from falling behind for the first time.

But Cambridge’s strength in the lineout breakdown continued to cause problems for the home side. A penalty won off a lineout presented Laing with the opportunity to level the match. He delivered, and his kick was met with enthusiastic cheering from the away bench.

A short restart from Trinity almost created the opportunity they’d been seeking all evening, but Billy O’Hora was unable to collect Hogan’s kick into the 22, and Cambridge survived.

As the game entered closing stages, Trinity enjoyed most of the possession, but stunted attempts to go forward frustrated the home side. Cambridge repeatedly collapsed the scrum in midfield, allowing Fennelly to kick for territory and move the play forward.

Cambridge held fast, guarding their tryline incessantly. With the clock in the red, a foul by the touchline presented Fennelly with a slim chance to clinch victory. As Fennelly lined up his kick, College Park fell silent and, from the tightest of angles, he coolly slotted over to make it 12-9. Referee Andrew Sheehan immediately blew for full-time, prompting jubilant DUFC celebrations.

Speaking to The University Times after the match, van der Merwe praised Fennelly’s ability to claim the win: “The boys done well. Great game tonight, great kick in the end to win the game.”

Speaking about his own foray into college rugby, he said: “It’s very nice to come back to the basics, and play some uni rugby.”

Last night’s victory is a welcome moral boost. Coupled with the team’s first victory in the All-Ireland League last weekend over Garryowen, DUFC will go into their away clash with Lansdowne FC next weekend with a new-found confidence.