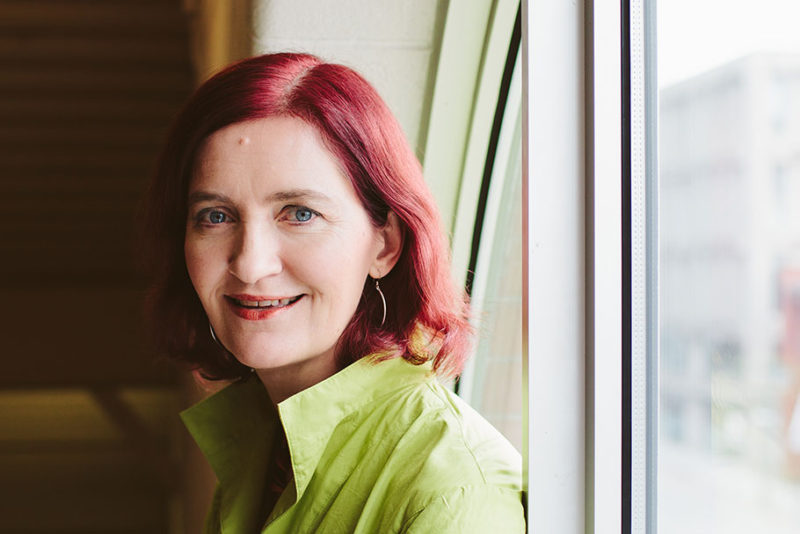 Charismatic, humorous, intelligent. These are the words that sprang to mind within seconds of hearing Emma Donoghue speak at last night’s UNESCO City of Literature event in Trinity’s Edmund Burke Theatre.

Donoghue is a woman who is not only an international bestselling author, but also obtained her PhD from the University of Cambridge, has been shortlisted for the Man Booker Prize and has received an Academy Award nomination for Best Adapted Screenplay. But you could just as easily talk to her about the weather as about the complexity of gender roles in 18th-century England. Donoghue was personable, open and tremendously likeable, and the hour-long event seemed no length at all.

The acclaimed Dublin-born author of Room attended a reading followed by a questions and answers session to promote her new novel, Akin. The story follows Noah, an 80-year-old retired professor living in New York’s Upper West Side who is, as Donoghue explained, “strong-armed by a persuasive social worker into taking on the temporary guardianship of his 11-year-old great nephew, Michael”. Michael, a Brooklyn boy with an incarcerated mother, accompanies Noah to Nice, Noah’s home, before being sent to America by his mother to escape the Nazis.

Donoghue said that although the story may resonate with modern readers in relation to the protagonists’ status as refugee children, the “echoes of different time periods” occurred naturally within the narrative, and she felt no need to “push contemporary parallels”.

This merging of the historical and modern world is also explored through the characters of Noah and Michael. Donoghue explained how linked to their relationship is the sense of panic felt by an older generation regarding the world in which the young live – a world of media technology, of “rival stories” and of a difficulty in deciphering the truth and determining an “agreed history”.

Donoghue was asked what she believes fiction’s role is in this modern world. She said that she “love[s] the way fiction muddies the water”. Fiction’s essential value is not in its ability to deliver a message – as Donoghue comically put it, “if [she] had a message for the world [she] would put it out on Twitter” – but rather in its potential to break down barriers. Donoghue suggested that by simply uniting two fundamentally different characters and letting them speak to one another, “the distinction between them, which seems so firm at first, starts to fall apart”.

The idea that fiction prompts the dissolution of stereotypes by soliciting empathy for its characters underlines its vital importance in contemporary society.

One of fiction’s greatest assets, according to Donoghue, is that it is “delightfully free” of the strict time restraints necessary in film. As a student of English and film, I was particularly interested in Donoghue’s perspective on the adaptation of fiction for the screen. Although she remarked upon how screen adaptations often demand the “whittling down” of material, the overriding impression Donoghue gave was one of excitement regarding the transcendence of stories across mediums.

The presumption, however misguided, is often that film and television is regarded by writers as an inferior storytelling medium, but Donoghue rejected this idea, saying that she was “enthusiastic about the ways in which a work changes” rather than how much she can “protect [her] work”.

My evening with Emma Donoghue was highly entertaining and thoroughly thought-provoking. She is an inspiring woman in many ways, not just for her professional accolades and literary accomplishments, but also because of her candid attitude and charming persona. My signed copy of Room, marked with “warm wishes, from Emma Donoghue” will hold an esteemed place on my bookshelf for years to come.