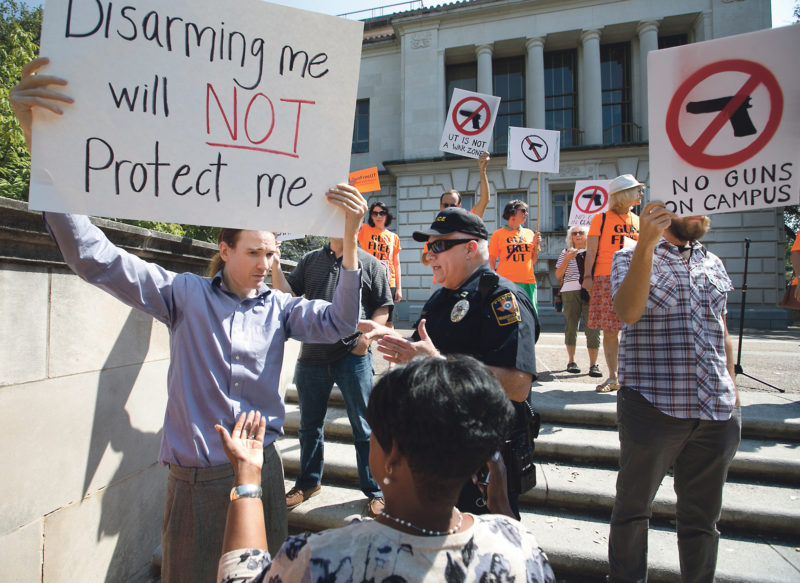 Any student about to start college will know the fear that comes from entering into the unknown: not knowing people, living independently for the first time, adapting to a new way of learning. This is all without a factor that most students will never have to worry about: guns on campus.

In Ireland, where guns are illegal for the vast majority of the population (minus the defence and police force and those with a license to carry a single shooting or hunting rifle), we do not have to give this a second thought.

Students in the US are not so fortunate – or they’re luckier, depending on your point of view.

Originally, students in the US were banned from carrying guns on university campuses thanks to laws dating back to 1824. But this all changed in 2004, when Utah’s state legislature passed a law that stripped public colleges of the authority to establish their own policies about firearms. Since then, the gun law landscape of American universities has radically changed.

“Campus carry”, the term used to describe the possession of firearms on college campuses in the US, is decided at state level, with each state having discretion on laws about the bearing of arms. Currently, according to these laws, 16 states ban the carrying of concealed weapons (the practice of carrying a gun in public in a concealed or hidden manner) on campuses, including California, Florida, Massachusetts and Nebraska; 23 states let the university decide, such as Alabama, Connecticut, Maine and Virginia; and 10 states allow the carrying of concealed weapons on all campuses, including Arkansas, Texas, Kansas and Idaho.

The University of Texas, Austin stands as perhaps the strongest example of a pro-gun campus in America, having legalised campus carry in 2016. Not only does the legalisation allow guns on campus, it even permits them inside buildings. In fact, professors at Austin are banned from posting signs indicating that guns are not allowed in the classroom.

But some say that more lenient gun laws result in higher rates of shootings. And these can happen in more than one way. In 2014, a professor in Idaho State University shot himself in the foot during class when his gun fell out of his pocket – barely two months after campus carry was legalised in the university. But shootings can also occur in a darker – and more lethal – form, in the shape of intentional shootings and even killing sprees. On April 16th, 2007, Virginia Polytechnic Institute and State University was visited by deadly violence, when a student of the college opened fire with a gun he had legally purchased. He killed 33 staff and students, and injured 17 more.

Perhaps unsurprisingly, the event proved to be the final straw for many, creating a major schism between people pushing for stricter campus gun laws and those working in the opposite direction. Strangely, the shooting arguably birthed a nationwide campaign for campus carry.

Students for Concealed Carry, a national student-run organisation with more than 40,000 members including students, professors and parents of college students, is one such movement.

The body, considered the most knowledgeable group on campus concealed carry in the US, has “chapters” in every state. These groups lobby for campus carry to be legalised by states, rather than individual universities. They also hold regular talks and protests – including “empty holster protests”, where students wear an empty holster to symbolise their belief that “disarming all law-abiding citizens creates a defence-free zone which are attractive targets for criminals”.

Mike Newbern is the assistant director of public relations for Students for Concealed Carry, and the director of its Ohio branch. He tells The University Times, in an interview that quickly becomes heated, that every American citizen has the “fundamental human right to bear arms”. Newbern believes this principle should extend to university campuses, to allow students to “defend themselves against those who want to harm them”.

This, it becomes clear, is the movement’s underlying principle. Newbern suggests that Ireland could benefit from America’s gun laws: “There are people right now walking outside on the streets of Ireland carrying guns, you just don’t know it. And you don’t have a way to protect yourselves.”

But do guns protect students – or endanger them?

Stephen Boss, a professor of environmental dynamics and sustainability at the University of Arkansas, is well-qualified to address this question – he wrote a book about it earlier this year.

Boss, whose book is entitled Guns and College Homicide: The Case to Prohibit Firearms on Campus, argues that universities should restrict campus carrying – and that US society as a whole would be safer if it imitated this approach. This, it’s not a surprise to hear, doesn’t make him very popular with gun rights groups.

Speaking to The University Times over email, Boss says that “in general in the U.S., advocates for ‘guns on campus’ laws openly lie about safety and security on college campuses and distort public perceptions in an attempt to pass their agenda”.

Even more alarmingly, Boss learned during his research that “homicides in general on college campuses are almost all targeted killings”, making it much harder to profile a mass shooter. This finding also appears to trump the greatest argument of many campus carry activists: that carrying guns on campus helps students defend themselves from outside forces seeking to do them harm. By Boss’s logic, campus carry doesn’t protect students from outsiders – it puts them at risk from their peers.

And Newbern, in a perverse sort of way, fully agrees with this sentiment. He says that students with access to firearms are “experienced students who are lawfully licensed”, so their fellow students don’t have to worry: they’re in “safe hands”.

But Newbern’s argument misses the fact that many students are firmly against campus carry. One, Kelly Orr, a second-year student in Case Western Reserve University in Ohio, tells The University Times that “I personally dislike lenient concealed carry and gun purchasing laws as I believe not everyone should have a gun”. Orr believes that “allowing greater access to firearms across the board means that many individuals who should not have weapons will have access to them”.

It’s not hard to see why Orr believes what she does. In the week before our call, her campus had two gun-related incidents: an armed robbery and a bouncer at a college party carrying a concealed weapon in the presence of many students.

But Orr isn’t alone in fearing the effects of campus carry. Brycen Aldrich, a student at Brigham Young University in Utah, says that “the idea of people walking around with guns on campus concerns me”. Living in Utah, a state that is largely in favour of campus carry, Brycen knows guns are a constant presence, even if he doesn’t consider the scary fact all the time.

Guns, in the eyes of these students and many others, pose a risk to the status of universities as havens of learning, exploration and discovery. For some, it’s simply a fundamental right. But Boss’s chilling conclusion sums up how many feel about the situation: “Eventually, someone I know will be a victim. I don’t enjoy being the custodian of that knowledge.”