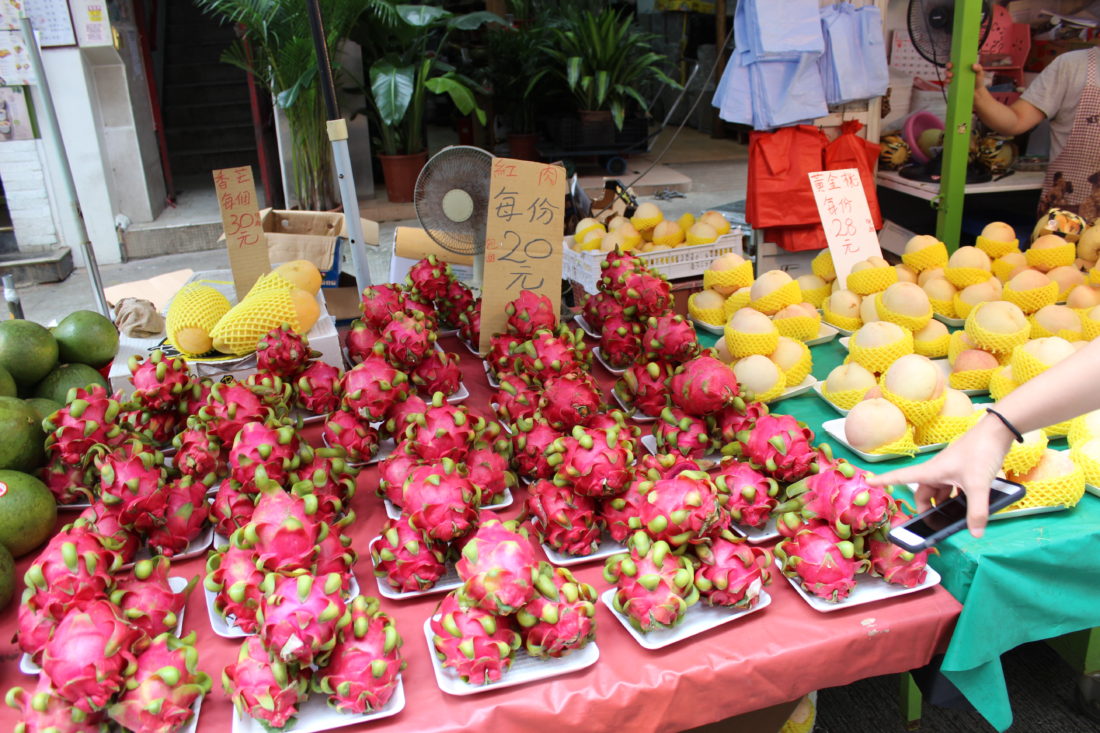 Katy Amos spends a summer at home in Hong Kong attempting to relearn its ways. Her plan of action: food.

Here in Ireland, I am regularly asked where I’m from and the truth is, while I tell people here that I am from Hong Kong, when I do go home to Hong Kong I feel like a bit of a fraud. Three years at university in Dublin have not made me Irish, but they have definitely made me less of a – and this is official slang, and so a marker of at least some authenticity – “Hongkonger”.

You’ll be relieved to hear that this article is not an attempt to work out my identity issues. What you’ll find instead is one Hongkonger’s attempt to figure out what it means to talk about Hong Kong as a place today. Place is about so much more than physicality: being a local is about really knowing somewhere, passing through the streets and feeling at home.

But Hong Kong is a place of relentless flux. We complain, with some justification, about Dublin’s cranes, but having lived in both cities the rate of change in Hong Kong is on another level.

Hong Kong is a city with a property market that makes Dublin’s look positively egalitarian. In Hong Kong, the retail and restaurant industries are brutal. The city may number 7.4 million people, but competition there is limitless: it simply can’t be measured. The same shop front can go from a luxury watch shop to a concept fashion store to a faddish bubble tea store – all within the space of a single year.

For me, these are relatively recent revelations: having lived in Hong Kong for my entire childhood, I just didn’t realise that the city’s rate of change was abnormal. When you live there and you’re accustomed to the manic pace, you can almost keep up.

But when you go off to university in another continent, and venture home only twice a year, the city when you return has changed so dramatically that you feel as though you’ve been left behind. When I had to pull out Google Maps last Christmas in what would have been my most familiar district, the foreignness that had been slowly building up over two and a half years started to truly hit home.

This past summer, I made a conscious effort to relearn the wily ways of the city I proudly call my home. I went back for the longest period of my university life yet: a full two months. I worked in a local Hong Kong company and made the very most of my lunch breaks and weekends in an attempt to get to know my city once again.

I knew it was pointless to try and commit Hong Kong’s streets and landmarks to memory. In a place so characterised by the pace of physical change, I had to find something less ephemeral, more truly anchored in the place.

My plan of action: food. This was, of course, partly a lazy excuse (my mediocre Cantonese could do with a polish) but there really is no more accessible way to participate in a culture than to dive into its cuisine. And let me tell you, in Hong Kong – well, what a cuisine it is.

What struck me as most different from the culture back in Ireland was that people in Hong Kong eat out far more frequently than their Irish counterparts. That’s not to say that home cooking is neglected or considered inferior (some of the most important annual festivals are often celebrated at home) but it is common practice for many people to eat out for even the most casual of meals almost every day.

Take breakfast, for instance. In Hong Kong, breakfast food is a culinary tradition in itself. A Hong Kong breakfast, while clearly influenced by the city’s colonial past, is a singular phenomenon in so many ways. Classic Hong Kong-style French toast includes the addition of sweetened condensed milk, while macaroni is served swimming in a Chinese-style broth with ham.

Classic Hong Kong-style French toast includes the addition of sweetened condensed milk, while macaroni is served swimming in a Chinese-style broth with ham

Meanwhile, at cha chaan tengs (tea restaurants), Hong Kong milk tea (yeet lai cha) is brewed by the gallon in a highly precise process that is culturally protected. While the practice of adding milk to tea was undoubtedly a British influence, Hong Kong people made it their own by creating a tea with a distinct ritual. Loose-leaf tea (made up of at least four types of tea leaves) is drawn through a silk stocking four times to amp up its flavour and colour, and regular milk is replaced with a dash of evaporated milk. The first time I swapped out my lunchtime coffee with a Hong Kong milk tea I had the jitters for the rest of the afternoon – it packs a delightful punch.

But the most important Hong Kong tradition has to be the weekly ceremony of going to yum cha with your family. Growing up, I often evaded the Sunday dim sum ritual, preferring a lie-in to the task of translating the well-meaning pleasantries exchanged by my English father and Chinese grandmother. This summer, though, I went all in.

I moved beyond my conservative taste for barbecue pork buns and shrimp dumplings, venturing into the unknown realms of tripe, bean curd rolls, taro root and stuffed eggplant. I loved it all. Sitting around a circular table with my extended Chinese family is so characteristic of home for me that I am only slightly embarrassed to admit that I inexplicably burst into emotional tears at the family table one day this summer (in full view of my bemused younger cousins, I might add). Thankfully, the familiar cacophony of exuberant, shouted Cantonese in the dim sum hall drowned out my little outburst. Truly, there is nothing like spinning a bamboo steamer basket full of buns around the table to make you feel part of a community. 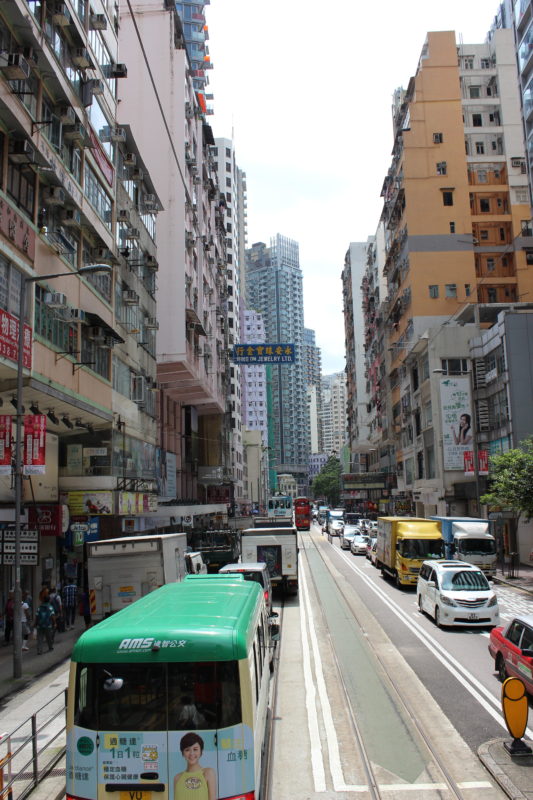 Hong Kong is a city in relentless transition.
Niamh Murphy

But Hong Kong isn’t all tradition, ritual and authenticity, nor is it simply a place you can travel to in the expectation of confirming a vision of the primordial “Asia” that the West likes to believe in. It is as much the home of the pointless fad and the tacky trend as the West is, especially in the realm of food. From cat cafes to matcha-everything, Hong Kong food trends are no laughing matter. You don’t have to be very hip or in the know to discover what the latest craze is. Instead, simply follow the queues.

This summer I decided to join in on the fad du jour (a little late, I must add): cheese foam tea.

I know cheese foam doesn’t sound particularly nice in any context, but believe it or not, for the last year or so, people have been waiting for up to an hour to get their hands on an ice-cold tea topped with a layer, a few centimetres thick, of aerated cheese.

Inspired by my newfound spirit of adventure (or my pathetic longing to belong), I ordered a jasmine tea one day, and at the very last minute requested cheese foam for an extra 40 cent. Don’t get me wrong, I am a cheese fanatic. But the first sip shattered my hopes that the salty tang of cheese would complement the sweet jasmine tea in a similar way to figs and brie or, say, pear and Cashel Blue. What hit my palate instead can only be described as unadulterated cheese single. In bubble form. I had to order a plain bubble tea to quell the deep disappointment that lingered on my tastebuds, but I left with the satisfaction of having finally jumped on the bandwagon.

Ultimately, it would be a stretch too far to claim that going home for a few months and making more of an effort to explore the nuances of Cantonese cuisine induced any earth-shattering revelation about Hong Kong today, and about what it means to be Hongkonger. It is, after all, the place where I grew up, and it is impossible to become entirely unfamiliar with the place that is ultimately home.

That said, as I prepare to enter my last year at college here in Ireland, I feel more confident in my identity as a Hongkonger than I have in years. Food has allowed me to rediscover and reconnect with my heritage. Admittedly, there’s a lot more to Hong Kong than just food, but for any intrepid traveller wanting to get a true sense of the city, there’s no better place to start.