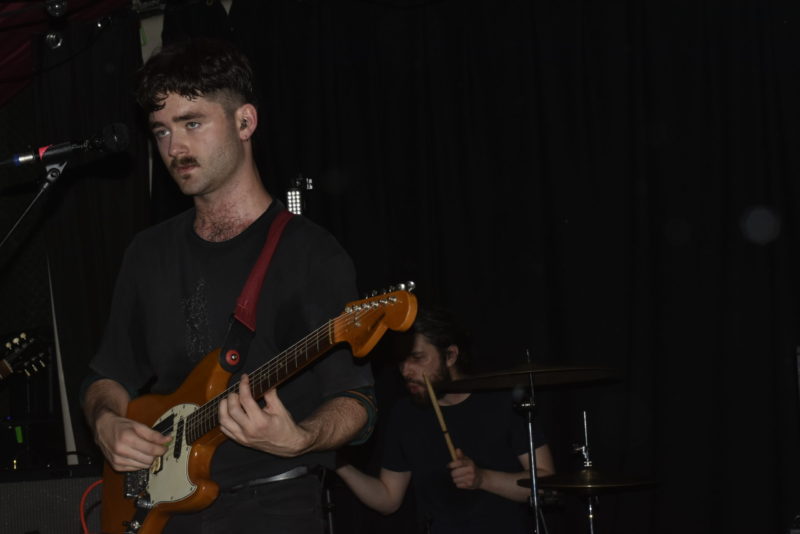 Joe Coughlan for The University Times

“Waking up is easy – I can do it in my sleep”, declares Oisín Leahy-Furlong, the lead singer of Thumper, to the devoted masses of the Grand Social loft, as the ensemble transition into “25”. The song was recently recorded in RTÉ’s Studio 8, and addresses the mundane routine and lack of ambition attributed to the modern young adults of Dublin. Amid the aural frenzy, the secluded space proves to be the ideal venue for a rock group such as Thumper.

The promise of the long-awaited homecoming show in question has attracted an impressive crowd, eager to experience the wall of sonic death before the group jet off for another European tour.

The freshly released track signals the first of many mosh pits for the gig, with Leahy-Furlong briefly infiltrating the crowd. The intimate format of the Grand Social allows Furlong to interact with the audience and return to his fellow bandmates with ease. Thumper, who sport a larger line-up than the typical rock group, manage to maintain their tight rhythm section to accommodate the fuzz-driven anarchy of the guitars. The inclusion of two drummers allows for additional toms or hi-hats in the intense build up sections, and adds to a much denser overall sound to accompany the heavy blockade of palpitating feedback.

Thumper show off an abundance of new material, but still make time to incorporate the early tracks their loyal fans know them for. The soliloquy-like bridge of “Fear of Art” and the iconic riff of “The Bathroom Floor” see a sickening glow of green light cleave the incessant strobes. It’s at this point that Thumper’s guitar work really comes into its own, with the live performances totally eclipsing the recorded versions. The tracks were conceived in the band’s lo-fi period of recordings, sometimes consisting of little more than Furlong, his guitar and a microphone on his computer.

Aside from the auditory bedlam, it’s evident that the crowd are enthralled by the band. Any awkwardness present in the room is immediately obliterated by the order of a wall of death by guitarist Alan Dooley. “I am a loser baby – lose yourself with me”, orders Furlong, with the crowd obeying hereditarily. Thumper know how to keep the audience engaged, diving straight into live behemoth “In My Room” before the chaos created by “The Loser” can dissipate.

“(You’re Bringing Me) Down”, a breakthrough single for the band, has the audience by the throat. The flange of the guitar pulsates through the room as Furlong returns to the audience yet again. However, any earlier hesitation from both parties has entirely dissipated. The singer merges into the crowd seamlessly as technicians struggle to feed the microphone lead into the mob, as photographers desperately clamber over each other in an attempt to capture the spectacle. Prior to the track’s final chorus, the entire upstairs loft is rife with squatting fanatics, itching for the song’s drop.

After all the contagious melodies, blistering guitar riffs and stage-diving antics, it’s easy to forget that Thumper are still in many ways a local band of Dublin city. At the conclusion of their set, the sweat-soaked sextet meekly retire from the stage and join the crowd. Thumper are a band that make you feel lucky to still see them in this early, primal form. At the rate they’re going, the days when they can say the Grand Social is their biggest gig are numbered.