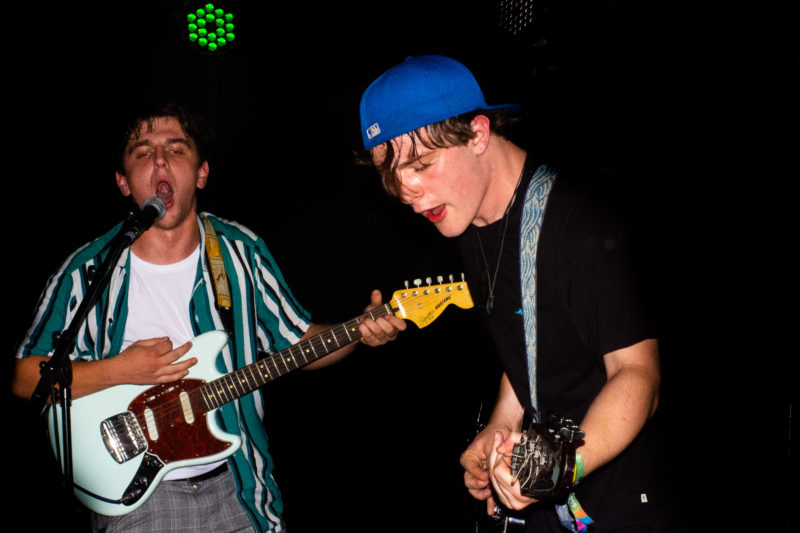 Joe Coughlan for The University Times

With a name derived from an obscure Simpson’s reference, Chinese Newspaper have gained a name for themselves through their exuberant sound and steady appearances in venues such as Whelan’s. Rooted originally in Meath, the group are now more widely known as a Dublin-based band due to their frequent gigging in the capital. I recently met with the group to discuss the release of their sophomore EP, Late Night Pharmacy.

The group unanimously sing the praises of the EP’s producer, Liam Mulvaney. As summarised by drummer Nathan Merriman: “I learned more in those three days than I did in four years of BIMM.” It was the first time the trio had ever included a producer in the recording process. Mulvaney had worked previously with Merriman’s father, which led to the eventual collaboration for Late Night Pharmacy. Mulvaney has also been credited with working with Girl Band on their last two releases.

Chinese Newspaper describe themselves as a band with elements of punk, and their previous tracks have generally resembled a sugar rush consisting of fuzz-driven catchy riffs. The latest EP sees the band refining their sound more. “I think it’s by far our best work to date. It’s way more fleshed out, with more actual songs”, says Merriman. The latter half of the release also depicts a more sombre tone employed by the band, as guitarist and vocalist Killian Barrett details: “The song I’m most excited for people to hear is “Nothing Comes From Nothing””, he says. “It was debatable whether it was actually going to be on the EP. Liam brought that song alive. It’s very different to everything else we have.” Merriman chimes in: “I came into the studio hating that song and came out really liking it.”

Late Night Pharmacy is also the band’s first studio recording with bassist Aran McGillick. Childhood friends Barrett and Merriman met McGillick at BIMM, the music college on Francis St. The eight colleges, spread across the UK and Ireland, have had ties to some of the biggest artists in both Dublin and the wider music scene, from homegrown heroes such as Thumper and The Murder Capital to larger acts, among them the likes of George Ezra and James Bay. We touch upon the extent of the influence that the college has on the developing musicians they facilitate.

“You get as much out of BIMM as you put into BIMM. You’re not just going to fall into a band. You don’t just walk up every day, go to class and get handed a load of shows”, Merriman remarks. The trio mention the networking opportunities it affords, with the notion of friendly competition through the large emphasis on live performances in front of fellow students. “It’s an amazing talent hub. People come in and by the time they’re in third or fourth year they’re exquisite musicians”, describes McGillick. “In the space of two months, that person who you originally thought wasn’t that good is suddenly way faster than you.”

The video for “Sunday”, the lead single off of Late Night Pharmacy, features the band performing at the Summer in the City Festival in Waterford, followed by their night-time gallivanting in the historic town while waiting for their bus back to Dublin. “We had four hours to kill in Waterford, so with a bag of cans and a VHS camera off we went”, Merriman reveals.

The video was filmed with a Panasonic NVRX camcorder, alluding to the authentic, vintage aesthetic of the music video. Merriman admits that this was done in light of the lo-fi style that the band is sonically known for: “I think that song has a weird nostalgic feel, something about it makes me think of the times that never happened.” Spliced into the video alongside the band is footage of retro cartoons and the beachside getaway of a mysterious couple. Merriman explains: “The dude who recorded it for us, Luke De Brun, ordered a load of the tapes online for it. By chance, it came with a load of footage of this random couple from the nineties.” This complemented the eclectic nature of the quick cuts in the video’s finale, so the clips were retained.

Through their latest release, Chinese Newspaper have revealed they are capable of more than their punk roots, while also solidifying their position as one of Dublin’s more formidable upcoming rock groups. Stay tuned for more from the fuzz-pop trio.