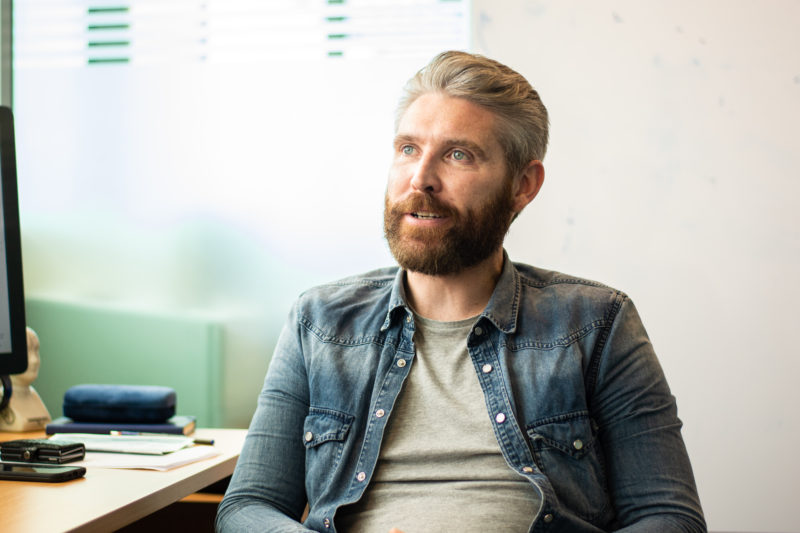 Dr Jerrard Hayes, an assistant professor and the director of Trinity’s master’s in immunotherapeutics.
Alex Connolly for The University Times

The complexity of cancer has long made the hunt for new therapies a challenge. Experts from a broad cross-section of related and unrelated medical fields, however, have united to unravel this challenging health problem, enabling the development of new therapeutics to minimise or inhibit cancer cell proliferation and prolong patient’s lives.

One of the most recent advances in cancer research is the development of immunotherapy.

More than a century old, immunotherapy was the first non-surgical treatment for cancer. It dates back to William Coley, an immunotherapy pioneer who is now considered the father of cancer immunotherapy. Coley developed an early form of immunotherapy using infectious agents that resulted in spontaneous regression of cancer. Cancer immunotherapy has become one of the hottest areas in oncology since it was first described in 1985, and was labelled in 2013 as “breakthrough of the year” by the journal Science.

Immunotherapy exploits the power of the human immune system to treat diseases including cancer. The immune system detects cancer by recognising protein molecules known as antigens that are uniquely expressed in cancer cells. Prof Cliona O’Farrelly, the chair of comparative immunology, says: “Immunotherapies are treatments that change the immune system and there are several types, some that boost the immune system and others that suppress it, for example, in inflammatory and autoimmune disease.”

Dr Margaret Dunne, a research assistant professor and principal investigator at the Trinity Translational Medicine Institute, tells me in an email that “traditional therapies such as chemotherapy and radiotherapy aim to destroy tumour cells; however, they are not particularly tumour specific, whereas the goal of immunotherapy is to activate an immune response against cancer”.

Immunotherapy is really changing how we think about cancer

However, this is tricky, says Dunne, given how complex the immune system is – not to mention how complex tumours can be. Dunne is responsible for having recently identified lesser-known immune cells called MAIT (mucosal-associated invariant T cell) cells that are capable of destroying malignant cells.

Dunne explains how scientists for years were puzzled by the failure of the immune system to respond to cancer, but they now know that cancer can hide from T-cells that seek out and kill invaders: “Up until now, we thought that some tumours were invisible to the immune system, or that the immune response was somehow deficient, allowing tumour survival, but now we know that these processes are reversible.”

Interestingly, the Nobel prize winners (2018) James Allison and Tasuku Honjo have “fundamentally changed the way we view how cancer can be managed”. Their discovery presents a new principle – rather than targeting the cancer cells, proteins found on immune cells, which operated as brakes preventing the body’s natural defences from killing cancer cells, are targeted to release the brakes, thereby unleashing the immune cells to attack cancer cells. These proteins are called PD-1 (programmed cell death protein 1) and CTLA-4 (Cytotoxic T- lymphocyte-associated protein 4) and are collectively termed as checkpoint proteins.

Dr Jerrard Hayes, an assistant professor in Trinity and the director of Trinity’s master’s in immunotherapeutics, says that “monoclonal antibodies have remarkable success in the treatment of blood borne cancer such as non Hodgkin’s lymphomas and b-cell malignancies by recognising and identifying antigens on the surface and then designing antibodies against those antigens and then engaging the immune system, usually by natural killer cells”.

Twenty per cent of patients respond to immunotherapy and the big question we’re trying to answer is: why doesn’t everyone respond?

“There are also non responders, and a lot of these antibody therapies are not 100 per cent effective, so herceptin for example can only treat 20 per cent of HER-2 positive metastatic breast cancer, but nonetheless they had a remarkable success in treating cancer.”

Adoptive cell therapy is a treatment that uses immune cells taken from a tumour and engineers them to be more capable of targeting and destroying cancer cells. One type of adoptive cell therapy is chimeric antigen receptor T cells (CAR-T cells). Cancer vaccine, says O’Farrelly, “is about finding tumour antigens, and stimulating a specific adaptive cytotoxic immune response”.

Following such extensive research into the area, the most important – and obvious – question left to ask is: how effective is immunotherapy on cancer treatment? The answer, Dunne says, is not a straightforward one: “To begin with, 20 per cent of patients respond to immunotherapy and the big question we’re trying to answer is: why doesn’t everyone respond?”

Regardless of the outcome of immunotherapy, patients are still at risk of suffering side effects. As well as the general risk of contracting fever and nausea, says Dr Kingston Mills, professor of experimental immunology in Trinity’s School of Biochemistry and Immunology, in the case of immune checkpoint inhibitors, the main side effect is the development of immune mediated diseases such as autoimmune disease.

Mills explains that this occurs because you are “allowing the immune system to be uncontrolled, and an uncontrolled immune system can result in immune response attacking itself and that’s what autoimmunity is. So, it’s not surprising that patients treated with immune checkpoint inhibitors will develop autoimmune disease such as colitis, a type of gut inflammation”.

Despite the lack of certainty concerning its effectiveness and the possibility of side effects, Hayes insists that the future looks bright and exciting for the field of cancer immunotherapy. With hundreds of immunotherapies in clinical trials and research testing of immunotherapy combined with standard treatment well underway, Dunne can only agree: “The future holds a lot of promise, but there is still a lot for us to learn.”