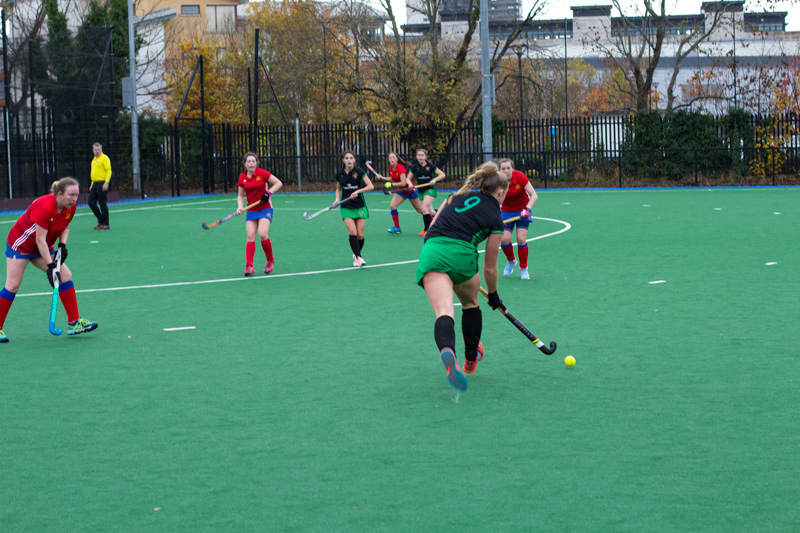 Dublin University Ladies Hockey Club (DULHC) fell to the first defeat of their EYHL 2 campaign to Corinthians Hockey Club today, losing out 2-0 on a bitterly cold afternoon in Santry.

Despite contained periods of pressure in the third and fourth quarter, DULHC struggled to threaten the visitors all afternoon, and in the end were beaten by the better side.

Corinthians set the pace early: Nicola Torrans and Jodie Douglas combined to put pressure on the home side. Corinthians’s Lynn Pomeroy launched an attack, breaking into the Trinity penalty circle in an attempt to create an opening. Trinity’s defence managed to soak up the early offensive moves.

After being pinned back in the opening phases, Trinity began to build their own moves. Rachel Burns and Kate Orr were at the centre of the action as DULHC moved the play towards the Corinthians end. Orr got a shot off following some good play, but it was deflected wide.

The quality of play in the first quarter suffered after the opening attacking plays – the flow of the match was disjointed, with both sides struggling to move the ball into the final third.

Trinity’s Sarah Whelan and Leigh Pelow for Corinthians had snapshots saved, but ultimately the first period came to a close with neither team really threatening.

In the second quarter, it was Corinthians again who dictated the early exchanges. Iseult Cambay in the Trinity goal made a save right after the restart to keep the scores level.
Corinthians came again – a shot from inside the penalty circle had beaten Cambay, but Tessa May was on hand to clear off the line.

Having survived the Corinthians storm, Trinity looked to gain a foothold. Sarah Whelan won a free outside of the penalty circle. DULHC looked to contain the play in Corinthians’ half, but the away side were sharp in defence and cleared the danger.

The play shifted back to the Trinity end, and Corinthians committed bodies forward looking for the first score. After a quickly taken free, the ball zipped through the penalty circle. Corinthians captain Lauren McGrane was able to get her stick to the ball to guide it past Cambay, putting her side deservedly ahead.

The second quarter continued in the same vein – Corinthians controlled the match, launching several attacking moves in an attempt to stretch the lead. Excluding one shot from range by Sally Campbell, Trinity failed to threaten the away side.

The third quarter saw DULHC grow steadily into the match. Both sides traded possession in the opening minutes of the quarter, before Trinity began to press the Corinthians defence. Burns won a penalty corner for the home side: the resulting shot on goal was blocked down effectively, but a second penalty corner gave the home side another opportunity. This time, Erica Markey got a shot on target, but her strike was parried and cleared.

Trinity’s Campbell was at the centre of much of the play in the quarter – acting as a key playmaker in midfield, she made several pivotal passes as Trinity searched for an equaliser. Unfortunately for the home side, they failed to find the final shot once they were in on goal.

The fourth quarter began with Corinthians pressing high. Cilia Holdermann won a penalty corner for the away side as they looked to finish off the tie. Jess McGrane had two shots off the set piece – one was blocked, before she skied her subsequent strike over the bar.

Trinity tried desperately to build an attack and stunt the away side’s advances. Markey looked to rally her team with some good forward play, but the attacks were futile.

With only minutes remaining, Ciara Vincent killed off the match. Reaching the ball after a cross into the Trinity penalty circle, she doubled the away side’s lead with a deft flick.

Trinity went in search of a consolation with the clock running down, but despite the best efforts of Leah Paul and Campbell, they were unable to break down the Corinthians defence. The final score read 2-0 when the umpire ended the game.

This is the first defeat of the EYHL 2 competition for the Trinity side. With games remaining against NUI Galway and Cork Church of Ireland, DULHC will be looking to channel their form in the Leinster League in their remaining games.