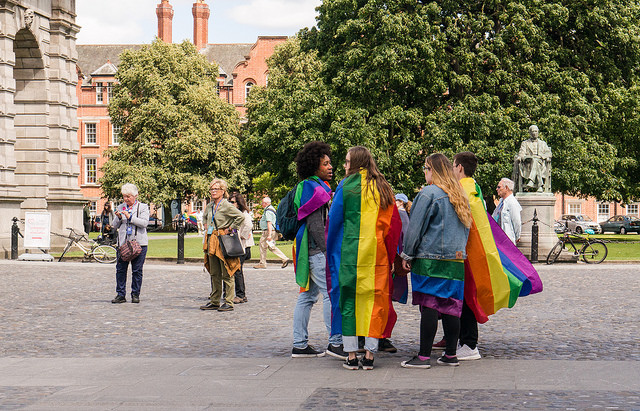 This week is Trinity College Dublin Students’ Union’s (TCDSU) annual Rainbow Week – the week in which it collaborates with College societies to raise awareness about the issues facing the LGBTQ+ community on campus. To commemorate this, Trinity’s societies have put together a jam-packed week of panel discussions and social outings. With a number of guest speakers visiting Trinity this week, there is something for everyone.

Monday
At 6pm, Trinity Free Legal Advice Centre (FLAC) welcomes amateur historian Catherine Corless, whose research brought about the discovery of a mass infant burial site beneath the Bon Secours Mother and Baby Home in Tuam, Co Galway. Corless will receive the society’s Advocacy Award in recognition of her work in pursuing social justice in Ireland. The talk will take place at 6pm in the Global Room.

If you studied Irish in school, you will likely have watched “Yu Ming is Ainm Dom”, the 2003 short film about the struggles of a young Chinese man who moves to Ireland to learn Irish. Diyu Wu, who played Yu Ming in the film, will speak in Seomra na Gaeilge about his experience of being involved in the film and in the Irish language community as a whole. The talk will begin at 6.30pm and will be followed by a game of table tennis in acknowledgement of the actor’s former role as captain of Trinity Table Tennis Club.

Tuesday
Tangent will play host to a panel discussion hosted by Trinity General Science Society (SciSoc) in collaboration with Trinity Entrepreneurial Society (TES). Starting at 6pm in the Tangent Workplace in the Business School, “From STEM to Startup” will see a number of guest speakers discussing how a STEM degree can be used to set up a successful business.

As part of Rainbow Week, Trinity Q Soc will collaborate with Trinity Clinical Therapies Society and Trinity Nursing and Midwifery Society (DUNMS) for a workshop on the prevention and management of HIV. Using a lesson plan by Maggie McAlister of Student Librarians and Information Professionals (SLIP) Ireland, the committee will debunk some of the myths surrounding the virus and how it is transmitted. It will take place at 6.30pm in LTEE2 in the Hamilton building.

Wednesday
Following on from the success of last year’s culture concert, Trinity Arabesque is back this year to collaborate with University College Dublin Arab Society for “Sounds of the Middle East”. Starting at 6pm in The Grand Social, the event will feature performances of Arab poetry and music in celebration of the region’s unique culture. Tickets are €10 on Eventbrite, or can be bought for €12 on the door.

Jailbreak, the fundraiser in aid of Saint Vincent de Paul and Amnesty International, is back in 2020. Applications are open, and organisers will hold an information night for potential applicants and participants to learn more about what the competition involves. The talk will take place in the Thomas Davis Theatre at 7pm.

Thursday
At 6pm, the Atrium will play host to Trinity Visual Arts Society’s (VisArts) Sketchbook Project exhibition, in which the sketches of the society’s members will be put on display for attendees. Refreshments in the form of wine will be provided.

Trinity Classical Society, in collaboration with Trinity Jewish Society will host a screening of Monty Python’s Life of Brian, the 1970s cult classic. The event, beginning at 7pm in Room 5025 in the Arts Block, will be followed by a discussion of the cultural significance of the film today and at the time of its release.

Friday
It’s the last day of Rainbow Week, and Q Soc have one last panel discussion to round it off. Starting from 6.30pm in Room 3051 in the Arts Block, “Intersex 101” will consist of a talk by Clara de Barra from Intersex Ireland on the meaning of the word Intersex, and how to act as an ally to members of the Intersex community in Ireland.

To fund its weekly coffee hours, Trinity Literary Society (LitSoc) is hosting a unique fundraising event – a 24-hour lock-in in the Attic of House 6. Starting at 1pm, this event provides a rare opportunity to stay around college after midnight, and using the time to write, play board games and meet the LitSoc’s members. The society will be taking donations throughout the day to support the continuation of its weekly coffee hours.