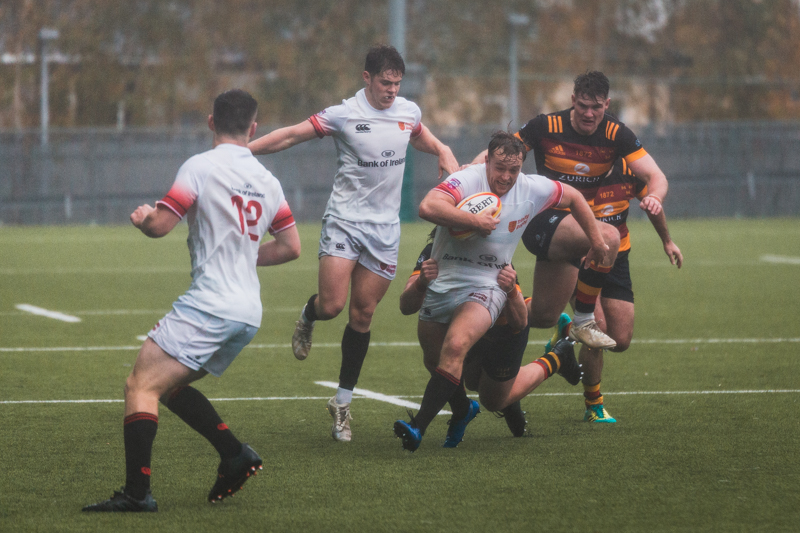 For the second week in a row, James Fennelly came to the rescue – his drop goal from just outside the Lansdowne 22 handed Trinity their second victory of the AIL season against a team they lost to twice last year.

As the game kicked-off in the shadow of the Aviva Stadium, the home side started the quickest. Within two minutes, Lansdowne were over the line for the first try of the match. Harry Brennan’s dart down the wing set up Peter Sullivan to finish the move. Tim Foley was unable to add the extras, but Lansdowne’s blistering start spelled trouble for the away team.

Trinity immediately moved the play back to the Lansdowne half after the restart, with Mark Nicholson and Max Kearney combining to break into the 22. The pressure earned the away side a penalty, but Michael O’Kennedy’s kick was wayward.

Lansdowne came again: this time Foley’s weighted kick in behind the Trinity backline almost found James Reynolds, but Fennelly, playing at full back, did just enough to halt the move. The referee pulled play back for an earlier infringement, however, and Foley was able to extend Lansdowne’s lead to eight from the tee.

Now wielding a commanding lead, the home side looked to put the game out of sight early. O’Kennedy was unable to collect a kick from distance in his 22, and Lansdowne’s James Reynolds was on-hand to capitalise on the loose ball. The ball was moved across the field with pace, with former DUFC player Dan Sheenan heavily involved. A try looked certain, but a titanic effort from the DUFC backline held up Lansdowne at the line. Trinity forced a knock-on and survived unscathed.

Despite struggling to get points on the board, Trinity looked sharp throughout the opening stages. Some promising forward moves and success in the scrum presented a possible route back into the game.

With half an hour gone in the game, Trinity’s persistence paid off. After Lansdowne collapsed a scrum in their 22, O’Kennedy opted to kick for the corner as DUFC searched for their opening try. The subsequent line-out was secured, and a powerful DUFC maul drove for the tryline. Mark Nicholson, at the centre of the move, carried the ball and grounded for five. O’Kennedy made sure of the conversion, pulling Trinity right back into the match. 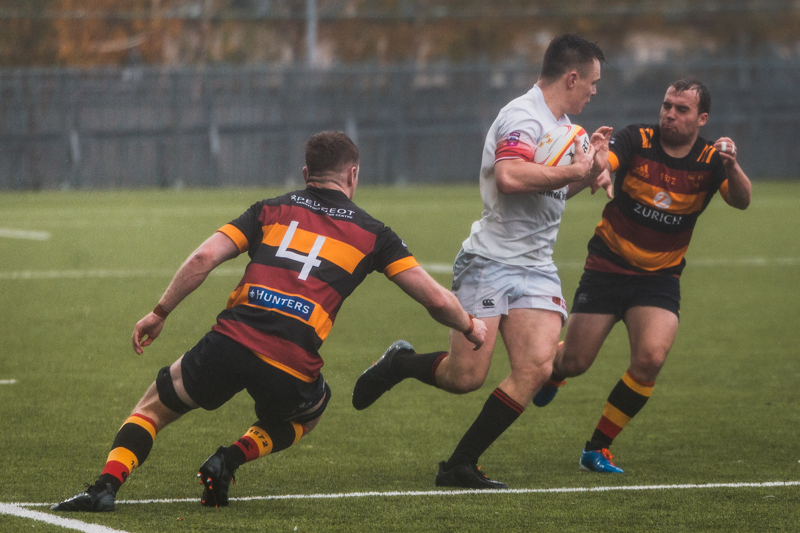 Bolstered by the try, Trinity looked for another before the break. Colm Hogan was at the centre of the action as play was contained on the Lansdowne 22. Trinity’s strength in the scrum again presented opportunities, but the handling errors halted further progress. The half-time score read 11-7.

After the restart, Trinity continued the push for a second try, enjoying most of the possession. Fennelly looked to create an opening on the flank, kicking towards Hogan racing down the line. The ball slipped from his grasp, however, and Lansdowne were able to build again from the back.

Having lost their commanding influence on the match, Lansdowne attempted to recapture their early dominance as the half wore on. Moving forward with urgency, they won a much-needed penalty within scoring range. However, Foley was unable to convert.

Determined to make something of their dominance, Lansdowne continued to press. A rapid move down the flank saw substitute Tomas Killeen rush over the tryline, but to the dismay of the hosts, the referee disallowed the try for a foul in the build-up.

The disallowed try was a let-off for Trinity. Despite try-scorer Nicholson being forced off after suffering a bad shoulder injury, momentum swung back to DUFC with 20 minutes left to play. O’Kennedy opted to kick from the tee when Trinity won a penalty right in front of the posts, cutting the gap to just one point.

With 10 minutes to go, tempers began to flair up with the game on a knife-edge. The audible travelling support willed their side on – O’Kennedy found touch with a crucial kick from distance to move play to the Lansdowne 22. The breakdown from the line-out resulted in another DUFC penalty, presenting O’Kennedy with a chance to put his side ahead for the first time. He dragged his shot narrowly wide – with minutes remaining, the game seemed to be slipping away.

Trinity did not throw the towel in. A spectacular break from Patrick Hamilton shifted the play right back into the Lansdowne 22. Now under immense pressure, the hosts tried desperately to suppress Trinity’s push for the line. Louis O’Reilly chose his moment perfectly – tossing the ball out to Fennelly in space, and the full-back split the posts with a composed drop-kick. Raucous celebration ensued.

Trinity controlled the dying seconds of the game expertly, seeing out the tie to secure a 13-11 win.

After a rocky start to their AIL campaign, DUFC seem to have turned a corner. This victory against Lansdowne is especially impressive, given they lost heavily in this fixture last season, falling to a 66-33 defeat.

Now on a winning streak of three matches, DUFC will face their biggest test yet this season when they travel to face Cork Constitution next week. The last time these two sides faced off was in the AIL Division 1A semi-finals, when Cork emerged victorious by a scoreline of 23-3. DUFC will be hungy to break Cork’s perfect start to the season, build on current momentum and avenge their semi-final defeat.