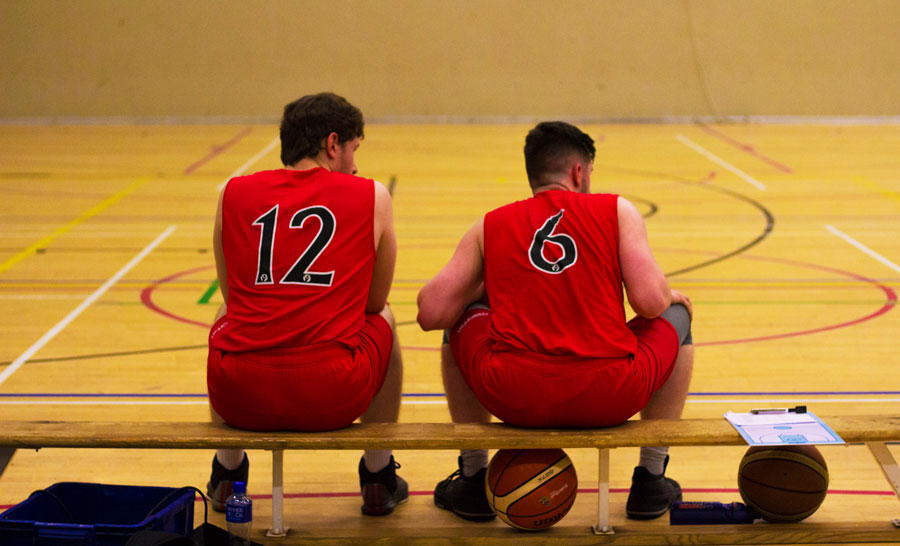 The first quarter proved to be the most competitive period of match. Three-pointers from Trinity’s Michael Carty and Darragh Murphy for Oblate set the pace in the early phases. Oblate, for their part, cleverly used physically imposing centre Shane Briggs, winning a number of free throws and bringing themselves back into the lead at 14-13.

Trinity began to pull ahead in the final minutes of the quarter. Carty led the charge, making a number of drives through the lane. Oblate were unable to deal with the barrage of offensive moves, and were forced to foul in an attempt to thwart Trinity’s dominance. Converted free throws from Sam Wolfram and Carty helped Trinity to a 27-18 lead at the end of the quarter.

Trinity looked to consolidate their lead after the restart. Clément Gabriel opened the scoring in the second quarter, scoring off the glass after breaking down the court from the Trinity half.

Nacho Moran was the key player for Oblate in the second period. Although he won a number of free throws, the away side’s reliance on Moran and their other centres limited their offensive options.

The best move of the second quarter came midway through the period: Carty combined with Louis Siebenaler to move the ball rapidly around the three-point line, before finding Niall Hunt under the basket who made the score.

Trinity continued to press, the game steadily slipping away from Oblate. Carty stole the ball from Alan Coffey in the centre circle before laying off to captain Robbie Fidgeon-Kavanagh on the endline. Fidgeon-Kavanagh composed himself and sunk a three-pointer, stretching Trinity’s lead to 19 points.

Gabriel almost had a three-pointer of his own soon after, but his shot licked the rim. Jaime Viegas was on hand to mop up and make the layup. The quarter ended with Trinity now firmly in control of the tie, the score reading 53-28 in the host’s favour.

Carty continued to batter the Oblate defence in the third. Georgios Ikonomou and Hunt assisted as he scored five points within the opening minute. After his superb bounce pass to set up Carty, Hunt had his own chance moments later, making it 60-28 with a floater off the backboard.

Play began to slow up as the quarter wore on. Oblate’s Cian Murphy attempted to rally his team with some impressive individual scores, but the away side were beginning to lose hope as the gulf between the teams continued to expand. Ikonomou, playing as point guard, led the play in the final minutes of the third, guiding his side to a 71-38 advantage going into the final period.

Oblate’s Murphy again tried to launch a late resurgence from the away side in the fourth quarter: His three-point attempt rattled the rim, but with the help of Aodhan Bolger he recovered to make a layup soon after.

The away side did enjoy the majority of the possession in the final quarter, but their lack of attacking options stunted any prospect of a comeback. Trinity were patient with the ball, with Conor O’Neill ensuring that the scoreboard kept ticking over for the home side. The teams traded points as the clock ran down, and the buzzer sounded with the score reading 78-46 in Trinity’s favour.

Speaking to The University Times after the match, Carty praised his team’s performance: “That was just a great team win. Everyone from the first five to the twelfth man played the same, same energy and same heart. We put it all out there.”

Trinity’s next test will be away from home against Eanna Basketball Club.