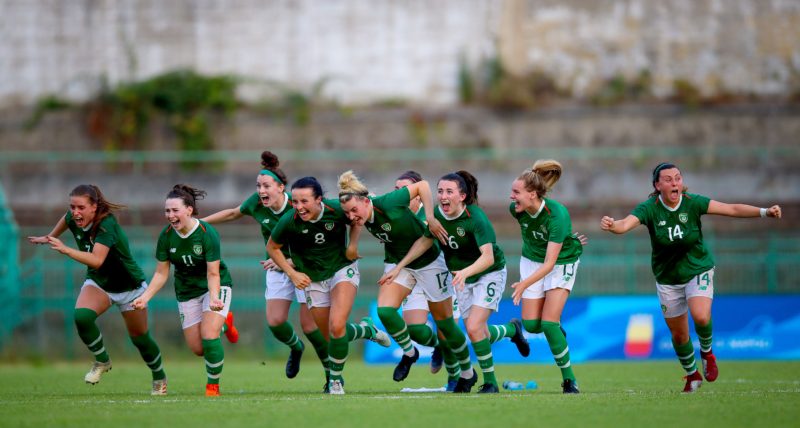 An average week for Sadhbh Doyle, one of Trinity’s newest sports scholars, looks something like this: several training sessions with Trinity Women’s Soccer is coupled with the workload of her academically intensive course, dentistry. Once the weekend hits, she commutes back to her native Galway to train with her home team, Galway Women’s Football Club.

On Saturday, she starts for the Connacht side in the Women’s National League, the top flight of women’s soccer in Ireland. Her weekly schedule, in other words, is non-stop.

It wasn’t always like this – just last year she was studying closer to home in NUI Galway. However, after a year in Galway, Doyle decided that biomedical sciences wasn’t for her, and started exploring her options elsewhere. Trinity’s sports scheme was something that piqued her interest, and when she was accepted to study dentistry she was also rewarded with a sports scholarship.

“I wouldn’t say I was expecting it, but during the summer I had a look because I was thinking of going to Trinity, so I had a look at their sports programme. What they were offering – facilities and stuff – and when I saw they were offering a scholarship, I just decided to apply, and thankfully I got it and I’m really happy about it.”

Doyle has yet to reap the full benefits of the programme, but her first impressions are positive: “I’ve used the gym a good bit. I’m meeting Ross Hamilton, who is the head of the programme on Friday, and will probably be getting a programme done. The gym is really good and the elite room too, and the money as well so I was delighted to get it.”

Balancing sport and academics is a challenge for any student athlete, but for Doyle the added commitment to her home club makes her new life in Dublin that extra bit trickier: “Compared to last year, my course wasn’t as full on, but this year there is a lot more hours so it is tough.”

For Galway Women’s, in terms of dedication you have to show up. It’s not just recreational – it’s a lot more serious

“You have a long day and then you have to go and do training when you‘re tired, so it is tough in that way, but it is something that I have always done throughout school anyways so I’m used to it.”

“It can be complicated because sometimes there are matches on [in] Cork or Wexford or Dublin, so there is a lot of travelling to and fro”, she says.

Her commitment to Galway WFC has reaped rewards, however: Doyle helped the club to a fourth-place finish in the Women’s National League last season. Reflecting on what has been a season of growth for her team, she says: “Fourth place helps us next year for the cup. We won’t have to play a qualifying round to get into the quarter finals. I think we would want to be pushing on into the top three next year and be competing with the top teams in the league.”

“This year we were only three points behind last year’s winners, so we are starting to show up more in the bigger games too. We are getting more mature as a team too – previously we’d be one ahead and not really know how to manage a game, but we’re getting better in that sense too.”

Competing in the Women’s National League has been crucial for Doyle’s own personal development as a player. Playing with and against seasoned internationals in the league means there is very little room for error on and off the pitch.

I definitely think we can get some trophies this year, because there’s so much talent in the team – I was shocked when I came here

“For Galway Women’s, in terms of dedication you have to show up”, she tells me. “It’s not just recreational – it’s a lot more serious.”

“It is just more intense and you are expected to be performing at your best all the time, so there is a lot more pressure.”

“You have to always show up, you can’t really have excuses or have a bad day. You always have to give 100 per cent, and it’s great training with girls who have a load of experience at the highest level. They push you on and show you what is expected of you.”

With the end of the domestic club season approaching, Doyle can now turn her attention to college football, taking with her the invaluable experience she’s gained from playing in the top flight.

“The club season is over now so I am focusing on Trinity now – we have a really good team. Our main goal would be to win all our group games and qualify for intervarsities. We’d hopefully do really well there.”

“I definitely think we can get some trophies this year, because there’s so much talent in the team – I was shocked when I came here. It’s exciting to see what we can do together.”

Doyle’s success hasn’t been restricted to the domestic football scene, however: she’s also been a mainstay in the international setup all the way up from under-15 to under-19. While she plays as a midfielder for Galway, she steps back into the centre of defence for her country.

When I ask her about her first encounter with the international system, she admits that is was a daunting prospect: “It was really scary actually. You’d be going up to trials in Dublin and you wouldn’t know what to expect, it was quite intimidating. Then they start introducing you to stuff like strength and conditioning and healthy eating. You’re like 15 and saying: ‘What is all this?’”

It’s just when you play against teams like the Netherlands and Spain: it’s such a step up, it’s crazy

“It was hard to adapt to that, but it’s really enjoyable because you get to meet lots of girls your age and have such good craic on the trips away. Some girls I played with, we went up all the age groups together, so [it] is nice in that way.”

Doyle has learned her craft at the highest level, playing against the very best around the world at her age group for several years: “I’ve been playing in elite tournaments and qualifier tournaments. The best that we did was getting to the European finals equivalent. We were one of the final eight teams – that was at under-17 level.”

“At the younger levels, it’s just friendly tournaments, but from under-17s onwards you get to qualifiers and you have to win your matches to get somewhere. It does bring that added pressure, but it’s nothing you can’t handle”, she tells me.

“It’s just when you play against teams like the Netherlands and Spain: it’s such a step up, it’s crazy. They are just so technically good and so hard to mark – it’s such a learning curve because they’d be training everyday with the likes of Barcelona, so it just shows you what level you can strive to be at.”

While Doyle is eyeing a jump to senior level, she does concede that it is both a difficult and risky prospect: “There is a big jump to seniors, so it’s hard to bridge that gap when there’s no under-21s.”

“It’s quite hard, because more and more now if you want to make that jump you have to think about turning professional. But when you want to get a degree as well, it’s difficult to balance and get everything right.”

“There are a lot of players in Ireland that do manage to make it, but you have to work really hard. Of course it’s something that I’d love to do, but importantly I’m focusing on my degree now, so I’m not stuck for something to do when I’m older.”

So for now, dentistry is the name of the game, and has the weight of Doyle’s attention, alongside the small side interest that is playing football at the highest level in this country.